We’ve reached mid-May, and what a great week it has been for us! We only had two losing signals and made an outstanding 422 pip profit, which puts us back on the right track to a strong monthly finish. The US economic data improved this week and that gave the USD bulls a reason to take the Buck higher… these moves correlated with the logic and fundamental analyses. So, that made trading pretty easy for us this week and the results speak for themselves. The outlook for the global economy also shines a little brighter now. We hope that the economic data keeps up with this positive trend, but nothing is set in stone. You can read this week´s market and economic data analysis below to build an opinion for yourself. 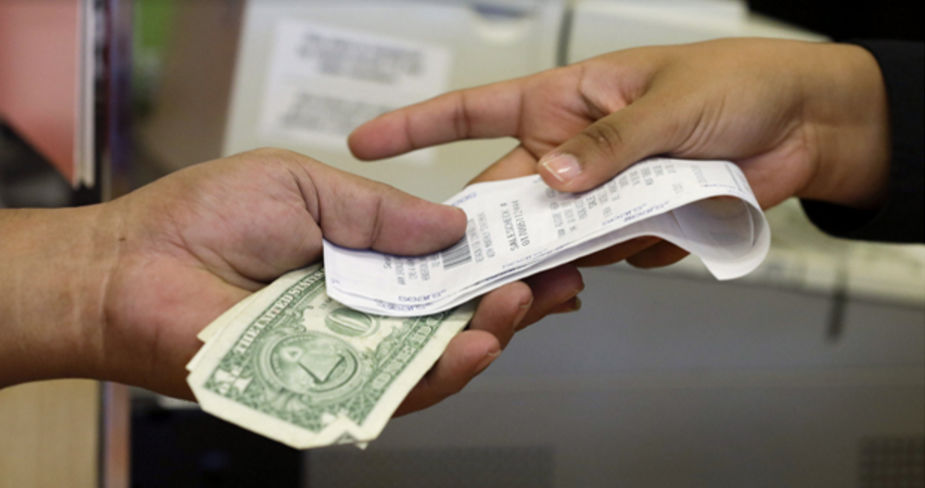 Has the US consumer finally decided to spend?

The price action in the forex market started to trade in a more rational manner by the end of last week and this luck spilled over into this week as well. As a result of this easy trading, our forex signals performed pretty well. We opened 18 signals this week with only two of them hitting stop loss, and the rest closed in profit. That gives us a great win/loss ratio of 89:11. But the sweetest part were the profits we made. As we mentioned in the opening paragraph, we made a staggering 422 pips this week. Nearly half of the profit came from two long-term forex signals: the EUR/USD sell signal and the USD/JPY buy forex signal. If we had let the EUR/USD signal run until the end of the week, the profit would be about 80 pips higher. There was also a very good opportunity for a 150-200 pip profit when USD/CAD retraced to 1.2770 on Thursday before it surged to 1.1950s on Friday – but hey, you can´t get every pip and in fact, you shouldn´t obsess over this fact. That will make you overtrade which is a mistake of many beginner traders. A 422 pip profit is more than enough for us. Apart from Friday’s minor loss, we closed every day in profit; we made around 75 pips on Monday and Wednesday while on Tuesday we made 172 pips and 119 pips on Thursday.

Last week, the US Dollar started to gain ground after touching the lowest level in nearly a year against most major currencies on Tuesday. USD/CAD declined to 1.2460 on Tuesday while USD/JPY graced 105.55 and EUR/USD climbed to 1.1616. But by the end of last week, the US bulls regrouped and started to push trades higher… and we entered this week with a positive sentiment towards the Buck. The Japanese Yen was the first victim of the USD strength this week, as USD/JPY raced to 230 pips on Monday and Tuesday. The other majors were consolidating during most of this week against the USD, but they failed to take the advantage even when the US employment report disappointed, and that was a key sign that the market was favouring the US Dollar.

When the US retail sales data beat expectations on Friday there was only one way the majors would go against the Buck – down. Their decline started immediately following the data and most of them closed the week near the lows. The Canadian Dollar, in particular, is feeling pretty heavy. The oil prices recuperated last week´s losses and closed at their highest levels in more than six months, but the CAD couldn´t benefit from this. So, if the oil prices start heading south again, the Canadian Dollar will be in big trouble. Another sore loser this week has been the British Pound – but with the Brexit referendum coming up that´s not a surprise.

This week has been pretty light regarding the economic data, but the most noticeable thing was the jump in the US retail sales and in the consumer confidence. The employment in the US has been growing, unemployment has been falling and the wages started picking up recently. But all this hasn´t translated into more cash at the shop tills, and this was a worrying sign suggesting that the consumer was being cautious and saving up. On Friday, the retail sales data jumped 1.3% from -0.3% expected and, thus, the previous numbers were revised higher as well. The consumer sentiment also jumped to 95.8 points from the 89.9 expected. This shows that the US consumer is feeling more confident and they are starting to spend. That´s a great sign because we know the power of the US consumer. They can pull the US economy up and give a helping hand to the global economy. Another thing to notice this week was the miss in the UK manufacturing sector, but that is not a real surprise. The manufacturers are putting things on hold until the Brexit vote, and the 6% decline in German investment in the UK paints a clearer picture.

We haven´t had a technical look at EUR/GBP in quite a while, and since the Brexit referendum is coming up we think it´s time to have a look at it. This pair has been in a downtrend in the last seven years, fuelled by the divergence in both economies and the monetary policies of respective central banks. In the last several months, though, we have seen a rally due to the Brexit referendum looming near. Right now, the price is right below the 50 moving average (MA) in yellow in the monthly chart. It has tried twice but it has slipped back below it again so that MA is proving to be a strong resistance. The stochastic indicator is also overbought which is a sign of a possible reversal. The referendum will be held in about a month, so if the polls suggest ‘stay’ voters are increasing then the reverse might be fast. 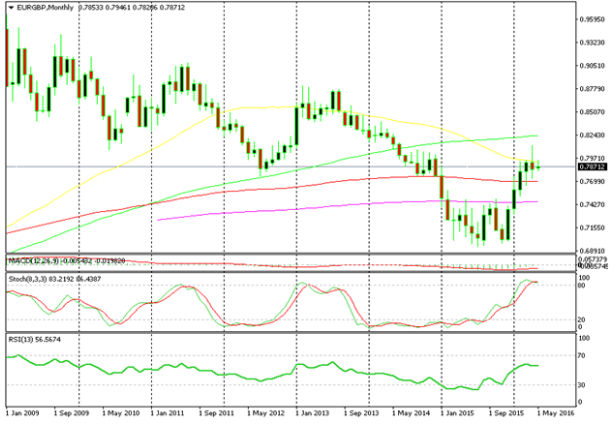 The 50 MA is providing strong resistance 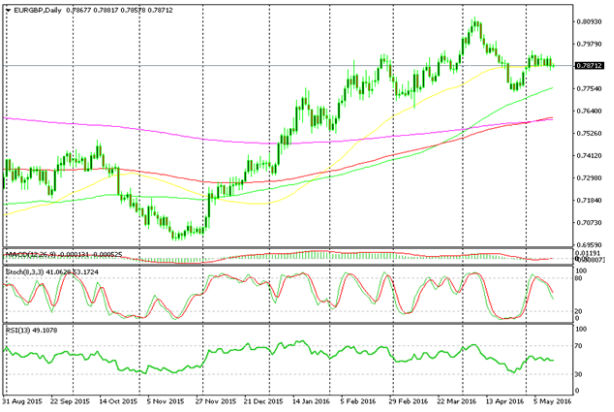 In the last three months, the price has been consolidating after the uptrend

As we pointed out last week, EUR/USD has been retracing up during this year after a strong downtrend of the last two years. It touched the 100 MA in green last Tuesday but quickly reversed down, forming an upside-down hammer candlestick. This week´s candlestick has reinforced our bearish bias towards this pair. But it´s not fully confirmed until the price breaks below the 50 MA in yellow (on the weekly chart), which comes at around 1.1120-30. Then it must break below the 1.1050 level, which has been strong resistance last year… and now has turned into support. In the daily chart, the first support line is the 50 MA at 1.1290 and then  comes last month´s low at 1.1220s. The US economic data will be the deciding factor. 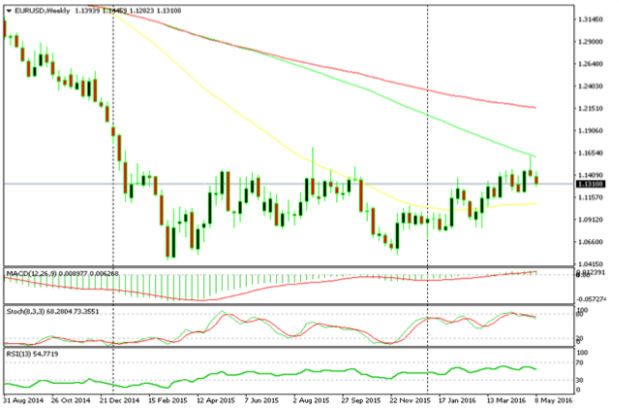 The 100 MA has reversed the price down 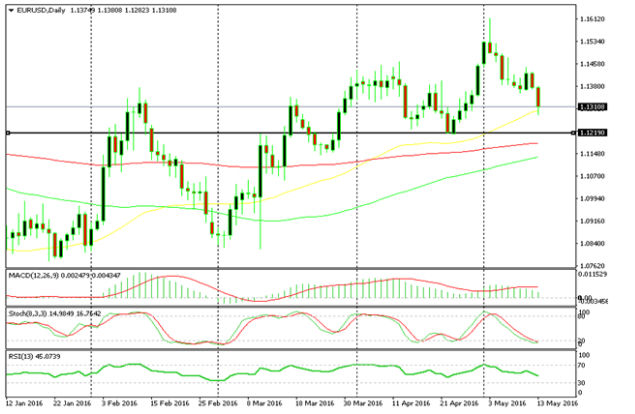 Here we are at the end of the second week of May, building profit as the month progresses. We made a nice 422 pip profit this week and hope that you took full advantage of our forex signals. It´s been a good week with a rational price action in the forex market and we hope it continues the same way next week. It will be all about the inflations numbers, so we´ll see whether the inflation is picking up around the globe and trade accordingly. Monday might be quiet, though, as most of the European markets will be closed in observance of Whit Monday.