Who asked for action, or wanted volatility in the forex market? If you’re one who thrives on adrenaline, then you were a happy camper this week. We had a near Brexit fallout at the beginning of the week but Theresa May came to rescue as the newest British PM, quickly replacing the foreign secretary with Tory MP Boris Johnson. So, a true conservative, anti-Brexit campaigner is leading the move out of the EU.

The Japanese government and Bank of Japan (BOJ) pledged for additional fiscal and monetary stimulus to help the economy and this request sent the JPY about 600 pips higher. The French suffered another attack on Bastille Day; it´s not clear yet if it was a terrorist attack but the death toll is currently set at 84, with more injured.

Do you want more uproar? On Friday, the Chinese and the US economic data surprised everyone by diminishing the fears of a global economic slowdown. Not enough? Well, the week ended with a military coup in Turkey and the Turkish Lira in one heck of a free fall. Despite all this… we had a pretty good week regarding results of our forex signals, making 140 pips in total. 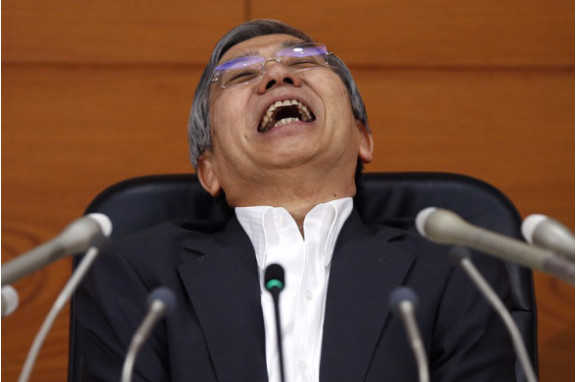 We ended a successful week on Friday with our 140 pip profit. We closed every day in profit apart from Friday when we lost a forex signal (which left a bitter taste). But, we can´t complain and so far we are 167 pips up for the month so far, with two weeks still left to go.

The Japanese government and the BOJ announced that they would take additional steps to help regenerate the Japanese economy. The Yen quickly shot up from the lows at 100.50s, and we lost a good opportunity to open a long-term buy forex signal.

But we decided to take advantage of this move and opened short-term forex signals during these dips, to gain around 600 pips on USD/JPY. The catch was the timing, which meant finding out when the retrace was finished. On Monday, when the move was very fast and the uptrend very strong we decided to use the five-minute forex chart since the dips were very shallow. 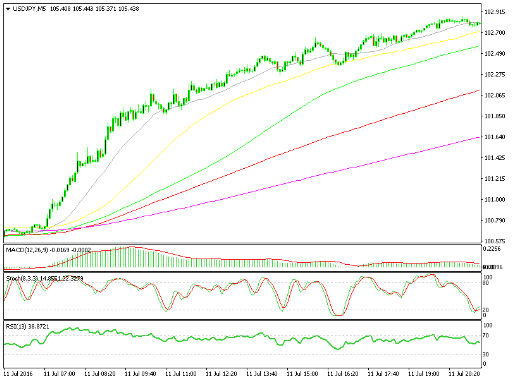 During strong trends, we advise you to use the smaller timeframe forex charts

You cannot discern such shallow dips on the H1 or H4 charts, so that´s the reason we changed to the five-minute forex chart. As you can see, the 20 MA and the 50 MA provided strong resistance. The other days we used the H1 forex chart because the move slowed somewhat and it became easier to spot the retraces. We had four winning forex signals in this pair. In total, we had 16 forex signals, 12 of which closed in profit and for hit stop loss. That gives us a 75:25 win/loss ratio.

The Market this Week

This week we had a lot of events which increased the volatility in the forex market, particularly in some forex pairs. Last week, all the Brexit campaigners resigned from the race for Prime Minister, so many thought that Brexit might not happen at all. This week, Theresa May was left as the only candidate remaining for the post of the British PM.

Another important event for the forex market this week was the agreement between the Japanese government and the BOJ to go even further with the monetary easing program. A few weeks ago the BOJ president Kuroda made comments that the monetary easing and the negative rates are not really working, yet he promises more of it now. You cannot trust the central bankers nowadays can you?

The BOJ even had a two-day meeting with the former FED chairman Bernanke who is notorious for the helicopter money program that the FED launched during his time. Is BOJ planning helicopter money too? On top of that, the Japanese Prime Minister Abe, who initiated of all of this, promised a fiscal stimulus program to go hand-in-hand with the BOJ monetary easing program.

There were some tragic events this week as well. On Thursday, a French Tunisian drove a lorry across the boulevard in Nice, France at a time when it was full of people celebrating the Bastille Day – killing 84 people and wounding many others. Although ISIS took responsibility for it there are no real connections between the killer and the caliphate. The Euro remained unfazed by the event, though.

On Friday evening, some of the Turkish military forces tied a coup surrounding the parliament with tanks and taking over the state owned TV. They failed, as the rest of the army and the population forced them to surrender, but the number of casualties was pretty high. Unlike the Euro, the Turkish Lira plummeted more than six cents.

Following the Brexit vote about three weeks ago, the forex market was expecting the Bank of England (BOE) to cut the interest rates on their first meeting in order to anticipate any possible forthcoming weaknesses. But the BOE didn´t cut the interest rates with eight out of nine members voting for status quo. A rate cut in August is pretty much on the table, though.

On Thursday, the US producer prices (producer inflation) numbers showed a 0.5% jump in June. On Friday, the consumer inflation remained unchanged from the previous month but the retail sales increased by 0.7% and with the recent uptrend we can say that the US consumer is starting to throw more and more money into the real economy. This will help other sectors of the economy which are struggling, such as the manufacturing sector. So, that´s a big check for the global economy.

We had some more positive economic data earlier that day. The Chinese GDP came out 0.1% higher than expectations and the industrial production beat the expectations by 0.3%. Forex traders who panicked in February have to feel a bit embarrassed now that we see that everything is just fine in China. This is the second big check for the global economy.

Three weeks ago, after the Brexit vote, GBP/JPY declined nearly 3,000 pips. Nearly half of that decline has been erased this week. One reason for this move higher was the announcement of additional monetary and fiscal policy loosening by the BOJ and Abe. At first, the 100 simple MA in green provided some resistance as you can see on the H4 forex chart below. After it was broken, the 100 smooth MA turned into resistance. On the daily chart, the move up this week looks impressive after this pair took such a beating a few weeks ago. But, the 20 MA in grey is providing resistance and the stochastic indicator is already overbought, so it looks like a good opportunity to issue a long-term sell forex signal. This pair is known as ‘the beast’ and it might move 1,000 pips up in a day, that´s why we will carefully evaluate this opportunity. 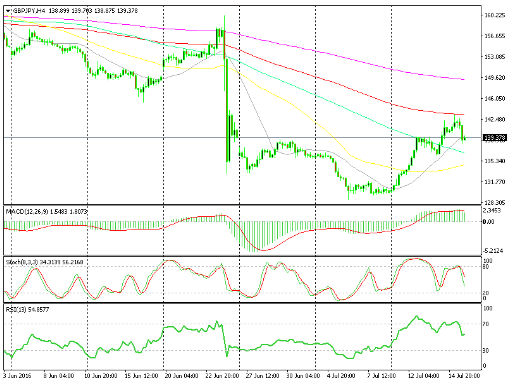 The 100 smooth MA is providing resistance 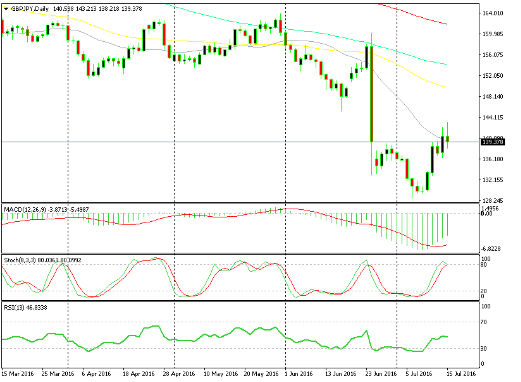 Will the downtrend resume soon?

The Canadian Dollar made an impressive comeback after the epic fall against the USD. But after bottoming out about three months ago it has traded in a 500 pip range since then. The range has been defined by the 100 smooth MA in red on top and the 200 smooth MA in purple on the bottom on the daily forex chart. The price is approaching the bottom of the range now and we are considering opening a long-term buy forex signal in this pair. On the weekly chart, the 100  simple MA in green has provided solid support and if the price gets near there then that will be a good signal to open a buy forex order. 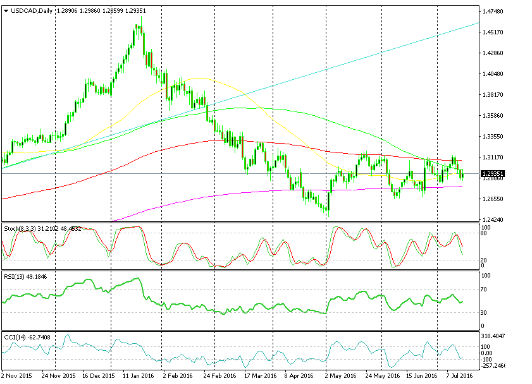 The price has been bouncing between the 100 and 200 MAs 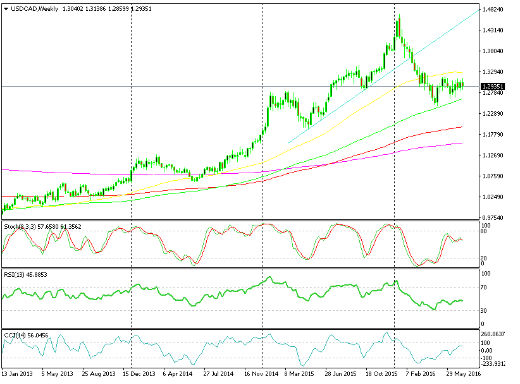 The 100 MA in green has provided solid support

There goes the third week of July. There were many events this week but we managed to make a 140 pip profit. The forex market was moved around by events, such as the additional fiscal and monetary stimulus in Japan. Other big events include the creation of the new government in the UK by an anti-Brexit campaigner who is hiring Brexit campaigners as her supporting staff and the failed coup in Turkey. There was some good economic data too; the impressive US producer inflation and the retail sales, together with better Chinese industrial production, offer the global economy some room to breathe.