Greetings to all of you who are following us, our analysis, market updates, and the forex signals. I hope you are having a great summer because I know the UK – or better to say the British economy – is not having a really sunny season. This week started with the horrible sentiment of the US Q1 GDP which was released last Friday. In my opinion, it doesn´t appropriately show the reality and it will be revised higher – as we have often seen happen to the previous prelim GDP estimations.

The UK GDP, on the other hand, has been revised down. Some financial institutions have even slashed it in half. The round of economic data we saw this week from the UK is not a surprise. The UK economy is going down a rough path, but at least the BOE took action and didn´t wait long until the downward spiral took its toll. Don´t know how much it will work but time will tell. Anyway, we received a nice bonus from the BOE and closed the week with a 48 pip profit. 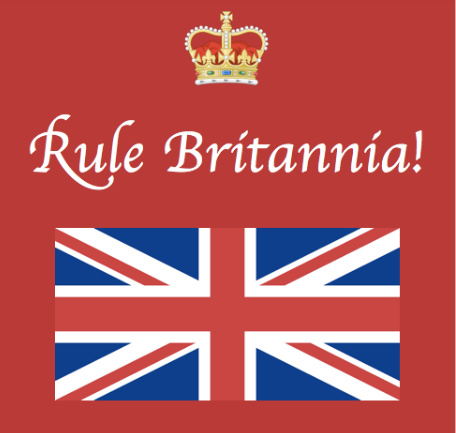 This was a tough week to trade. The forex market was driven around by the market sentiment in the first half of the week, while in the second half the fundamentals got the upper hand. I mean, it´s not easy to trade a forex pair when the central bank cuts the interest rates and the respective currency surges up 200 pips after an initial dip. That´s what happened to the Australian Dollar this week. We were struggling to find some good trading opportunities, that´s why the number of forex signals was low. We opened 13 forex signals this week, four of which hit stop loss, one still remains open and the other eight hit take profit and, all in all, we closed the week with a 48 pip profit. 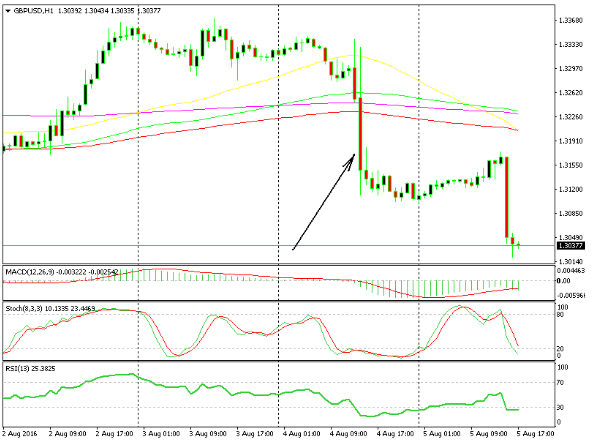 The BOE pushed GBP/USD lower and gave us 120 pips

The win/loss ratio this week stands at 69:31. That´s below our long-term average but the GBP/USD long-term sell forex signal made up for the low win/loss ratio because it brought us about 120 pips of profit. We opened this signal two days before the BOE meeting. There were two scenarios for this forex trade: in the first, the BOE cuts the interest rates and the GBP goes down. In the second scenario the BOE doesn´t cut the interest rates, and still, the statement and the press conference would suggest a September interest rate cut. It would be strongly dovish after the disappointing data we´ve seen recently after Brexit. Both the scenarios were bearish for the Pound. The first scenario happened and we got more than 200 pips from it. Our original take profit for this forex signal was below 1.30, so if you´re still holding this… you should be sitting on a 270 pip profit by now.

After the US Q2 GDP numbers missed their expectations by a long shot last Friday, the forex market naturally started the week with a negative feeling towards the USD and the attention was focused on the US economic data As we have seen so far, the US economy has bounced back from the Q1 slowdown and in Q2 it has performed quite well.

That´s one reason not to take the Q1 prelim estimate reading so seriously and I think they might as well not bother at all with the two preliminary GDP readings. Just the final one would be fine. Which brings us to the second reason why we should ignore the prelim GDP readings.  The first estimate reading for the Q1 was 0.5%, the second one was revised up to 0.8%, and the final number was 1.1%. So, do they really expect us to trust the first estimate?

Anyway, the forex market slowly shifted and the attention was placed on Australia. The Australian building approvals and trade balance missed badly on Tuesday but the RBA (Royal Bank of Australia) was a few hours away so all the projectors were there. The RBA cut the interest rates from 1.75% to 1.50%, yet the AUD kept surging the entire week after a quick dip during the knee-jerk reaction. Why? Because the statement wasn´t as dovish as the market had expected and the rate cut was now over. It is known as 'market expectations theory', which postulates that the forex market moves on future events and tends to ignore past events.

But, in everyone´s subconscious the main event this week was the BOE (Bank of England) meeting. At their meeting in July, which was the first meeting after the Brexit referendum, there was no evidence of the impact that Brexit is having and will have on the real economy. So they sat on their hands and biased to cut the interest rates, although they didn´t.

This meeting was different; the market and the BOE wanted to see more evidence and they got it this week. The manufacturing sector fell in contraction, which is not that big a deal since it´s share of the UK economy is pretty small. Construction fell deeper into contraction and this is the second month – which makes recession for this sector very likely. The worst thing is that this used to be the best performing sector of the UK economy for quite a long time.

But, the hardest to swallow was the contraction of the service sector. This sector, and particularly the financial subsector, are vital for the UK economy, so this is a tough blow for the British. The BOE had this foresight and they stood up, which in my opinion was the right thing to do, to face troubles early rather than let them accumulate. The cut the interest rates to 0.25% from 0.50% and increased the QE program by £70 billion, 10 of which will be corporate purchases (obligations, bonds shares) and 60 billion will be government purchases. The GDP for the H2 was downgraded to almost zero from around 1% in the prior report, which is the biggest downgrade ever from one report to another.

The BOE pledged for further action if the economy deteriorates. But this is one side of the coin, many analysts think that monetary policy won´t have a big impact unless it is backed by fiscal policy. So, now it´s the turn of the UK government to do its part. So there you go Theresa May, the BOE did their part and the ball is in your court now.

Although the projectors this week were focused on the US and the BOE, the RBA stole the show in the beginning of the week. The RBA cut the interest rates on Tuesday morning by 25 bps (basis points). You´d expect the Aussie to dive down, right? It didn´t… in fact, it surged nearly 200 pips in the next several trading sessions after a short-lived dip. The reason? The rate cut already happened and the statement wasn´t as dovish as the forex market was expecting.

Then, the spotlight was on Britain again. All three important data releases from the UK missed their marks. The construction, the manufacturing and (most importantly) the service sector contracted in July. The forex market, the BOE and everyone else was waiting to see how big the negative impact of Brexit would have on the economy. We all saw what happened and what´s to come in the months ahead, and the BOE didn´t wait too long. They cut the interest rates and extended the QE program. The Pound tumbled about 200 pips.

The US took a turn by the end of the week. We had some indicators which were pointing up, such as the ADP non-farm employment change on Thursday and the unemployment claims on Thursday. But Friday´s employment report gave the USD sellers the final blow. The employment number came at 255k against 180k expected, and the wages grew by 0.3% in July against 0.1% in June. The report was solid and, unlike last week, we closed this week with a USD positive sentiment.

GBP/USD has been in a range  between 1.3300-1.3350 and 1.3050 in the last three weeks. After a slow uptrend in the beginning of the week, this pair retraced to the 50 and 100 moving averages on the H4 chart. It then resumed the uptrend again and surged to 1.33050s on Tuesday. It stayed there until the BOE came on the scene. After the rate cut and the extra dovish comments this pair headed south, breaking below the 50 and 100 moving averages -and it even broke the recent support at 1.3050. On the daily chart, we can see that the 20 moving average in grey has provided resistance at first, then it turned into support and now it has turned into resistance again. If the dovish sentiment continues we might as well see the 1.30 resistance let go for good. 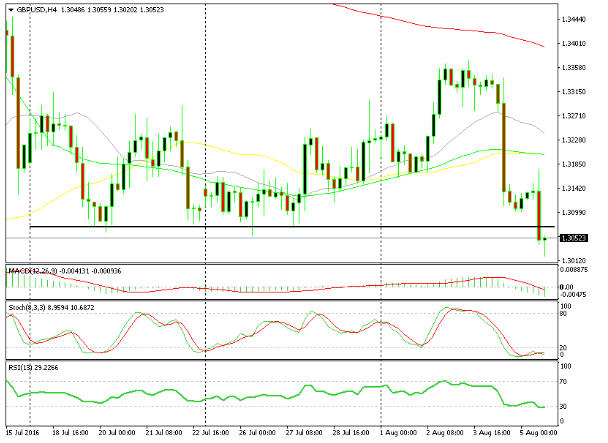 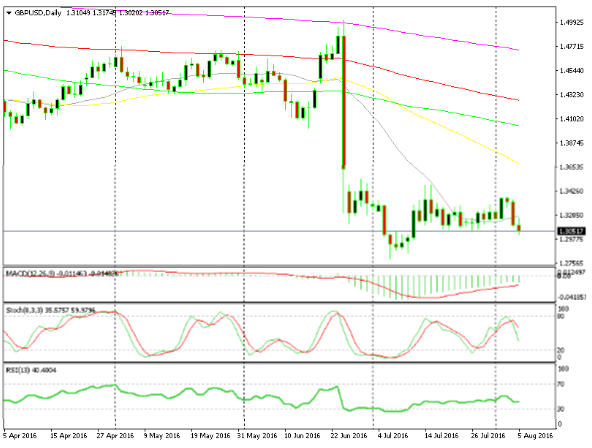 The 20 MA in gray has turned into resistance now.

USD/CAD has been in a downtrend in the last two weeks as we can see from the H1 forex chart. The moving averages have provided support during this downtrend, but once broken they have turned into resistance. The green 100 moving average, in particular, has been providing solid resistance. All this lasted until Friday this week when the US employment report really impressed the forex market and the Canadian employment report disappointed. That was a toxic combination and resulted in the USD/CAD shooting up by 200 pips and breaking all the moving averages very easily. This pair has traded in a range in the last three months but now it seems that the range it turning into a slight uptrend and the stochastic indicator is pointing up as well. 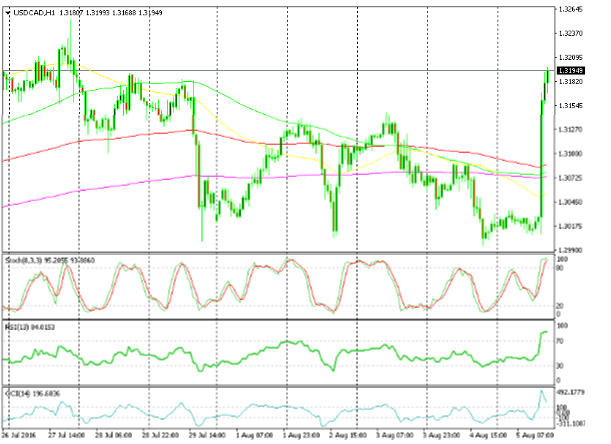 The downtrend is finally over 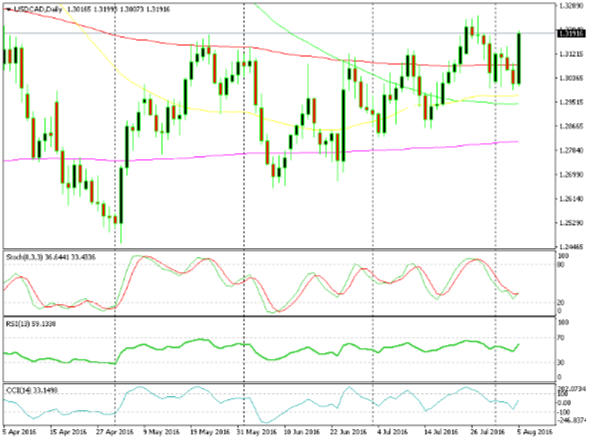 The three-month-old range is turning into an uptrend

This week started with a very negative feeling towards the US Dollar after the terrible Q1 US GDP preliminary estimate. As I´ve said before, I don´t really like this number and I think that the Q2 US GDP will be revised higher. The RBA cut the interest rates this month but the Aussie rallied anyway. But, all the attention this week was on the BOE. The economic data from the UK this week was disastrous and the BOE didn´t wait long. They cut the interest rates and extended the QE program by £70 billion. That´s not enough, so we´ll see in the coming weeks what the British government can do.