Why Did the Euro Pop? - Forex News by FX Leaders

Why Did the Euro Pop?

A couple of hours ago the Euro started to make a move higher, which soon accelerated and in about 5 minutes the price moved about 60 pips. It paused there for a few minutes and then resumed the upward move again, with EU/USD reaching 1.1239 in my forex platform. It took me by surprise because I had just opened the EUR/CHF forex signal and was setting the parameters there. We decided to open that signal because the stochastic and the RSI indicators were extremely oversold in the H1 forex chart and the previous candlestick formed an upside down hammer, all of which are sell signals. We missed the take profit target by 5 pips. 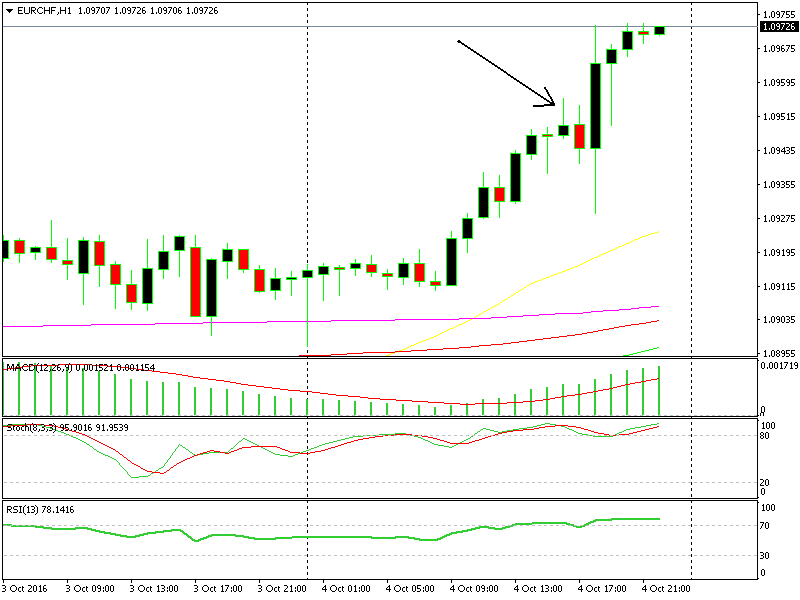 Only 5 pips away from the target

By the way, that signal doesn´t look that good now, but we didn´t know what was coming up. That shows you how forex works, one minute everything is fine, the next all hell breaks loose. Bloomberg published a comment from a mysterious ECB official who allegedly said that the ECB discussed tapering the asset purchase before it ends.

It all feels a bit dodgy because what we know so far is that the ECB wants to ease the monetary policy further by deepening the negative interest rates. Now this, it´s quite a surprise. If this is true then this is really big news, it´s a U-turn from them. We´ll see tomorrow how true these comments are, but that have already done some damage to our EUR/CHF forex signal. By the way, we´ll dig in tomorrow on this story because if it´s true this will be a huge shift.