Was Our US Inflation Analysis Accurate? - Forex News by FX Leaders

Was Our US Inflation Analysis Accurate?

In our previous market update, we took a deeper look at the US inflation report. If you didn´t read that, you can check it out here. We put on the table the three options (bad, normal and good) for the report and analyzed the impact on the USD depending on the outcome.

I had this feeling which came from the recent US and global events, that the numbers weren´t going to be great but they couldn´t be too bad either. The higher oil prices have driven the inflation higher all over the globe as we saw in the UK inflation report, but the inflation in the US isn´t exactly rocketing to the skies. It is slowly moving higher and that´s what I expected from this report.

The numbers were more or less bang on the expectations. The monthly core CPI (consumer price index) missed the expectations by 1 point but it moved a point higher nonetheless. The yearly CPI rose 1.5% from 1.1% previously and the core yearly CPI came out at 2.2%.

These are exactly fireworks, but these are some damn good numbers considering the global economic situation if you ask me. The core CPI is above the FED 2% target and the headline number is catching up too. The FED guys who are against tightening the monetary policy (hike interest rates) are running out of excuses. A December rate hike is already a done deal, but I mean that they are running out of arguments for keeping the tightening process very slow in the coming years.  Besides that, the earning grew by 0.2% versus a 0.4% decline last month.

Anyway, let´s wait till they`re done with the first rate hike before planning ahead. So, the inflation numbers were ok ant the US Dollar jumped about 60 pips. It initially lost about 15 pips as the immediate reaction after the release, due to the slight miss in the monthly core CPI numbers. But, that probably came from forex traders who were long on the USD taking profit since the data didn´t meet their expectations for better numbers. 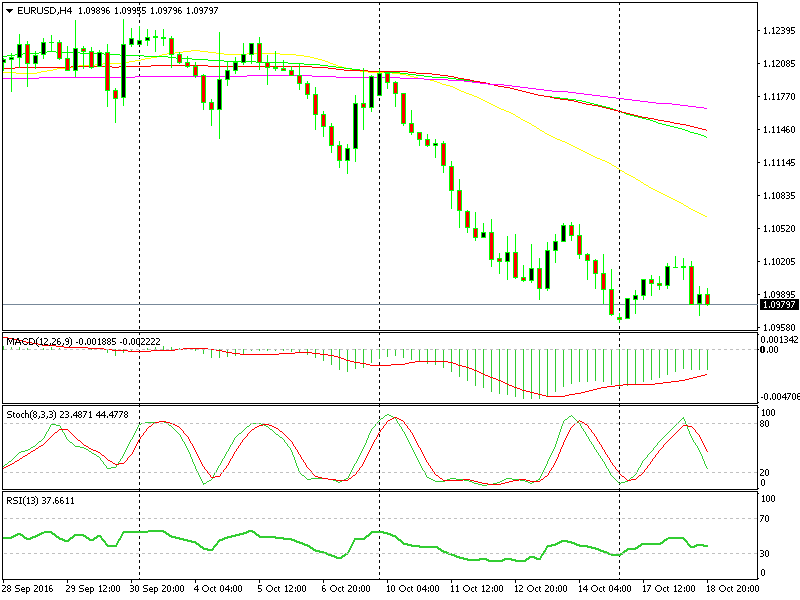 The technical and fundamental analysis aligned with each other today

In the previous update, I said that if the numbers are close to the market consensus then we might see some bids coming in for the buck, and that´s exactly what happened. A couple of hours later and USD is 60 pips higher against most major currencies.

If you opened a sell forex signal in EUR/USD after the release, you´d have easily made around 50 pips. We already had an open signal in this forex pair and it was closed in profit.

I´m not trying to show off and brag about my fundamental analysis, but this is the way we analyze trades in forex. We take into consideration the global situation (oil prices, risk sentiment, the global economy), the recent trend of the economic data, the market expectations, the technical levels etc and form an opinion. If we´re not very confident in the analysis, we wait until the data is out before pulling the trigger.

Today we had already pulled the trigger because after taking into account all these factors, we came to the conclusion that the US inflation numbers were going to be close to expectations and the USD would move higher but nothing special. That´s what happened, the numbers were just as expected and the buck moved 50-60 pips higher.

Check out our free forex signals
Follow the top economic events on FX Leaders economic calendar
Trade better, discover more Forex Trading Strategies
Related Articles
Factory Orders and Retail Sales Decline As Inflation Surges in Europe
The economic indicators are getting worse in Europe as inflation surges, which will weigh further on the Euro
21 hours ago