Draghi and the ECB Kicked the Can For the Last Time

It´s rollercoaster time again guys. The ECB (European Central Bank) president Draghi never fails to take us for a ride, as market expectations shift from positive to negative during his speeches. This has been the case for many of his official conferences and this was one of those.

The market got excited at first about a possible tapering process and the Euro surged 60 pips higher. But then, a few minutes later the sentiment shifted after Draghi denied that the ECB had decided anything, in either direction, and the big reverse started.

One thing led to another and EUR/USD ended up at 1.09 lows. That´s the lowest level since June after the Brexit vote. This is another strong support level after 1.0950 was broken. Below here comes 1.08 which is the ultimate support level.

At the moment this forex pair is making a retrace higher and the price is getting close to the 1.0950 level, which will likely turn into resistance now. The stochastic indicator is already overbought on the 15-minute chart and a number of moving averages are waiting about 10 pips above. We´re itching to open a short term sell forex signal right now. 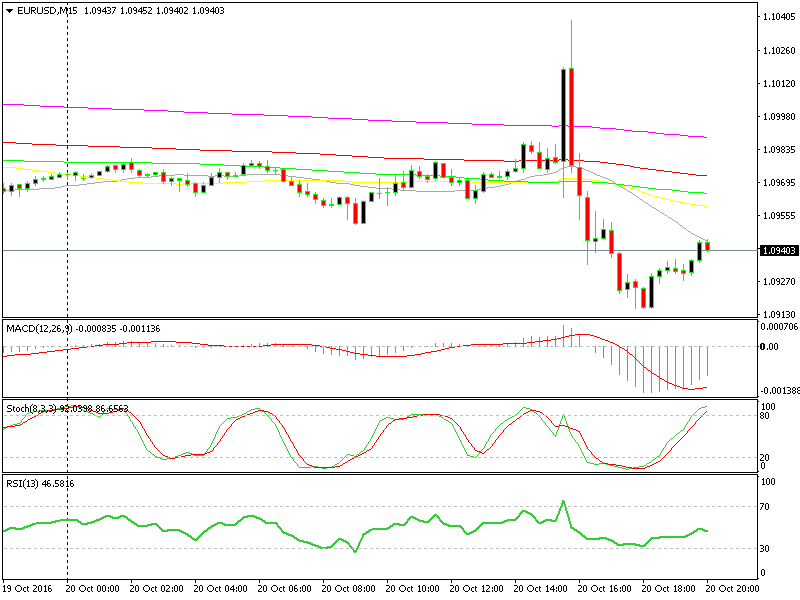 Will the 20 SMA be strong enough to bring an end to this retrace?

Update: We just opened the sell signal since the price reached the 20 simple moving average (SMA) on the 15-minute forex chart.

Update 2: The signal was closed manually for a 20 pip profit. I hope you guys followed it.

So, what did the ECB and Draghi say, or didn´t say? They´re both equally important in forex, you know?

To begin with, they left the interest rates unchanged. The deposit rate and the main refi (refinancing) rate remained at -0.40% and 0% respectively, while the monthly QE purchase remained at 80 billion Euros with the programme set to continue until March 2017. All that was broadly expected.

The interest was with Draghi´s press conference. There have been many assumptions lately, some rumours implied that the ECB would start tapering the QE purchases, but the timing remained a mystery. Well, we all know that the QE programme can´t go on forever. The time will come for it to end.

But the catch in those rumours was that if the ECB announced a starting date not too far away, then this would come as a total surprise to the forex market. It´s not hard to imagine EUR/USD trading at the 1.15 – 1.20 range in a few trading sessions if that was to happen.

Anyway, here are his exact words:

– We didn´t discuss extending the QE programme beyond March 2017

– There´s no scarcity of assets to buy for the QE programme, but if there will be in the future the ECB discussed the ways to overcome it

– The ECB hasn´t noticed any signs of bubbles

– We didn´t discuss the planned horizon of the programme

These were Draghi´s comments and answers to the questions from the press. The market had it´s afternoon fun time as the Euro took off at first, but then plunged really hard. Draghi kicked the can once more by not revealing anything. His comments were both dovish and bullish and in my opinion that was all intended. We know he´s the master of tongues.

So, these are the three elements of the ECB conference today, important for us traders. There´s one last element: it´s how the market took this speech and that´s most important for our future trading strategy of Euro pairs. But, we´ll cover that last bit in the weekly review, so have a look at it by Sunday.