Planning Your Trading Strategy For April

Last month, we published an article where we looked at the seasonal factors and patterns that impacted several currencies in March. We reviewed all previous petrol prices from March months in previous years, and the comparison to March 2016 was similar. We also took a look at USD/JPY and discussed the decline of the Japanese Yen in March 2016 against the US Dollar. This March turned out to be quite flat for USD/JPY. For this month, we will take a look at the petrol prices, as well as the commodity currencies, aka the Euro and the British Pound.

The price of petrol has been in a downtrend for about two years now, due to global economic slowdown and oversupply. However, April has been a good month for the prices. As we can see from the table below, the petrol price increased seven out of ten times during April over the last ten years. Even last year, which was the worst year for petrol in the last 15 years, the price surged by a whopping 25%. So, the odds are that the petrol prices will go up this month as well.

The price of petrol surged to around $42/barrel by mid-March but retraced back down to close that month at around $36/barrel. It’s the first few days of April and the price is already heading up again. We are at $37/barrel, with the fundamentals supporting the bullish scenario. The petrol-producing countries have planned a meeting this month to discuss production and export, and possibly a production freeze. If that happens, the price will surge and we know which currency will be the main beneficiary. The Canadian Dollar will fly if producers decide to limit production but I wouldn´t advise buying the CAD against the USD because the USD has already reached rock bottom. The best scenario would be to sell EUR/CAD. 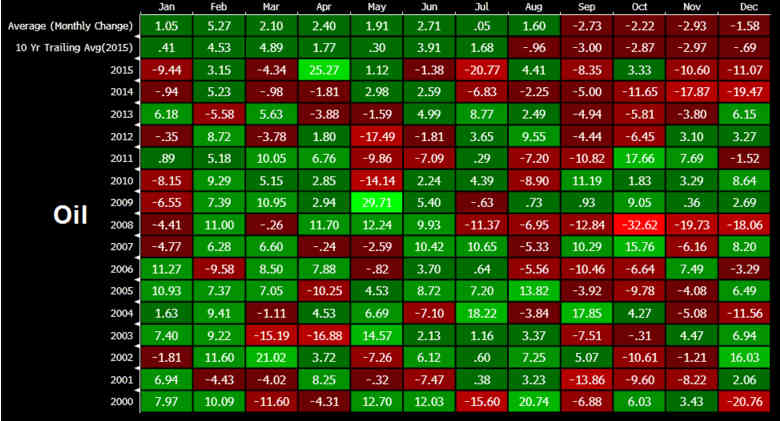 In the long term, April is a positive month for Petrol

The commodities and the commodity currencies already seem more positive in April. Maybe it is because the future looks a little brighter in spring and the appetite for risk increases? The Australian, Canadian and the New Zealand dollars all benefit from this positive market sentiment and try to make the most of it while they can, particularly against the US Dollar. So, the best forex strategy is to look for buying opportunities during dips.

The table below shows that USD/CAD has declined in 11 out of 15 occasions during the month of April. The last seven April months have been negative for this pair, meaning that the Canadian Dollar tends to get stronger during April. So, besides the strengthening petrol prices, this is another reason to buy this currency this month. 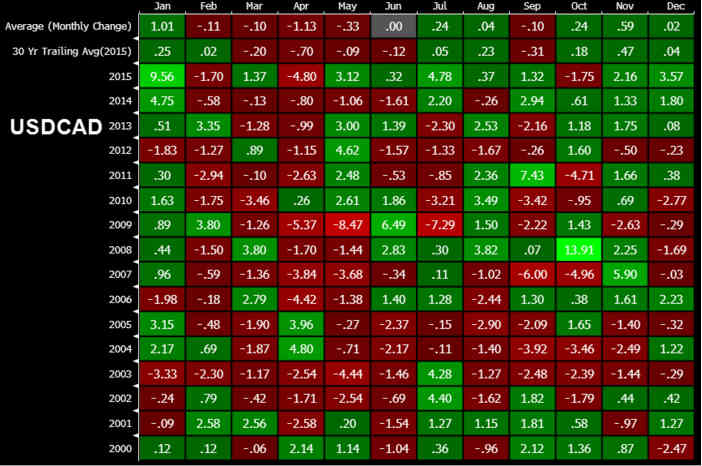 In the last 16 years, April has been the best month for CAD

Of all the currencies and other instruments in the financial world, April is particularly generous to the British Pound. As the table below suggests, GBP has appreciated against the USD in 13 out of the last 15 years. The average monthly gain for the last 15 years is 1.18% and for the last 30 years is 1.06%. The Pound has appreciated against the Buck in the last 11 April months but has only declined on two occasions.

This pair is at historical extreme lows, as you can see in the monthly chart below, and both the stochastic and RSI indicators are oversold and heading up, so the technical analysis points up as well. But, this is not a normal year for the Pound; the British referendum on leaving the EU will be held in June. The market is afraid of a “Yes” vote, as this may ruin the 11-month winning streak. 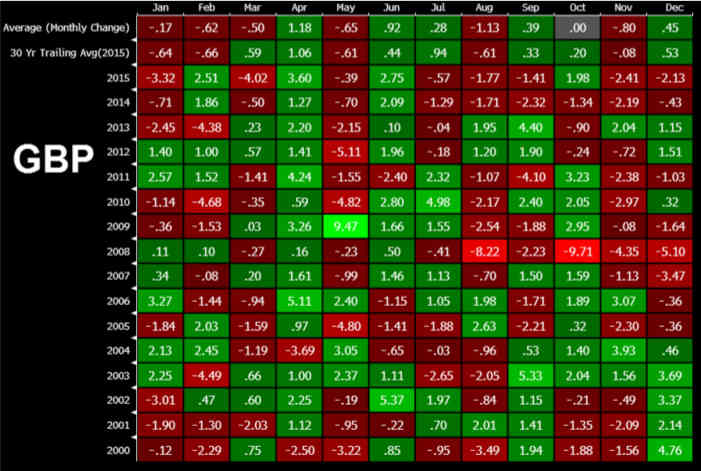 The GBP is the best performing currency for April months 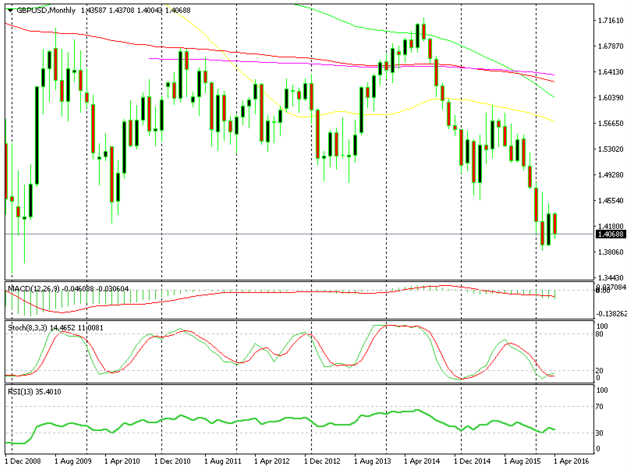 Stochastic and RSI are oversold and heading up

The Euro has performed pretty well in most April months over the past 15 years. EUR/USD was in a steep downtrend last year because the ECB had started the QE program, but even then the Euro managed to gain 4.59% against the Dollar. It is not the best performing month, but on average EUR/USD has gone up by 0.6% in April since its inception 16 years ago.

That said, the ECB doesn´t want the Euro much higher and they don´t feel comfortable even at these levels. Only today an ECB member popped up saying that the ECB might cut the interest rates again and that they have many more tools to use if needed. The technical analysis doesn´t want to support the idea of further appreciation either. EUR/USD is below a strong resistance level and, judging from the price action, we can say that it will fail to break it once again. When something can´t go up it will obviously go down. 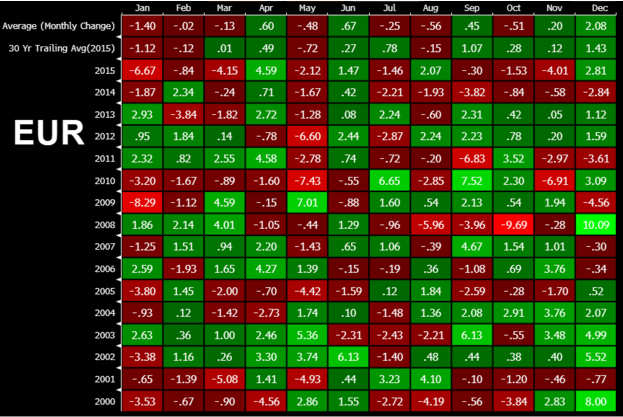 April is the 3rd best month for the EUR/USD pair 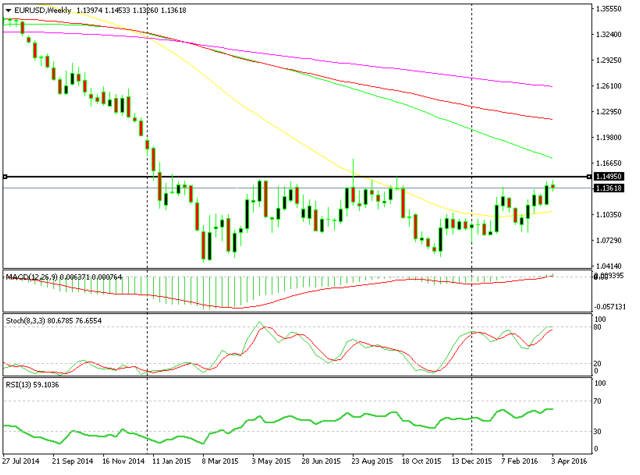 The 1.1450 resistance level seems to be holding for now

Looking at the seasonal factors for these currencies, petrol prices, and their tendency to put up a positive performance against the USD, it´s not difficult to see that the U.S. Dollar is usually the victim during April. In fact, April has been the worst month during the last 16 years for the Buck, so this great performance is partly due to USD weakness.

However, the technical analysis tells us that the USD is already oversold. This might change the bullish April pattern for the commodity currencies, petrol prices, and both the Euro and the Pound. The UK Brexit referendum is also an added risk for the GBP – while a failure to reach an agreement by the petrol-producing countries is a risk factor for the CAD. And, as usual, the ECB is always a risk for the Euro. So, it´s worth looking at the long-term patterns as an added exercise, but take them with a grain of salt.