Being one of the most volatile forex pairs, the [[GBP/JPY]] continues to offer some great trading opportunities. The volatility has decreased since 2016, compared with before that period, however, it still remains enormously high, compared to other pairs. In September alone, we saw an almost 10 cent decline, as the 50 SMA (yellow) rejected the price, following the post covid retrace. So, it seems like the larger bearish trend that started in July 2017 is resuming again, and moving averages have turned into resistance on the monthly chart. This pair still has some decent support levels to look forward to, one below 125 and another at 117, where the technical analysis points for this pair, although the fundamentals are a bit more complicated.

Recent Changes in the GBP/JPY Price

The JPY has benefited since 2017, especially following the 2008 crisis and Brexit, as the sentiment deteriorated in financial markets, and the Japanese Yen is a safe haven currency. The GBP on the other hand, is a risk currency, which goes in the opposite direction, hence the high volatility in this pair. The GBP has been on a bearish trend since 2016, since the Brexit vote, and the sentiment has been slightly negative, due to Brexit and the US-China trade war, which have benefited the Yen. We have issued quite a few forex signals, selling this pair during retraces higher during this time. The coronavirus made things more complicated, sending this pair crashing around 25 cents lower from December until March, and then reversing higher until September, but the pressure remains on the downside for GBP/JPY, as the charts show.

EUR/INR Price Prediction for the Next 5 Years


The UK is heading towards a dead-end regarding Brexit; Boris Johnson struck a Brexit deal with the EU last year, after Theresa May failed to get one in two years. But the Brexit deal means nothing without the trade deal, which it seems is going to be increasingly difficult to reach, as the deadline is approaching fast. If they don’t get a deal by December 31, then the sentiment surrounding the GBP will turn even more negative, but the markets will find out before the end of the year, from the comments by EU and UK officials. Right now, chances of a trade deal are pretty low, hence the bearish reversal during September. The coronavirus situation doesn’t look too good either, with the UK putting a curfew in place after 10 PM, which will hurt the nightlife and the restaurant businesses all over the country. So, looking at the situation from the GBP side, it seems bearish for now.

The JPY, on the other hand, is a safe haven currency, and it benefited from the weakening sentiment in September, as the global recovery after the reopening began to weaken as well. The recovery seems to be going well in the US, but Europe and other economies around the globe are softening considerably, particularly with the coronavirus hanging over our heads. This will continue to dampen the sentiment in the financial markets and provide support for the safe havens. The resignation of Japanese Prime Minister Shinzo Abe in September also helped the JPY, as the risk sentiment took another hit. The Bank of Japan is keeping interest rates at -0.10%, and there are no expectations that they will be cut further, which will uphold the safe haven status for this pair.

GBP/JPY Technical Analysis – The Bearish Trend is Still in Place, After the Rejection by the 50 SMA 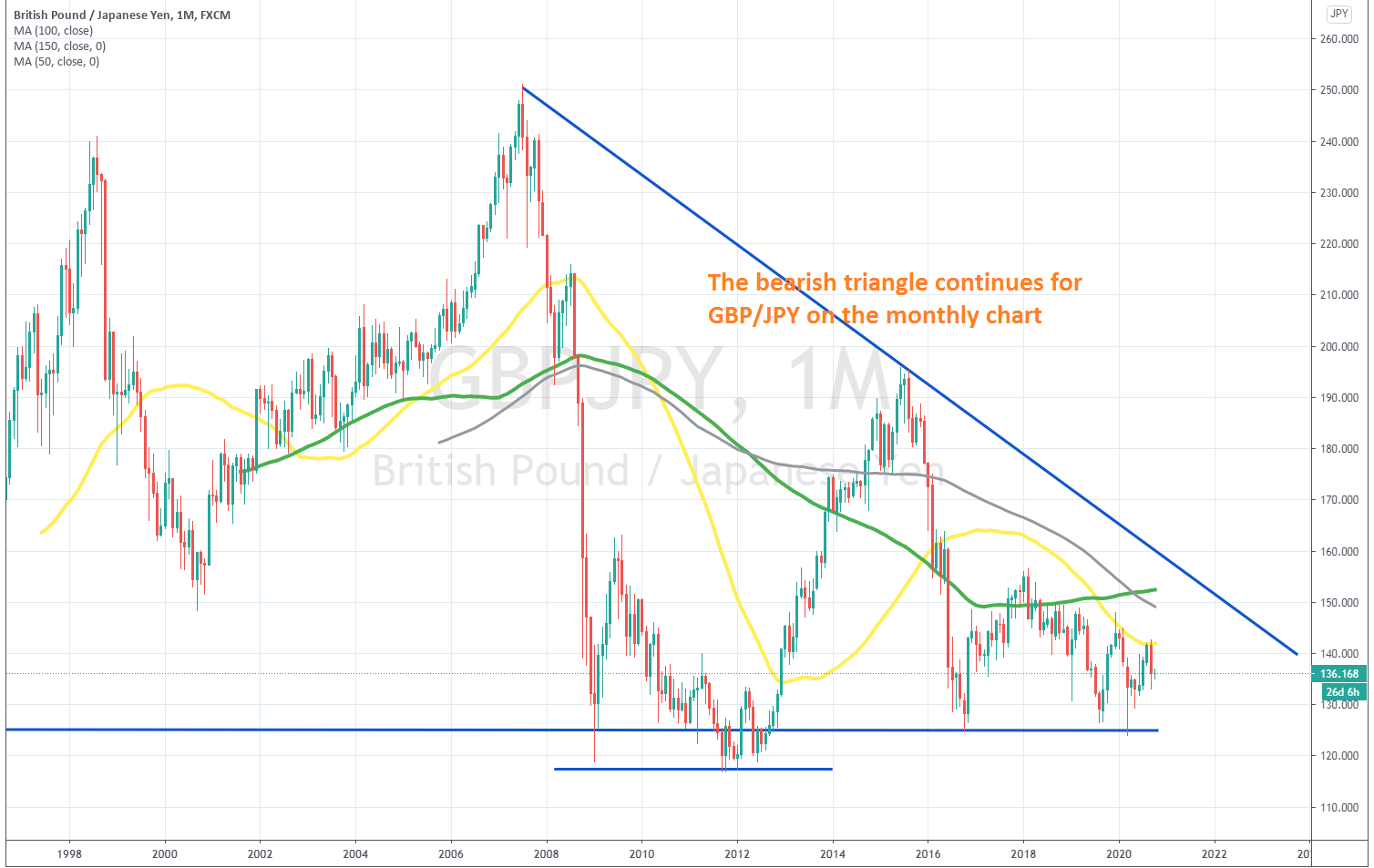 The pressure remains on the downside on the monthly chart

The GBP/JPY was bullish from the mid 1990s until July 2007, when the good times for this pair officially ended. Moving averages, which were providing support during the uptrend, were broken, and the 50 SMA (yellow) turned into resistance on the monthly chart. The price bounced off the 100 SMA (green) back then, but the 50 SMA stopped the bounce, and the global financial crisis sent this pair crashing nearly $ 1 lower, losing almost half its value. After the Greek debt crisis in 2011-12, we saw a decent pullback higher, but that ended in 2015, and the bearish trend resumed again. The downtrend continues for this pair, after the 50 SMA has rejected the price twice in the last two years, but the support zones around 125 and 117 still remain. 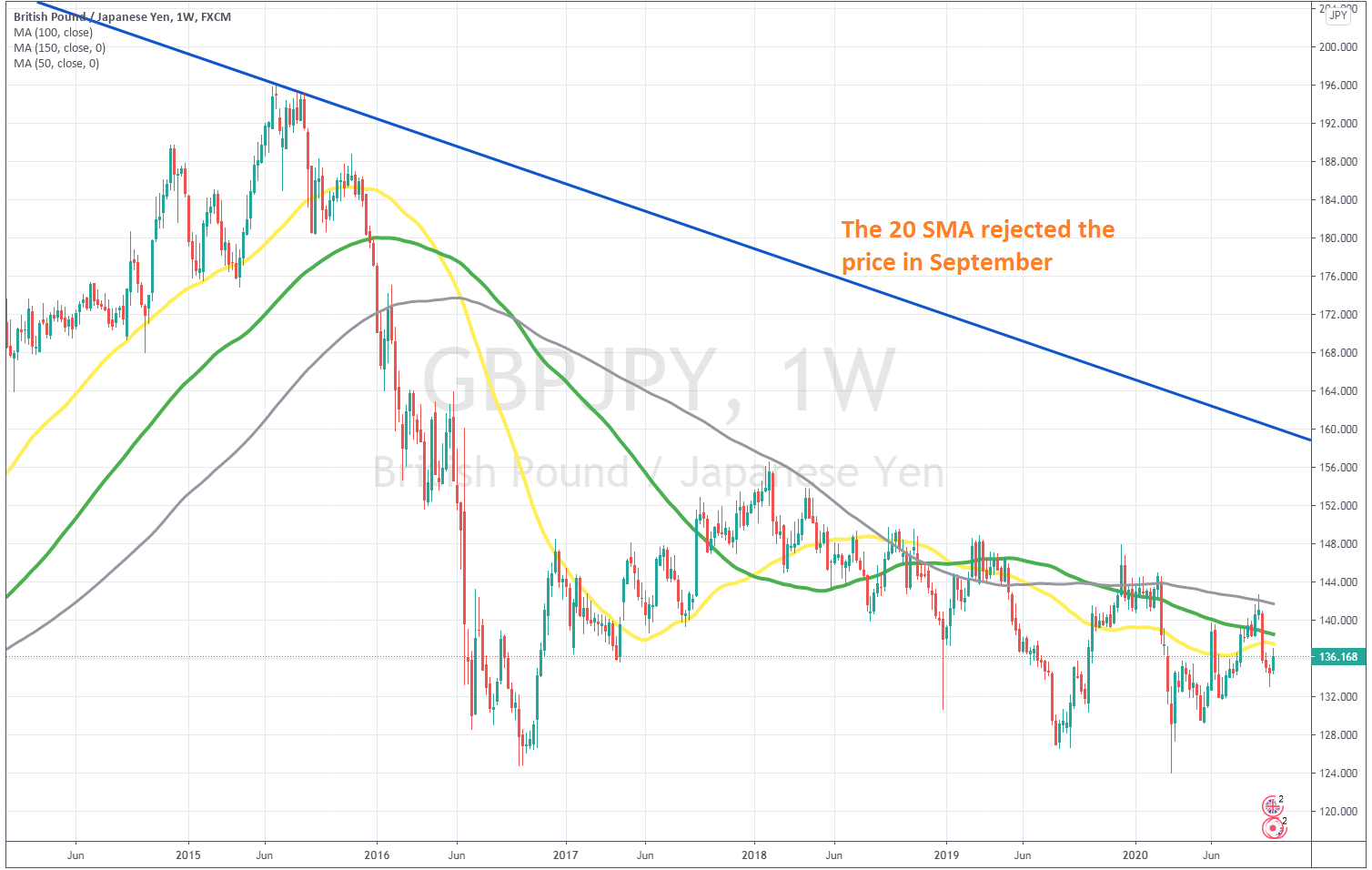 Will we see a retrace to the 100 smooth MA again?

On the weekly chart, the 50 SMA was providing support during the uptrend before 2007, but then the 50 SMA turned into resistance as the price crashed down. The pace of the downtrend has slowed, but the pressure remains on the downside, as highs keep getting lower on the weekly time-frame as well. Recently the 100 smooth moving average (gray) has turned into resistance for this pair, rejecting the price in the first week of September, after an upside-down hammer candlestick, which is a bearish reversing signal. The [[GBP/JPY]] turned lower again, losing nearly 10 cents, but in the last week of September, we saw a bullish signal, which is the hammer candlestick at the bottom, and last week, the price reversed back up. So, we are trying to see where this latest bullish retrace will take the GBP/JPY. If the 100 smooth MA provides resistance again, we might open a long term sell forex signal.