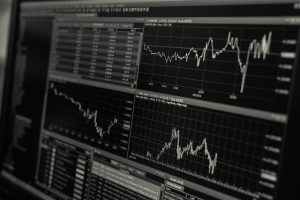 Forex Signals Brief for Jan 3: Will the Flash Crash Weigh Down Markets?

It has been a wild start to the day in forex markets, after what has been described as another flash crash. Full Article
1 yr
More News

The AUD/JPY pair is the abbreviated term used for the Australian dollar and Japanese Yen, nicknamed as "Aussie Yen". Before we get into the particulars, what exactly does AUD/JPY rate mean? The exchange rate tells you how many Canadian dollars (quote currency) are required to purchase one Australian dollar (base currency). For example, if the pair is trading at 0.95, it means it takes 0.95 Canadian Dollars to buy 1 Australian Dollar.

The Australian dollar is known as a commodity currency due to the role of Australia in global gold production and export. Aussie exhibits a long-term positive correlation with the value of gold.

Correlation is merely a mutual relationship or connection between two or more things.

Positive correlation – The positive relationship merely is when pairs move in tandem with each other.

In the forex world, the AUD/USD and AUD/CHF currency pairs are positively correlated. It's because all these pairs have an Australian dollar in the numerator. So, any change in the Aussie will be reflected in these pairs.

Gold & Aussie: One essential characteristic of the AUD is that it has a high positive correlation with gold prices. The reason behind this is that Australia is the third biggest gold producer in the world. As a result, whenever the price of gold rises or falls, the Aussie goes along for the ride. This will ultimately move the AUD/JPY pair in the same direction.

Crude Oil & Loonie: Typically, the price of crude oil has been highly correlated with the Loonie. Therefore, a rise in crude oil prices increases the value of the Canadian dollar and vice versa. The AUD/JPY shares a negative correlation with crude oil prices.

What Determines the AUD/JPY Exchange Rate?

Several factors can impact the AUD/JPY rate valuation, including:

RBA & BOC Monetary Policies: The Reserve Bank of Australia and the Bank of Canada control the supply of money in the market, to keep the economy on track. A dovish policy, which is also known as expansionary policy, from either of the central banks, weakens the related currency. In contrast, a hawkish monetary policy (contractionary policy) strengthens the currency.

Economic Events: The movement in the Canadian and Australian economic events determine the exchange rates. Top of the line economic events include GDP, Employment Change, Industrial Production, and Consumer Price Index. Better than forecast data increases the demand for related currency and impacts the value of either the Australian Dollar or the Canadian Dollar, causing fluctuations in the AUD/JPY exchange rate.

Gross Domestic Product – the Gross domestic product is the central measure of economic growth in the region.

Employment Change – Both of the currencies are sensitive to changes in employment, as slacks in the labor market cause a drop in Inflation rates.

Consumer Price Index – Since one of the goals of the RBA and RBNZ is to maintain price stability, they keep an eye on inflation indicators such as the CPI. If the annual CPI deviates from the central bank’s target, the RBA could make use of its monetary policy tools to keep inflation in check.

The balance of Trade – Australia and Canada have an extremely robust trade sector, so currency traders and bank officials alike tend to watch changes in the country’s export and import levels.

Political announcements & natural disasters – Besides the scheduled economic events, the political elections, new systems, wars, terrorist incidents, and natural calamities, etc. can all cause severe variations within the AUD/JPY.