Finally a break from this long, long week. The US presidential elections are finally over and things are much clearer now. Donald Trump won after a long and epic battle against almost every type of voter in the US. The whole political and media establishment was against him, but the US voters supported him and at the end of the day President-elect Trump will be the 45th leader of the US.

Trading forex was exhausting this week because there was so much action and volatility that it felt like it lasted a whole month. There was emotion involved as well because we were basically trading politics – which is never an easy task.

At some point in the first hours of Wednesday morning, it became clear that Trump was going to win and the Buck dove due to a short-lived wave of panic. That took us 400 pips down since we were going long on USD against the Euro and the Swiss Franc.

But the market quickly realized that this isn´t the end of the world and everything reversed in the next few hours. The forex signals that were deep in the red turned out to be quite profitable and we ended the week with a nice 195 pip profit.

Now, nearly a week later the whole picture seems a lot brighter and the market shifted from panic to excitement. The first signs show that Trump´s campaign rhetoric was, well, rhetoric. He has made some sensible comments since Wednesday. Seeing as Mexico won in a football match against the USA in the 2018 World Cup qualifiers on Saturday, so I guess the wall was stronger on the Mexican side. 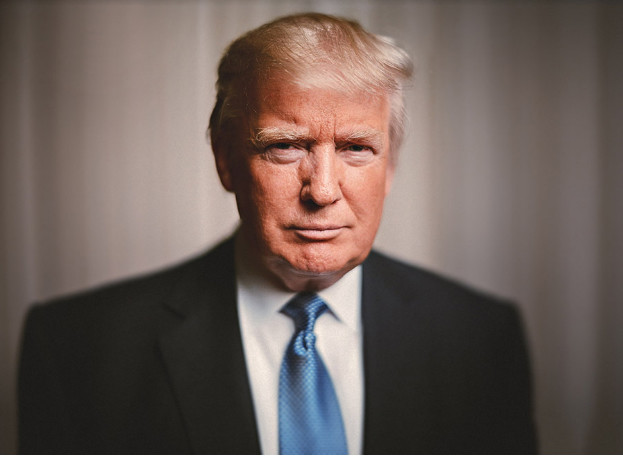 After last week´s drawdown, we vowed to fight hard this week in order to get back what the market snatched from us last week. But, judging from the price action and the volatility we saw last week in the forex market, we knew it wasn´t going to be easy (not that it ever is).

We thought that the best way to beat the market, especially during such volatile times, was to trade long-term, and we hadn´t opened long-term forex signals in a while, and so we decided to do so this week. The increased volatility took the price in major forex pairs to some important levels, which gave us a chance to open long-term forex signals.

Since the polls showed that Clinton advanced after the FBI closed investigations, almost everyone – including us – was convinced that Clinton would win.And this win would benefit the US Dollar. So, once EUR/USD got close to the 1.11 level we decided to take a chance and open a long-term forex signal in this forex pair.

We also opened a buy USD/CHF signal when this pair was around 0.9730; I think it was a day before the elections. I was expecting these two forex signals to bring us a few hundred pips.

The two long-term forex signals, on the other hand, ended up being in a 500 pip profit combined by the end of the week. But, the emotions and fear were too immense after the 200-300 pip USD decline when Trump was announced the winner. So we had to close the USD/CHF signal with a minimal profit while we let the other signal running, which brought us a 160 pip profit.

If you´re sticking to the original take profit target, then you must be sitting on a 500 pip profit with the potential to double it in the coming weeks. We opened 11 forex signals this week, 9 of which were closed in profit, so the win/loss ratio stands at 73:27.

I suppose everyone in this business knew this wasn´t going to be an easy week. It could have been a bit more straightforward if Clinton won, but the US elections are always a big event in forex so, even then, the volatility was going to be immense.

With Trump winning, the twists and turns become denser than Trump´s hair, but we have gotten used to these now. The politics are making a habit of intervening in forex now; only last week the turnaround in the Brexit process induced by the UK High Court provided a good lesson to everyone.

By the way, we´re not touching this forex pair at the moment because the market sentiment has changed tremendously, even though we said in one of our market updates that we would open a long-term signal around these levels. At least, not until Brexit gets back on track.

So, what happened in the forex market this week as the US presidential elections went from one stage to the next?

The market was very confident in the first two days; Clinton´s email case was closed the previous Friday and she was widening the gap with Trump in the polls. On Monday morning, the USD pairs opened with a 100 gap higher, particularly against the safe haven currencies of Yen and CHF and this advanced until Friday evening.

Then, Tuesday night or Wednesday morning, which depends where you live, was the time the big turnaround happened. Clinton was in front in Florida which is a very important state it´s the main swing state, but Trump took it at the end of the day.

But the final blow for Clinton came from Pennsylvania and Ohio. Trump won these last two swing states and the polls (once again) proved to be rubbish. This is the third major occasion the polls failed miserably; the first time was when the Tories won the elections in the UK a couple of years ago (or was it last year?), the second time was obviously Brexit – and now the US elections.

I think it´s time to change the way the polls are formulated and promoted, or scrap them altogether.  The political scene is already changing. The people are voting against conventional politics. I have been wondering for two decades how could people put up with traditional politics which have brought nothing but politically correct rhetoric, while more than a dozen of important aspects of everyday life kept getting worse.

If you have ever lived in the UK or the US you know what I am talking about. The prices have been surging in the last 20 years while the real income has shrunk, the level of immigration has been astonishing, the divergences have widened, the threat of terrorism has increased, etc. These are only a few issues that traditional politics failed to even acknowledge, let alone tackle them. Ignoring the people brings far right/left winds in power.

Anyway, the market panicked after Trump won the elections and the USD lost 200-300 pips, but a few hours later the forex market came back to its senses. Sure Trump´s rhetoric was unconventional, but the US system is strong enough to balance forces. When it comes to the economy, Trump´s programme has an advantage, at least in the short term. Republicans won the house and senate… so his fiscal plan has no obstacles in its path.

That´s one of the main reasons the USD is feeling confident, apart from tighter monetary policy from the FED. But, the central banks across the globe are not taking the new US president with an open mind, as Clinton suggested in her conceding speech. The RBNZ (Royal Bank of New Zealand) cut the interest rates the following day, but with a strengthening USD, I don´t think other central banks will follow them.

This is the second week the forex market doesn´t give a care for the economic data, but as we said last week, it will soon catch up with is, so let´s see what else was on the economic calendar this week apart from US elections.

Looking at the numbers from the UK, it seems like the Brexit vote effect on the UK economy is behind us. The UK manufacturing production beat the expectations, jumping up by 0.6%. The housing sector continues its boom as house prices showed a 23% surge, but the Q3 GDP missed the expectations by 0.1%.

We have seen a positive trend in Europe in the recent months but this week the numbers from the continent came out below consensus, which I hope is just a glitch. The import/export numbers showed a 1.2% decline in the economic activity, with the rest of the world and the trade balance missed expectations as well. Inflation, on the other hand, remained stable. In the US, the only other thing to notice this week besides the elections was the jump in consumer sentiment, from 87.2% to 91.6%.

The hourly chart below shows the mindset of the market after the US elections; initially the US lost about 300 pips (EUR/USD 300 pips higher), which is displayed in the EUR/USD chart below, but after the first four hours the panic wears off and down goes this forex pair. The technical indicators can´t change the market sentiment, but they can signal some good trading opportunities. You can´t get a clearer signal than the doji at the top of this move. The doji candlestick is a turnaround signal. Another indicator was the 200 smooth moving average (200 SMA) on the daily forex chart. The price reversed once it reached the 200 SMA, which has been pushing this pair down for months. The stochastic and RSI indicators are already oversold here, but the fundamental analysis doesn´t fall in line with technical analysis here, so we´re staying out of it for the time being. 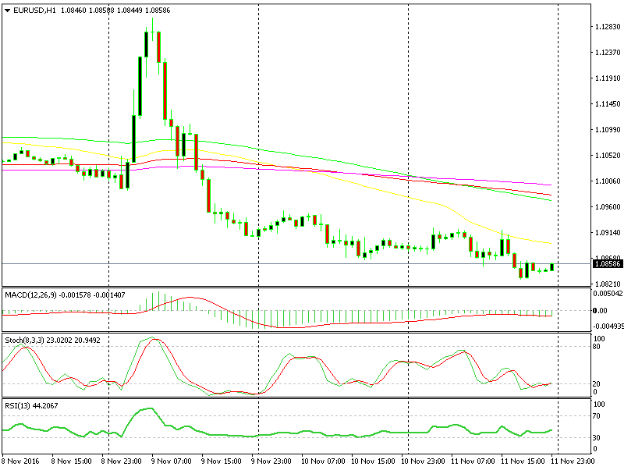 A doji formed before the big reverse took place 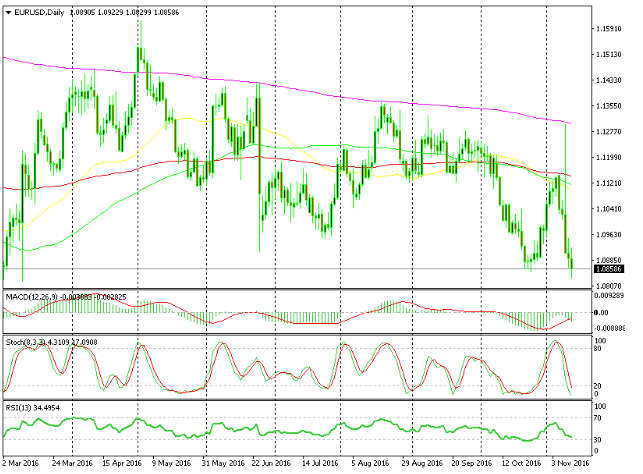 Once again, the 200 SMA slapped the price nearly 500 pips lower

Looking at the weekly USD/JPY chart below, we can see a very bullish candlestick. This forex pair had its weak moment after the Trump vote, but it quickly reversed and it closed the week just below the 100 SMA in red. The same MA is providing resistance on the daily chart, which casts a doubt on the upside. The monthly candlestick seems very bullish as well but the moving averages are providing resistance here, too. The 50 and 200 SMAs stand right above the closing price, but the other two indicators on the bottom of the chart here are oversold and pointing up, which signal a continuation of this upward move. 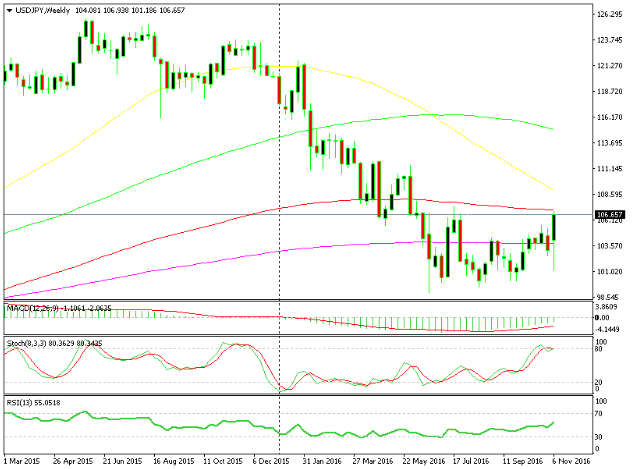 The 100 SMA is the first obstacle for the bulls 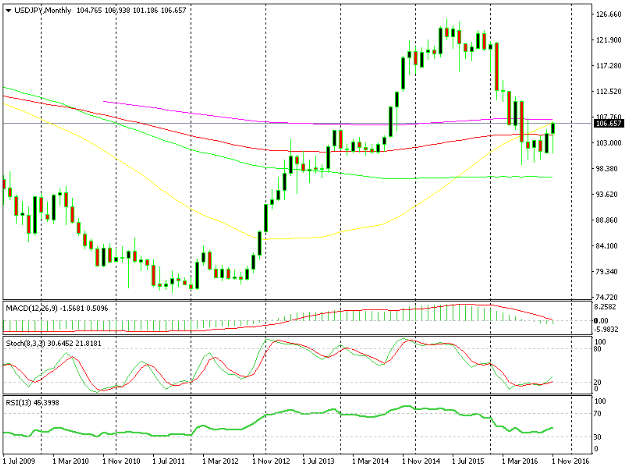 RSI and Stochastic indicators are pointing up

Ok, so we made it through this extraordinary week. People voted Trump as the new president of America, so the far right are advancing in the UK and the US, while Southern Europe (Italy, Greece) is leaning towards the far left. Now it´s quite clear that the people are sick and tired of conventional politics.

We made it through safe and made a handful of pips as well. A 195 pip profit is nearly double the amount we lost last week so we´re on the right track to end the month with some good profit. That said, the market is still in election mode, which can take the price from side-to-side on the coming days, and we´ll be careful next week to avoid unnecessary losses.