EUR/GBP – Is This the Perfect Trade Setup? - Forex News by FX Leaders

EUR/GBP – Is This the Perfect Trade Setup?

So the Euro made a comeback as the forex charts show this morning. In my opinion, this jump will be short lived and the first signs of it are already appearing.

We opened an EUR/USD sell forex signal earlier this morning when the price in this forex pair was around 1.0810 because it seemed like this rally was running out of steam. I guess forex traders already closed some of the short trades from higher up, hence the jump, so the position adjustment was over and, according to textbooks, the downtrend would ideally resume again.

That forex signal went according to plan, but another trading opportunity appeared in EUR/GBP. These sorts of moves come unexpectedly and they are very dangerous if you get caught in between. However, they also present us with some good trading opportunities, such as the first signal in EUR/USD and now in EUR/GBP. 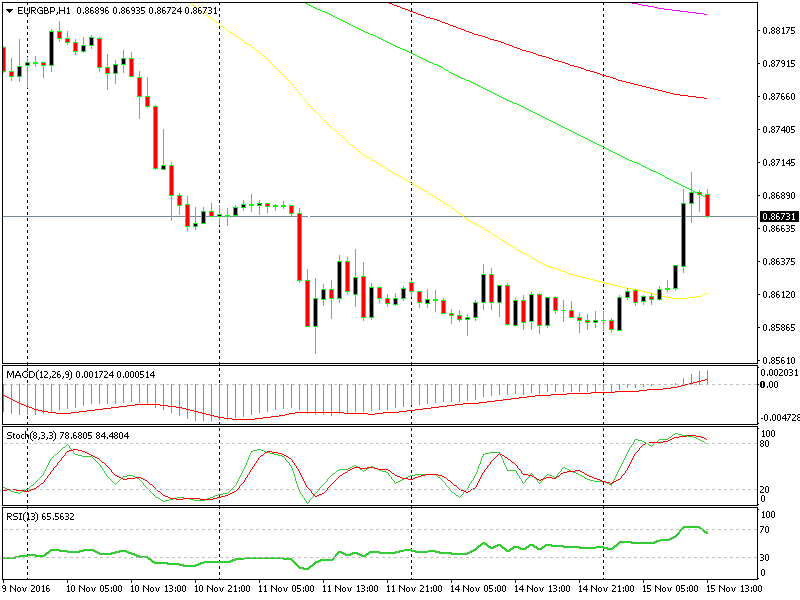 The EUR/GBP chart formed an ideal pattern. If you look at the H1 forex chart above you can see that the stochastic and RSI indicators were severely oversold. The price was just below the 100 simple moving average (100 SMA) in green which is another indicator signaling a possible reverse.

That makes it two indicators pointing down. The other bearish signal was the failure to break above this moving average and with the price eventually closing below it at the end of the hour. This means that the sellers are crowded up here around 0.8710-15. The candlestick that pierced the 100 SMA but closed below it is yet another sell signal because it looks like a morning star which also indicates a possible reverse.

Ok, I´ve lost count how many sell signals we got here, but that´s more to come. If you switch to the H4 EUR/USD chart you can see that stochastic is almost oversold here as well and the 200 smooth moving average in pink was waiting just above the wing high. 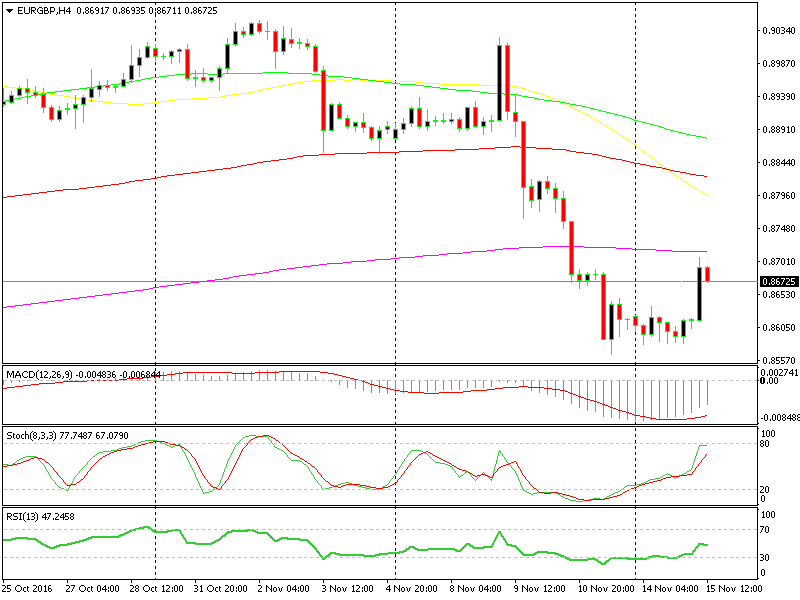 All of these signals were more than enough to consider this the perfect technical trade setup. Adding the bearish sentiment in the Euro pairs than this trade was as good as money in the pocket. Of course, you can never be 100% certain in forex, but with two moving averages protecting the top side, any attempts to climb higher would be limited.

Well, a couple of hours after we opened the EUR/GBP signal, the price reversed and hit our take profit target. That´s the third winning forex signal today if we include the NZD/USD signal we opened last night.

Other forex traders might use different indicators and diverse trading strategy but according to my strategy, this was the perfect setup. Plenty of technical indicators screaming sell and the fundamental picture was/is very bearish too. What more do we need to open a forex trade?