We all remember the market crash that the SNB (Swiss National Bank) caused in January last year. Some forex traders remember it as an interesting and fun event, while others remember it as a nightmare. Most forex brokers don´t even want to remember it due to huge losses they faced during that event.

The SNB removed the 1.20 peg they had placed in this forex pair since September 2011 and that´s one of the reasons that tragedy happened. But to me, the flash crash happened because the traders got too relaxed. Most forex traders, including myself, bought EUR/CHF every time the price got close to the 1.20 level with the idea that the SNB had our backs covered.

We never knew exactly when the SNB would intervene but we knew that they would protect the 1.20 level. It might take days, weeks, or months before the SNB acted, but it was almost sure they would do so sooner or later. That was a “buy and forget” case. I would open a buy signal close to 1.20 and let it hang around there for weeks until the SNB delivered the bonus.

But we must never get too relaxed when we trade forex. Nothing is 100% certain in forex and no trade is totally safe; risk is always present. That´s why we must not get too relaxed in EUR/USD shorts right now.

It is obvious that the fundamentals clearly weigh on the USD side at the moment, but that might not last as long as you think. With Trump becoming president, the USD has another strong fundamental reason to gain against most major currencies.

That said, everything might change in a heartbeat. I have this feeling that when that happens, we will see a violent reverse of the long term EUR/USD downtrend. Where does this feeling come from, you might ask.

First of all, the Trump move in USD will be short lived (a few months at most). The market got excited that US elections and all the uncertainties they bring are over. That´s only temporary, though. Once the excitement is over, we´ll get back right where we were beforehand. The Republicans won all there was at stake, which is another reason for this USD surge since the elections, but again, even if they undertake the best policies ever for the US economy, it will take a decade to see the effects, so this excitement will wear out pretty soon, too. 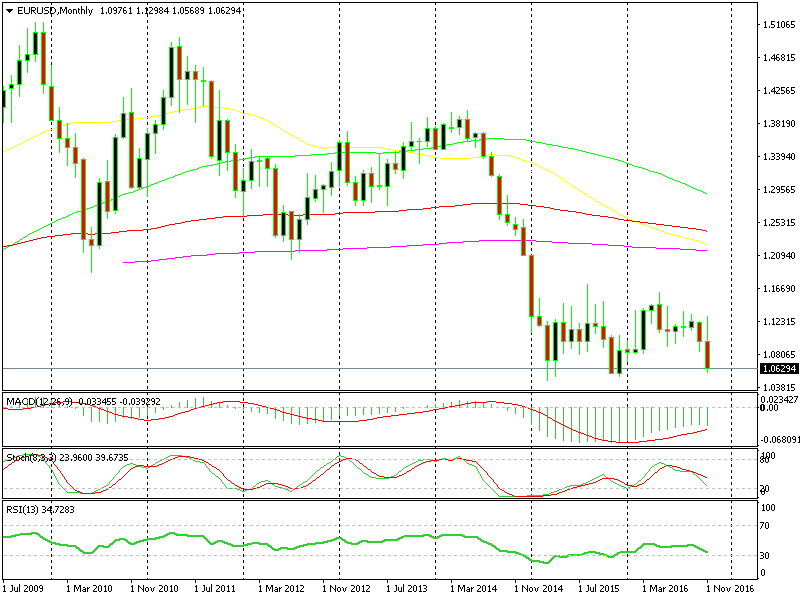 The monthly chart setup seems bearish, but if by the time it turns bullish it will be too late to get out of shorts

The December FED hike, which is another factor for the recent USD strength, will happen in about a month. After that, the market will quickly focus on the next rate hike. That´s how fast the market attention shifts. However, I don´t think the FED will attach a hawkish statement to the rate hike. I think they will point to just one rate hike in 2017, two at best. This won´t satisfy the market, so in my opinion, after rallying for a few trading sessions following the interest rate hike, EUR/USD will reverse, at least in the short term.

These are the reasons coming from the USD side of the trade and they are not really that positive for the Buck in the mid/long term.

Now, when we look at this forex pair from the Euro angle, things get even exciting for EUR/USD bulls. If (and this is a big if) the ECB signals in December a possible tapering process for their QE (quantitative easing) programme, then that is going to be the turning point.

The forex market has been so reluctant to push this forex pair down, despite the huge divergences in the US and EU inflation numbers and economy, as well as the divergent monetary policy between the FED and the ECB; the FED has been tightening the policy while the ECB has been loosening it, yet EUR/USD has been hanging around 1.05 and 1.15 for nearly two years.

Imagine what will happen if the ECB decides to tighten. I´m sure the Euro will get back at the USD for at least 10-15 cents in the first few weeks. The economic situation has started to improve in the Eurozone and the inflation is picking up, so expect the monetary policy to follow suit.

That´s why we must not get too relaxed with our EUR/USD shorts. There´s some more time until that happens, at least one month and EUR/USD might even reach parity during this time, but we must be prepared for the big turnaround.

These turnarounds take place when one currency seems as if it will fall apart and that´s where the Euro is right now. The forex market tends to anticipate the events and exhaust most of the move before they even happen.

So guys, if you are selling EUR/USD now, which seems reasonable, don´t get too sucked in. This is not one of those “sell/buy and forget cases”.

Can EUR/USD Fall Back to Parity After Failing at 1.05?
21 hours ago

Forex Signals Brief for November 28: Eurozone Inflation and US ISM Manufacturing
2 days ago