Yesterday, we opened a buy AUD/USD signal. We did that just as the USD was getting some heavy bids after the great US durable goods orders. Some forex traders might have considered it as a premature trade because the positive US economic numbers were released only an hour earlier and the market sentiment was extremely bullish towards the Buck.

But I still saw some signs of life in the Aussie, so I thought that a buy forex signal in this pair would sooner or later result in some good profit. I mean, nothing is certain in forex, but looking at these signs made me think that buying the AUD against the USD has much higher probabilities going the right way, compared to other major forex currencies. 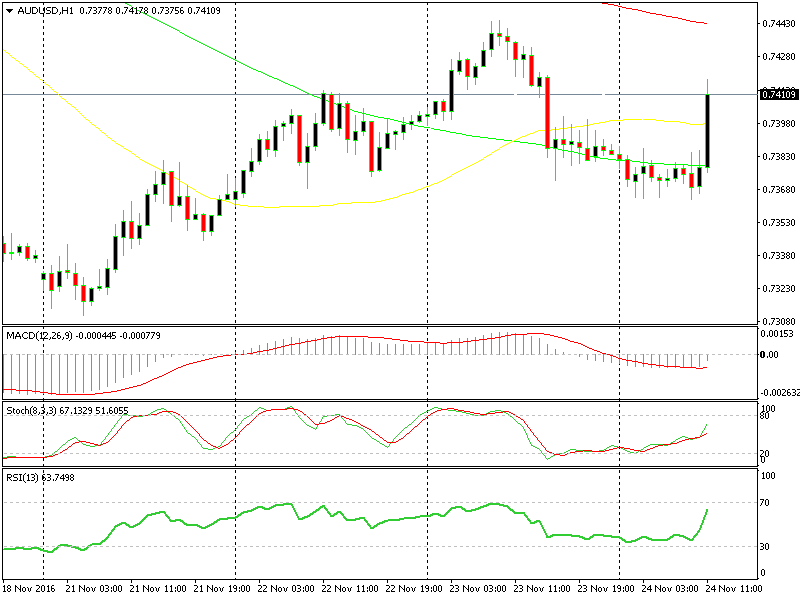 We finally got our pips

The first buy signal was technical; the price in this forex pair lost about 30-40 pips after the US goods orders were released and the price reached the 100 SMA in green. That moving average was bound to provide some sort of support.

The next sign which signaled a buy opportunity was the uptrend in AUD/USD in the previous three days, since Monday. While other major forex pairs were in a downtrend with the USD having the upper hand, AUD/USD was going against the flock. That meant that there was some kind of demand for the Aussie.

The third signal screaming "buy" was the amount of decline after the US data release. EUR/USD lost about 100 pips during that forex event while USD/JPY lost about 200 pips. That´s a huge decline compared to the 30-40 pips that the Aussie lost to the Buck.

These three signals pointed to one thing only: the market had a positive attitude towards the Aussie and once the USD rally ended, AUD/USD would be the first forex pair to jump higher. As you can see from the AUD/USD chart, the 50 pip jump in the last hour was the biggest gain against the USD in all major pairs.

The buyers who were holding this pair up yesterday took the price 50 pips higher as soon as the USD bulls went through a moment of weakness. So, that was the idea behind our AUD/USD trade. It wasn´t a perfect setup, but life isn´t perfect. We calculated the odds for and against us and we executed the trade. That´s how forex traders roll.

Gold Breaks Above the 200 Daily SMA, As It Pushes to $1,800
1 day ago
AUD/USD Facing A Big Test at the 20 Weekly SMA
AUD/USD has been bullish since early October although buyers are having trouble pushing the price above the 200 weekly SMA
4 days ago