All the Questions Were Answered in November – November 2016 Monthly Review

A lot has happened during this month with many things changed, and November of 2016 will be remembered as the month that changed the world. We got used to living in a liberal world for decades but that tide is shifting.

At first, the Brexit vote raised some eyebrows and although it might have an impact on the Europe, its main impact was felt in Great Britain. But with Donald Trump´s US election victory, the world as we know it might come to an end. It won´t fall apart, but instead of more global integration, we are likely to experience reverse integration, disintegration – and especially in terms of trade and economy.

Before the US elections, the market expected Clinton to win easily, but the biggest miscalculation was to believe that the Buck would crash in the case Trump won. As we know, Trump won against all odds and against literally everyone. Republicans took the Senate, the Lower House too, but the Buck didn´t drop dead. Instead, after an initial few hours of shock, the USD found its feet and hasn´t stopped since then.

So, Americans followed in the footsteps of their cousins across the pond, towards a less liberal path. But in the meantime, the other half of the public in the UK is fighting back. The UK High Court ruled out triggering of the Article 50 by the UK government, which brings Brexit back to parliament, but not before it goes through the Supreme Court.

We had yet another successful month regarding forex signals, as we made 367 pips in November. You´d think that a forex trader would have the easiest time before the elections and after the election trading wore off, but that´s exactly when we had the toughest time this month, while during the elections we performed pretty well.

Yep, I almost forgot. The OPEC cartel finally reached a deal this month to cut oil production. Yet, they never stick to their promises, so we´ll see if they will keep their word this time. 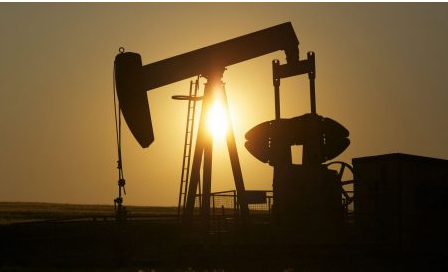 There are two reasons for oil to rally, the OPEC deal and a triumphant Trump

Most of November has been pretty straightforward for us here at FXML and I hope for most of you guys out there. The market has jumped on the USD train and everything was as easy as one, two, three. Wait for pullbacks on the USD, buy it against major currencies and rinse and repeat.

But November wasn´t all easy peas for us. The first and the last weeks were sort of confusing for forex traders since the price action was very choppy. In the first week, it was the reopening of Clinton´s email case by FBI which sent the forex market berzerk as Trump narrowed the gap in the polls. Then, in the last week, it was time for USD buyers to take profit after the rally which was worth at least half a dozen cents since the US elections.

So, we suffered a drawdown during the first and last week of the month, but most of it was pretty simple for us, as we mentioned above. We tried to play the game with long-term signals in the first half of October. With the (wrong) assumption that Clinton would win as the polls indicated, we and all the forex market made another wrong assumption that the Buck would rally. So, we opened two long-term forex signals in favour of the USD.

Well, the USD got hammered in the first couple of hours. Luckily, the market reconsidered Trump´s win and the USD reversed before reaching SL for our two signals. We closed the USD/CHF signal around the breakeven level, while we got about 160 pips from the EUR/USD signal.

Still, most of our profit came from short=term forex signals this month, particularly EUR/USD. The strategy was to wait until this forex pair broke a decent support level, wait for the price to come back to it as a normal retrace and then sell when the moving averages caught up with it or when signs of weakness appeared.

The result was successful and we closed the month with a 167 pip profit. We opened 60 forex signals this month, 17 of which hit SL while the rest were closed in profit. That gives us a 72:28 win/loss ratio.

In October, the central banks had the final saying in the forex market, but November was going to be all about politics anyway. So, it wasn´t such a big surprise when the economic data and central banks got totally ignored by the market.

The first week concerned Clinton´s email case, which was reopened by the FBI. The Buck suffered some considerable losses but, by the end of the week, the FBI called it a day and closed the investigation, which sent the USD higher again.

In the last two days leading to the US presidential election Secretary Clinton advanced further in the polls and so did the Buck, which for us is the forex market. Clinton´s presidency would mean a status quo of the current political and economic path, which means the future would be without big surprises. The market doesn´t like uncertainties, so that´s the reason the USD found some bids in the last few days.

Little did we know that the US voter had already made their mind up and Trump would win in a historical victory. The Buck tumbled for a few cents as Trump´s win came as a shock, but the market quickly understood it had made a wrong assumption in this case.

After the initial shock was over and the Republicans cleared the table, the situation became much clearer. Trump´s fiscal plan became very real all of a sudden and the world turned out to be a better place. The USD started an uptrend while commodity currencies, with the Yen in particular, got hammered. The USD strength continued during the entire month with only minor bumps in the road.

Elsewhere in the world, the liberal side of the UK public won the first battle in the UK legal system when the UK High Court gave the verdict that the UK government can´t trigger Article 50 on their own; instead, it has to go through parliament first. The funniest event of the month though were notes from Mark Field´s chief of staff who was waving them around while the media took a picture of a phrase coming from the UK Brexit ministry. “Have cake, eat it” was the phrase, which means milk the EU and the single market while giving nothing back in return. We´ll see how far that goes.

That was not all, though, OPEC finally reached the promised deal to cut oil production and non-OPEC producers seem to be willing to join the deal, but how often have they complied with the rules? The answer is only about 15%. On top of that, they booted off the cartel Indonesia as well and will share its OPEC quotas among them, which makes this deal almost invalid, still oil is feeling better off a tad. 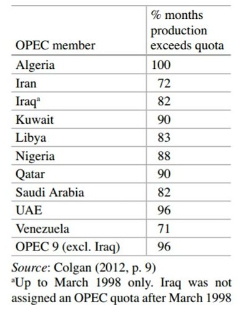 Can OPEC even trust themselves?

We have mentioned many times in our weekly analysis, the market was focused on politics this month, so the economic data was almost completely ignored. Still, there were a few economic releases which moved the forex market in November and this will set the tone for December.

The more distinguishing thing this month was the improvement in the Eurozone economic data. Most of the manufacturing and services numbers beat the expectations and from the look of it, the EU economy seems set to enter the next recovery phase, although this process is still a few years behind the US and UK counterparts. The EU unemployment rate declined 2 points as well in November, yet at 9.8% unemployment is still a long way from the 5% natural level.

The economic data from the UK was relatively upbeat too – considering the Brexit process. There are still some obvious weaknesses, though, which I hope dissipate in the next few months. However, with Brexit accelerating and the increasing uncertainty it will bring I´m afraid the UK economy will take the other direction.

The US economic data also showed some resilience in the economy this month as the global investor sentiment improved, particularly after Trump´s win. The unemployment claims remained steady and low, while the retail sales surged and the US unemployment rate falling to 4.6%. Yet, the wages which the market now uses as the primary indicator of the US economy, have been pretty volatile. It remains to be seen whether lower unemployment will drive wages and salaries higher.

GBP/USD has been in a long-term downtrend since summer last year, but right now this forex pair is in a middle of a pullback. As you can see from the weekly GBP/USD chart below, this is the third period of consolidation/pullback this year and the technical indicators are getting closer to overbought levels. 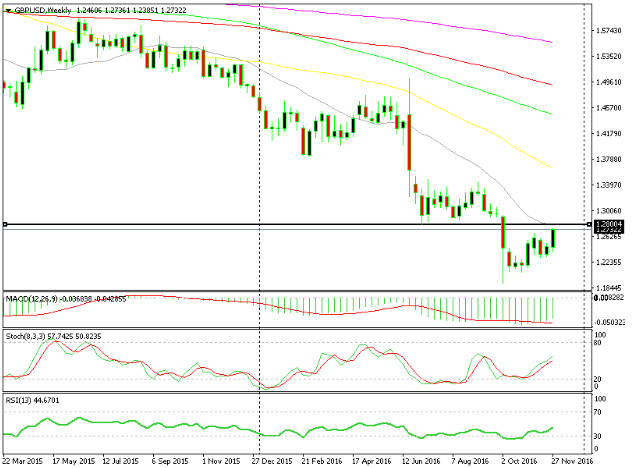 I have often said in the daily market updates, 1.2800 is likely to be a strong resistance level which might be the end of this retrace and stars are lining up for that. It used to be a solid support level, which once broken will likely turn into resistance. Besides that, the gray 20 simple moving average (20 SMA) on the weekly forex chart is hanging just there and so is the green 100 SMA on the daily chart.

On the daily chart, the stochastic and RSI indicators are already overbought, yet the forex market likes to push things around a bit to hunt out weak stops. So, guys, the price might even pierce the 1.28 resistance level and perhaps reach 1.2850, 1.29 or even 1.30 based purely on technicals and market sentiment, leaving Brexit completely out of it, but 1.28 is the level to watch. If the Brexit process gets in the way again, which is likely to, then out of the window goes the technical analysis, so be always aware. 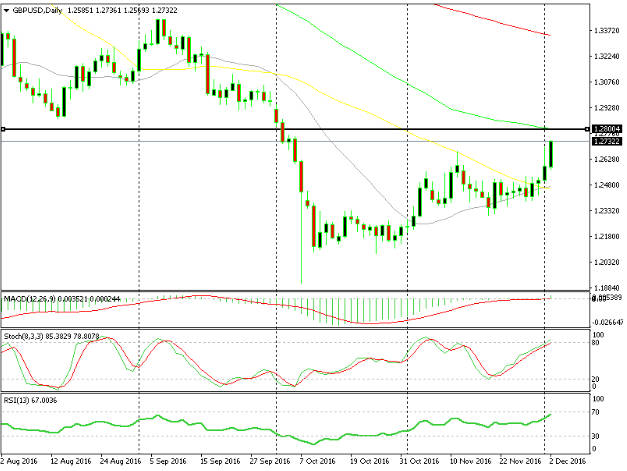 Stochastic and RSI are already overbought

The US presidential elections and the OPEC meeting took place this month, so we experienced some crazy and volatile times, but we still managed to close it successfully.

The world seems somewhat different now and change is coming indeed, but it´s still unclear whether these changes will be positive or negative for the global economy. The one thing which is certain is the improved global business sentiment. The Italian constitutional referendum is happening as I write, so this will be the next risk event for the Euro. We´ll be back with you tomorrow, though, to cover this event and see whether the Eurozone will head towards a breakup.