Another EUR/CHF Signal … Or Two - Forex News by FX Leaders

Another EUR/CHF Signal … Or Two

Every forex trader knows that EUR/CHF is one of the slowest pairs ever. Still, it offers us some good trading opportunities from time to time, especially close to support/resistance levels which are few and far in between.

We have had a few short term forex signals a couple of weeks ago when the price was around these levels, as well as a long term signal, but as the price moved above 1.08 during the Euro reverse after the Italian referendum, trading opportunities became scarce. Now, the price is back down at the 1.07 level.

Since the ECB announced an extension of the QE programme about 10 days ago, this forex pair entered a downtrend breaking support after support. This decline has brought into light some trading setups though, which are pretty tempting to me. 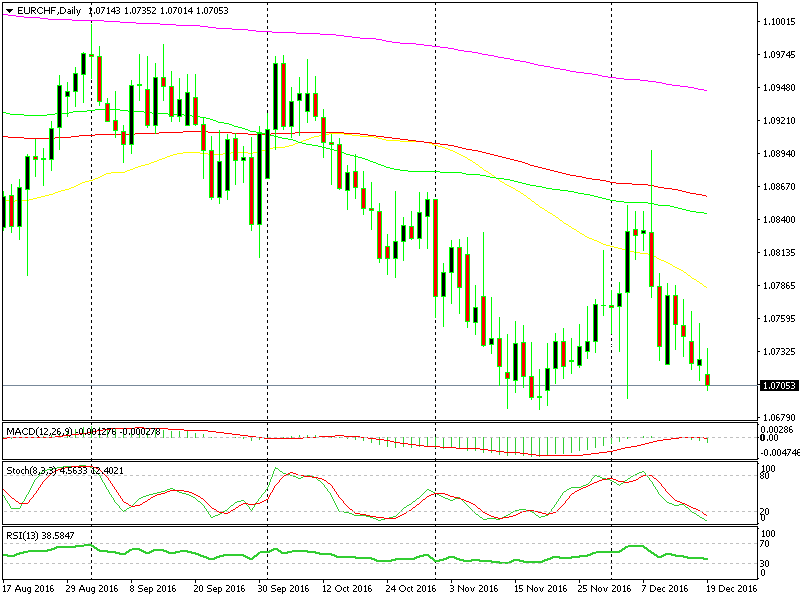 As you can see from the EUR/CHF daily chart, this forex pair is oversold since the stochastic indicator is well oversold, while the RSI indicator has just touched the oversold area. That's a bullish signal, but the strongest buy signal is the level itself.

The SNB (Swiss National Bank) has been buying dips in this forex pair around here and my instinct tells me that they won't let the sellers give them another kick, like the one we saw in January last year which shook the forex industry. The area between 1.0680 and 1.0720 is the buying zone for the SNB, but I haven't noticed any such thing just yet. Maybe they will get active when London closes and the liquidity drops in order to have the biggest impact on the forex market.

We have opened a long term buy EUR/CHF signal about a week ago and today we opened another two short term forex signals around here. Every timeframe chart up to weekly is heavily oversold, so we hope that a reverse takes place soon. The odds are in our favour but we must wait for the SNB. Patience often pays off in forex.

Before I forget, the IMF chairwoman Christine Lagarde has been found giÃºilty today of negligence when she was the finance minister of France, but she´s not getting sentenced. Does anyone in the leading elite ever go to prison?

Forex Signals Brief for September 28: More FED Speakers and US Data to Keep the USD Up
14 hours ago