We started the new year this week and, as usual, the market was sort of unsettled. We had two weeks of very thin liquidity, but the forex market hasn’t returned back to normality (just yet).

I thought the market stabilized for the new year when the USD resumed it´s late 2016 uptrend in the first two days of the week. But, that was just a mirage as everything reversed in the following days, despite the great US economic data this week. This has been running hot for months now.

Speaking of the economic numbers, besides the German factory orders and retail sales, I didn´t see another piece of data this week which took me by surprise. That strengthens the view that the global economy has finally settled on the right track and is moving along just fine.

Some might ask for more, but coming from a decade of economic shocks you must keep your feet on the ground. We suffered a drawback from our forex signals this week, which isn´t a great start but we are in the green with our EUR/USD long-term signal – and I´m sure that at the end of the month we will end up in green. 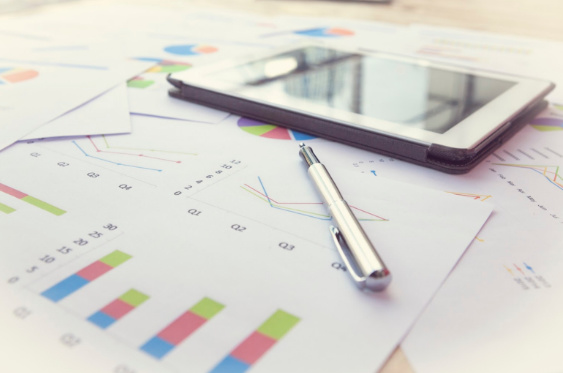 2017 is here, do you have your trading plan ready?

Same as the last few weeks of the previous year, the first week of the year is usually irrational. Forex traders are unsure how to position themselves and liquidity is still at abnormal levels.

This week, forex traders didn’t make up their minds regarding which direction to take, so the market swung from one extreme to another without any reason. In fact, the forex market went against the logic for the better part of this week, and it caught us on the wrong foot quite a few times.

EUR/USD was the worst pair to trade this week. After the EUR/USD downtrend resumed early in the week and the support “gave up”, we opened a few sell signals here during the retrace with the idea that the trend would continue, especially after two weeks of trading water.

But that wasn’t meant to be, since this forex pair reversed all of a sudden and ended up about 300 pips higher. We grabbed some pips when it topped above 1.06 on Friday but we still closed the week in the red.

That said, we have been trading with some restrictions/disadvantages this week since we had a technical glitch with some of the forex pairs, particularly EUR/CHF. Our open EUR/CHF signal hasn´t closed yet because of that glitch, but the price has crossed over it several times.

The 1.07 level in this pair has been a huge support area, as we have mentioned countless times before, and the price has dipped there at least four times this week. I have never hesitated opening buy signals down there, so we would have had at least for winning signals from this pair this week worth 100 pips if it wasn´t for that glitch, so we had to close the week with – 82 pips in our forex account.

We did open a long-term EUR/USD signal on Friday, which we have been talking about quite a lot recently. It was well in the money as of Friday close and we´re still eyeing USD/JPY if we can get a better entry price.

As far as the first week goes, I can say that the forex market is still in a limbo state. It looked as if the market got back to its senses as soon as the trading started. The 300 pips jump in EUR/USD over the holidays was undone in just two days and the 1.0350 level finally let go. So, back on the USD train… right?

Well, not quite as the reverse happened just as quickly. This pair reclaimed that level in no time and in no time it found itself 300 pips higher.

In normal times, this sort of price action would clearly indicate a trend reversal. A quick dip to trigger the weak stops, followed by a swift reversal can mean only one thing, the sellers have disappeared and the buyers are now in charge.

But this is only the first week of the year and as we mentioned previously, liquidity is still thin and forex traders haven’t made their mind up yet. Besides that, not everyone is back from the holidays yet, so we´ll have to wait until next week in order to see if this is really a trend reversal or just traders making some pocket money as the Buck jumps up and down.

To me, this is not a trend reversal since all fundamentals point to further USD gains. But, don´t underestimate the market sentiment. Fundamentals were immensely in favour of the USD a year ago comparing to JPY and CAD, yet, these two currencies gained more than 25 cents against the Buck during a period of several months.

We see that happen pretty often in this business, that´s why we must never be too confident when trading forex. “The market can remain irrational longer than you can stay liquid” is one of the most well-known phrases in forex, which we must always remember it well. Actually, a colleague of mine keeps some of the most important forex phrases printed on his morning coffee mug, and I’ve always found that quite handy.

This has been another great week regarding the economic figures from all over the globe… it’s  becoming a trend. The only caveats were the German factory orders and retail sales, but the German economy is in a relatively good place and German producers wouldn’t mind a month of contraction.

It kicked off with the Eurozone manufacturing production numbers exceeding expectations on Monday. On Tuesday we received the Chinese, British, and the US manufacturing figures as well as the US construction spending, all of which shocked the market again, particularly the UK numbers.

On Wednesday, the good data from Europe and the UK kept rolling as the UK construction PMI and net lending to individuals grew considerably from the previous month, while the Spanish unemployment declined by 87k. The most important release that day, though, was the EU inflation report which showed further improvement, thus making the Germans jump off their seats.

Thursday was the day of the UK and US service sectors which, again, left me impressed. However, I was focused on Friday´s data. The US average earnings (wages/salaries) are the most important economic data for the FED now (alongside inflation), so a 0.4% jump month-on-month is great news. The Buck benefited from it, but not as much as it would have done a few weeks ago.

We have looked at this pair quite a few times recently, but I think that we must look at it again since it is now about 100 pips lower from the last time we did so on Friday.

As you can see on the H4 EUR/USD chart, the price is heading down gradually, with still some room to go until the green 100 moving average (100 SMA) in green, which has provided support and resistance before. 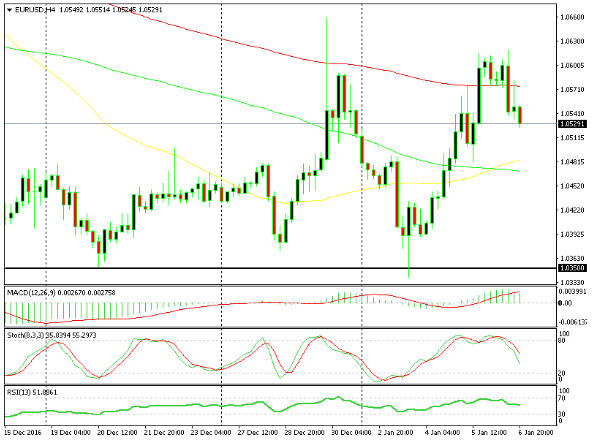 That space is worth about 100 pips, which means that our forex signal here would be roughly 150 pips in profit. That would be a good place to consider as the first take profit target.

If we switch to the daily forex chart, the picture seems a bit brighter now for EUR/USD sellers. It looked bleak until Friday afternoon, but the jump in US wages has sent this pair about 100 pips lower and has thrown the sellers a lifeline. 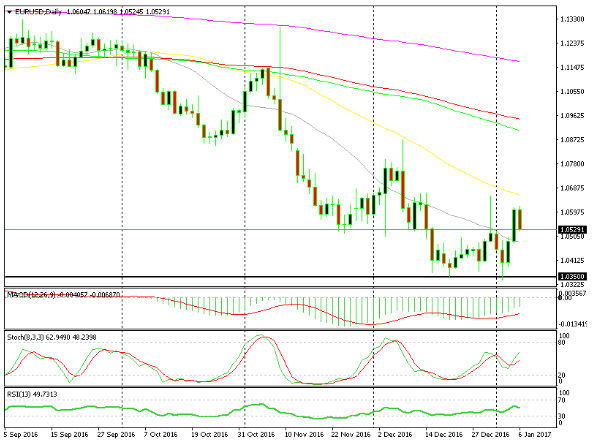 The weekly chart also looks much better now. Until 1600 hours on Friday, the weekly forex chart looked horrific for sellers, as the weekly candlestick was heading towards the close with a bullish candle.

That came after a doji two weeks ago, which is a reverse signal. That was followed by a bullish candlestick last week, so if this week closed bullish… then a trend reversal will be under way according to the technical analysis.

But, luckily for us, the price slipped down on Friday afternoon, thus closing the weekly signal as a doji. That means another trend reversal might follow, but this time in the opposite direction. Perhaps the 1.03 support level will give up for good this time. 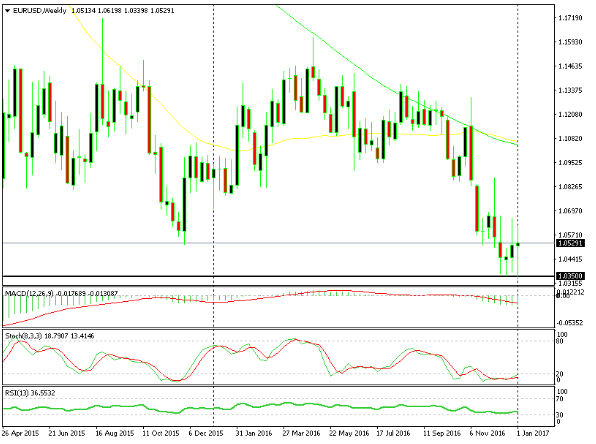 We started the new year and closed its first week on Friday. I thought that the forex market would be back to pre/post-holiday normality. But it didn´t happen this week and it made it difficult for us.

Hopefully, everyone will be back to work and forex traders will be back to their trading stations next week, so we can start trading and do business as usual. The economic data will be very light until Friday, therefore, the market sentiment will be the driving force.