We're writing after several weeks of trading politics, where these events dominated the scene and directly linked forex events – such as central bank rhetoric and economic data – were brushed aside.

This week was supposed to be the same, with Donald Trump becoming the next president of the US on Friday. But, fortunately for forex traders, the time finally came that politics left the market alone and we finally traded … forex.

We didn't get much action from Trump this week but don't worry folks, there´s plenty of that to come in the coming weeks, months and years. I´m sure these will be four (or eight?) years full of fun and surprises.

The central bankers took back control of the market, as several of them had meeting scheduled this week. The BOE chairman Carney started kicked off the week on Monday, followed by Bank of Canada (BOC) on Wednesday, Yellen's speech later that day, and the ECB wrapping up Thursday.

It wasn't a difficult week and we ended up with another great profit for the second week in a row. However, we had many open forex signals because most of them remained open for quite a long time since the forex market worked in tight ranges.

We made 162 pips this week (which could have as well been 324), but we're still satisfied with it. After all, there's only a thin line between winning and losing in this business.

We still have Mario Draghi to thank for giving the Euro another slap back, thus giving the Buck another push higher on Thursday afternoon. A lot was expected from Trump on Thursday (I can't figure out why) but at the end of the day, nothing really happened. 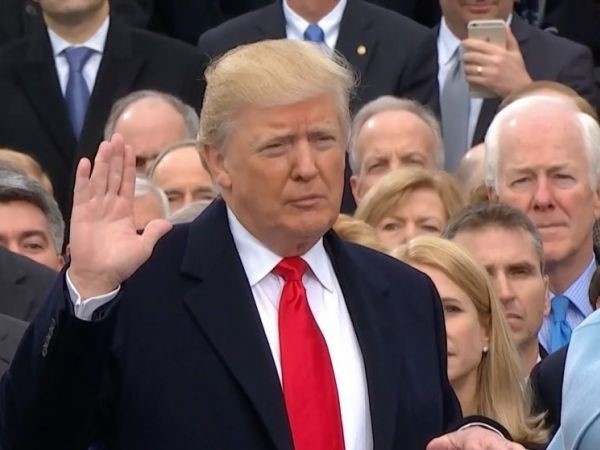 If all weeks will be like this for us (150+ pips), then I think that Trump will be beneficial to forex

Another week of January gone by, another 150+ pip profit in our forex account. We didn't start this month off in a good manner at all, but we're progressing quite well and are now more than 200 pips in profit.

We started the week on the right foot, waking up with a winning forex signal on Monday morning. Can you guess which one? It was EUR/CHF, of course. We had three more short-term signals this week in this forex pair, all of which closed in profit. The milk cow keeps providing, right?

We had a few other short-term signals, two of which hit stop loss while the rest hit the take profit target. We opened eight of these signals, which account for 42 pips out of 162 in total.

So, as you can figure out, most of the profit must have come from long-term signals, right? It was our USD/JPY signal. At one point it looked like a bad idea when this forex pair was in the middle of a long-term retrace and this signal was about 150 pips in red.

But, the ECB (European Central Bank) Chairman Draghi soothed the pain for USD bulls, as he assured the market that the ECB will keep the cash pump open for quite some time. More cash on the street means more confidence in the market and less risk aversion, hence the reverse in safe-haven currencies (or pairs), notably USD/JPY.

We could have squeezed another 40 pips on the top side, as the price stretched to 115.60. Alternatively, we could have waited longer before opening the USD/JPY signal and enter 150 pips lower, but we picked the 50 SMA in yellow for our entry.

If you wait for the perfect place, though, you will probably never be able to open a forex position, so a 120 pip profit from that signal is more than enough for now. In total, we made 162 pips this week and had an 80:20 win/loss ratio.

Given all this week's events – now that they're past us – which one do you think was the most important one in relation to forex?

Yellen's speech maybe, or perhaps Draghi´s presser? On a global scale, Trump entering the White House was the most important event politically, but the market didn't even blink during that event.

I didn't think that he was going to reveal all his fiscal plans on his first official speech as the US president, but for some reason the market was nervous.

At the end of the day, nothing happened so the most important forex event this week was the press conference from the British PM May. She didn't exactly say anything new which would take us by surprise, but I guess the forex market was expecting a bombshell that would annihilate the poor Pound.

Per her comments, Britain is heading for some sort of hard Brexit, but the market had already priced in that option. Yet, GBP pairs rallied for about 400 pips that day. She promised to take Brexit to parliament first, and that's the reason for this week's GBP rally.

The market expectations were disappointed, since expectations for a tighter monetary policy are higher now, assuming there´s a big fiscal stimulus coming up from the new administration. But, with Trump and the ECB meeting coming up in the next two days, the market didn't have enough nerves to push on either side.

We know that nothing happened on Friday, except for a small relief rally when the ceremony ended. We can´t say so about Draghi, though. The silver-tongued master played his part perfectly once again.

He disregarded the recent jump in inflation as energy was fueled and promises kept regarding the loose monetary policy, despite the Germans pulling their hair. EUR/USD started feeling weak at the knees, which turned into broad USD buying as we've often seen.

At the end of the week, we can say that the USD selloff of the last few weeks is getting weaker. The Buck has seen little to no change against most forex majors, so perhaps we might see a reverse next week.

The good data from all over the globe kept rolling this week as well. But, there were a few misses here and there, particularly in Canada and Japan.

Japanese PPI (producer price index) declined by 1.2% y/y, which is much better than last month´s reading, but the core machinery orders fell by 5.1% in December.

Another round of great data from the UK surprised the market this week. UK CPI and core CPI (consumer price index) jumped by 0.4% and 0.2%, respectively, while average hourly earnings jumped from 2.5% to 2.8% m/y, which goes totally in the opposite direction with Brexit.

Thursday was great for the US data as well, unemployment claims fell by nearly 20k, the Philly FED manufacturing index nearly doubled and housing starts beat expectations as well. Canada, on the other hand, offered quite the opposite as retail sales missed the expectations, while we saw deflation for the second month in a row.

USD/JPY has built up quite a trend in the past two months, but this year has been negative so far for this forex pair. It has managed to make a 200 pip comeback so far from 118.60s to 112.50s in more than two weeks.

Although, on Wednesday this pair formed a bullish engulfing candle. That sort of chart pattern suggests a trend reversal (to the upside this time), but didn't see a continuation and the next two daily candles closed as doji, which suggests another trend reversal, but this time to the downside.

Still, the stochastic indicator is pointing up after reaching the oversold area a couple of days ago. So, we can say that the daily chart doesn´t offer a clear direction right now. 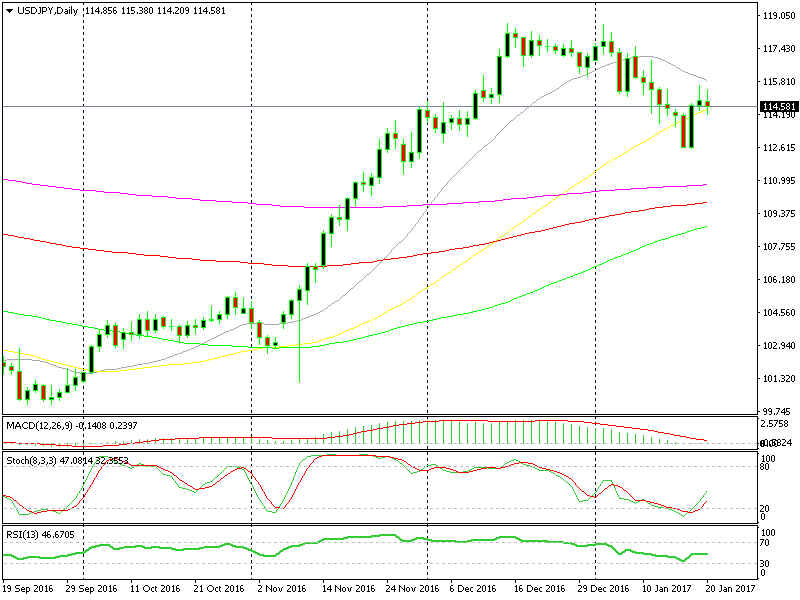 Stochastic is headed up but the two last candlesticks point down

On the weekly chart, we see the opposite. Stochastic and RSI indicators were overbought until a few days ago and are now heading down, but this week´s doji comes after several weeks of declines. That means only one thing… reversal.

Yet, the price couldn't close above the 100 simple moving average (100 SMA) in green. Again, contradictory signals on this chart, although I´m long-biased for this pair. The bigger trend is up and the Yen feels the biggest pain during periods when the negative market sentiment towards the USD turns around. 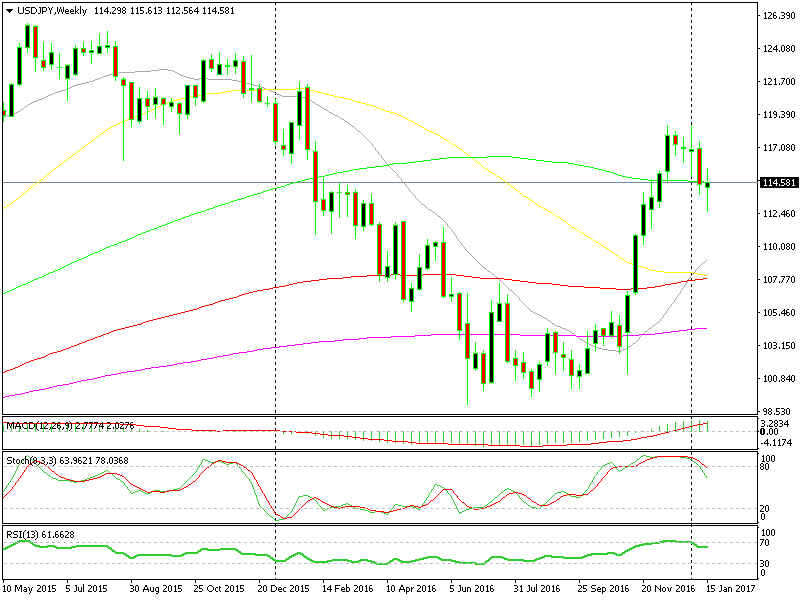 On the weekly USD/JPY chart, the technical indicators are heading down while the last candlestick points up

We ended the third week of January with another good bag of pips in our account.  It might have been double that amount, but it can always go the other way around.

Trump didn't offer us much to chew on this week, but the Draghster was more than happy to provide us with some good price action in most major forex pairs. I don't know how long the procedures will last for Trump to start making real decisions, but if he starts straight away, then next week will be very interesting.