One Battle Won, Off to the Next - Forex News by FX Leaders

One Battle Won, Off to the Next

Our USD/CAD signal finally hit take profit about an hour ago. We opened it this morning at 1.3266 where the 100 simple moving average (100 SMA) was hanging around providing resistance.

At some point, we were nearly 30 pips in red as the 100 SMA was breached. But the 50 SMA, which was about 20 pips higher, provided the second line of resistance.

It got pierced a couple of times but it wasn´t exactly broken since USD/CAD buyers couldn´t take the price far above it. The price formed two pin candlesticks on the H1 forex chart which suggest a trend reversal.

That reversal didn´t take long; right after the miss in the US existing home sales, the price started dropping like it`s hot and we´re now more than 100 pips lower. So, after some pain, we got the gains as our forex signal closed in profit.

We won that battle but working in the forex industry means a life full of battles. Our next battle is taking place in EUR/USD. We opened a sell forex signal here a while ago after the 20 SMA in grey was proving to be a strong obstacle for buyers. 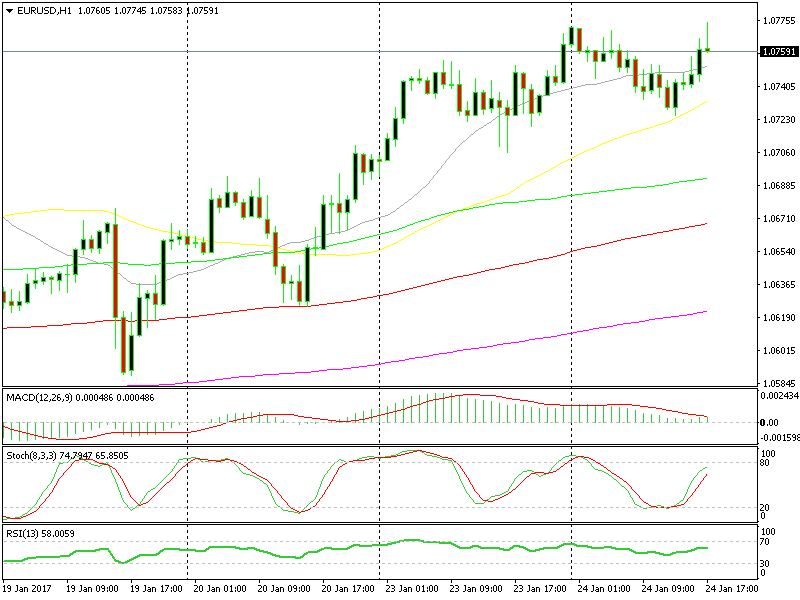 Will we win this battle judging by the chart setup?

Well that moving average was soon broken, as you can see on the H1 chart above, and this forex trade was about 25 pips in red a few minutes ago. But todays high proved too strong a level and we´re heading back down now.

We´re still in red (about 10 pips) but the stochastic and RSI indicators are almost oversold which means a possible reverse soon. Wish we could have waited a tad longer in order to get a better entry price but this chart setup seems very favourable for sellers right now, so fingers crossed and ready for the new battle.