The past several weeks have been a nightmare for most forex traders. All we learnt till now about trading charts and the data is now a distant memory. Everything the markets have been concerned with during this time (and still are) is politics, trade war, and currency war. As we referred to in the January review, we´re entering a “New Era”.

This sort of trading environment is hazardous and I´m sure there will be plenty of shocks to come. But, this week seemed as though the markets are beginning to get used to all this chaos.

No trader will ever be safe from Trump´s comments, but at least the markets are not jumping in panic after every comment… at least that´s the feeling I got this week.

The Brexit nonsense continued, with Lib Dems and the Scottish parliament the principle actors. Trump´s tweets will never end and Europe is still in danger, but the markets were less nervous. That´s all we needed, affordable movement and some common sense. So, we settled into this week quite well and got back to our normal performance, making 201 pips. 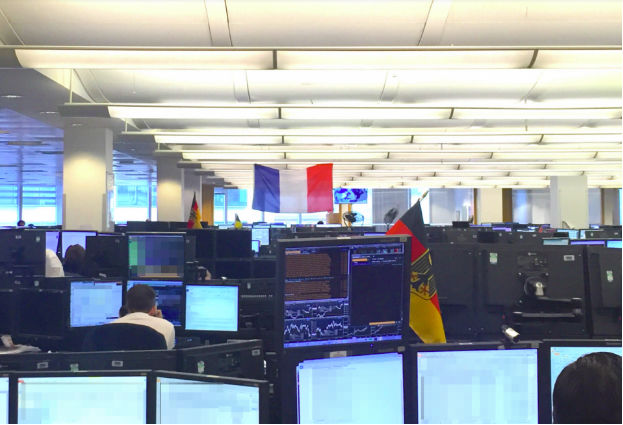 The forex market has been acting like a lunatic since Donald Trump entered office several weeks ago, but we managed to keep a clear head and make some good profit at the end.  But all that finally took its toll on us last week and we gave back some of our profit to the market. We still closed January in profit, though.

Now, we´re happy to see that we´re back to our normal selves. We closed the week with a full board of green signals and a 202 pip profit. The only losing signal we had this week was AUD/USD and it hit SL on Tuesday during a period of strong USD demand.  We opened 12 short-term forex signals this week – one of which is still live. Since we only had one losing signal, the risk/reward ratio is really good, 92:8.

Again, we spotted another opportunity to open a long-term forex signal in USD/JPY when this forex pair was finding it hard to break the 111.50-60 area, which has now turned into a support level. We could have doubled our pocket money this week, but, going against the trend is always too risky particularly in these troubled times.

You know, Trump can easily drop a bomb at any time and the market would respond in kind. Since the Yen is the ultimate safe haven, USD/JPY could plunge 10 cents in a few hours if that happens.  And we highlighted that opportunity in one of our previous article Taking Aim at USD/JPY. So, some of you might as well have taken that opportunity.

So, the new era of the global trade war is here and the forex market seems to have accepted it. The economic data is becoming less important by the day, and the market seems a bit calmer, as opposed to jumping hundreds of pips on every Trump comment tweet.

I say this is a new environment for us who weren´t around in the 70’s or 80’s before the liberal economic theory became mainstream globally. Before the fall of the Iron Gate, most of the moves and trades happened on global political macro events.

This is the case now. We´re back to ancient times and there are such events happening every day. The highlight of the week were Trump´s comments on taxes. He said that something important regarding them was going to be announced in 2-3 weeks. No one ever knows what he means when he says or does something ridiculous, but many were already expecting at least some sort of new policy on taxes.

That´s important for the economy and subsequently for financial markets because the impact on the economy would be very direct. We benefited from Trump´s comments (for once) as one of our forex signals got pushed to hit TP.

That´s actually true because you cannot decide against the majority of an entity (country) if you are part of it. So, get your papers ready Scots and bail out before too late. Obviously, I´m joking.

The Pound got a ride from that but it wasn´t all. The Liberal Democrats of UK want the Brexit deal to go through a referendum before finally triggering Article 50. This might actually happen but it might as well complicate things a lot.

Although economic data might have lost importance recently, it still offers some good opportunities to make a few pips here and there. After all, at the end of the day they add up and that´s all we want in the end, right?

So, we have to keep an eye on the numbers because this travesty can´t go on forever. The markets and the world will go back to normal some day. The notable thing this week was the miss in the Japanese and Canadian economic numbers. These two economies have been two of the weakest among developed countries for years. We saw some improvement in the recent weeks, along with the rest of the globe. But, this week´s mischief brings up old questions again.

Are they really out of the mud or was that just a short period and they will be back where they were?  Is this a sign that the recent uncertainty since Trump became president is taking its toll? If that´s the case, then it would be first manifested on the weakest links, obviously.

Ah, by the way, the Canadian unemployment report on Friday was positive at least. It gave us a few pips to buy ourselves a pint of beer on weekend.

On Monday, we pointed out that EUR/USD was at a critical level. It closed the week just below the 1.08 level which has been a really big support level for nearly a year.

The price moved above and below it a few times but eventually closed below it, which is a bearish signal. The 20 SMA in gray was hanging around there, so it was providing resistance as well. On top of that, the stochastic indicator was almost overbought on the daily forex chart. So, it was a decent opportunity to sell. We didn´t, but that was another trade idea this week if anyone took it. 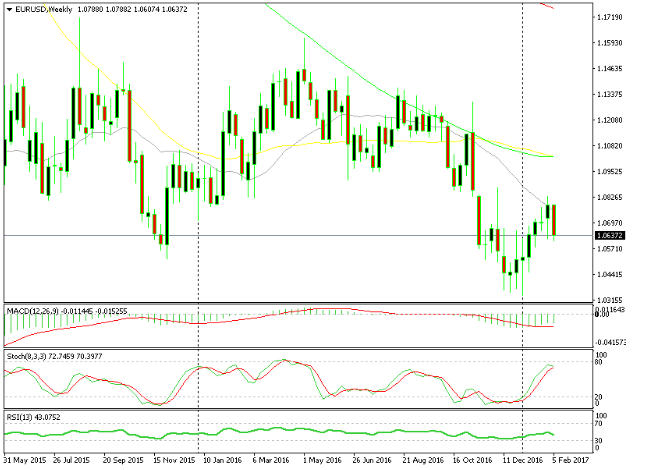 The 20 SMA and stochastic are pointing down

The bearish signal was also very clear on the daily chart. The 100 SMA in green was keeping buyers on hold, stochastic was overbought and there was also some divergence on that chart.

We´re about 200 pips lower now, but now the two charts show contradictory signals. The weekly chart is still pointing down, while the daily chart is pointing up.

Stochastic is oversold and the 50 SMA in yellow is providing support. Besides that, the area around 1.06 is a support/resistance level. Not sure which direction to take right now so we´re leaving it alone for the moment. 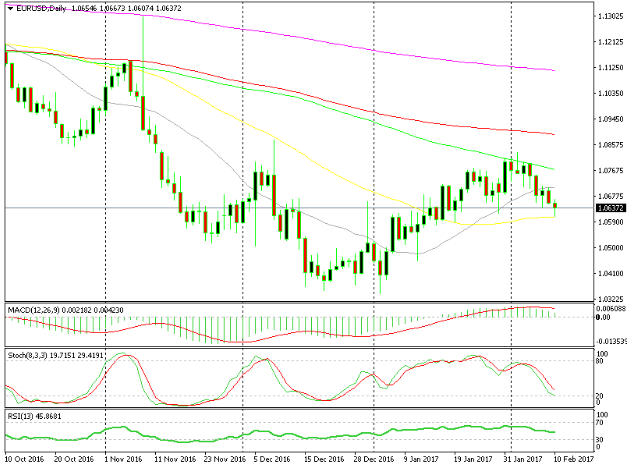 Here we see the opposing picture

The second week of February brought us back to normal, after a terrible first week. So, this weekend is going to be relaxing, especially since our forex account is 200 pips fatter. The market seems to be getting used to the Trump era because it´s coping better with everything. At least, that´s what we saw this week. But, with what we have seen recently, everything might change just like that, so we´ll try to be careful, as always.