February 27th Morning Brief – A Bulletin on the Bullion Market

In the previous week, the forex market mostly traded sideways but interestingly enough, this was not the case with Bullion. What's more surprising was the negative correlation between the bullion market and the U.S Dollar  that changed into a positive correlation. For instance, if you look at the charts of the previous week, the EUR/USD traded bearish, whereas the yellow metal edged sharply higher.

Likewise, the GBP/USD and USD/CHF also showed that the greenback traded in a bullish tone. However, the USD/JPY traded bearish on the stronger Japanese Yen, signifying that the bullish tone in the Bullion market wasn't caused by a weaker greenback. Well, one major reason that I found is the boosted safe-haven appeal because of an increased ongoing tensions around the globe. Major ones include the elections in the Euro zone, Article 50 of Brexit and the U.S President Donald Trump.

Besides that, the FOMC meeting minutes were also reluctant to support the U.S Dollar rate hiked sentiments. We all recall Fed chairwoman Janet Yellen's remarks on the rate hike. She emphasized that it's unwise to keep rates low for a long period of time, fueling the sentiment that we may not see a rate hike in March as well. Let's plan a trading day with what little notes we have.

What to Expect from Trump this Week?

This week, we need to focus on the U.S President who is due to present in the U.S. Congress for the first time on Tuesday. This will definitely reduce the uncertainties prevailing in the market. He is likely to speak about tax rate cuts, policies on controlling immigration, revoking the Affordable Care Act, eliminating regulations, something on multinational trade agreements, as well as spending more on defense & security.

During the previous week, gold continued to trade sideways in the first 3 trading days. But the last 2 trading days came with an increased volatility in the market that provided potential trading opportunities and also helped us achieve our take profits. 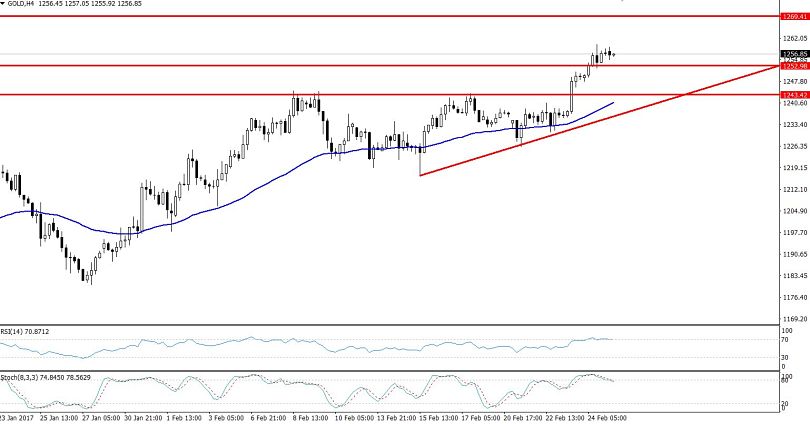 Today on the 27th of Feb, the precious metal is trading slightly higher in the Asian sessions. If we look at the gold chart in the 4-hour time frame, we can see the RSI (Relative Strength Index) is holding at 70. It shows the possibility of exhausted buyers. We may see some profit-taking in the metal before a renewed bullish momentum. Moreover, a small asymmetric triangle pattern has formed on the 1-hour chart which also indicates a tug of war between the bulls and bears.

Considering the fundamentals and technicals, I recommend investors keep their sell positions below $1258 along with a stop loss above $1262 and a take profit of $1251.

Likewise, silver has also traded bullish at $18.36 due to its strong positive correlation with gold. A major bullish momentum was caused by a breakout in an ascending triangle pattern. The metal violated a triple top resistance level around $18.069. 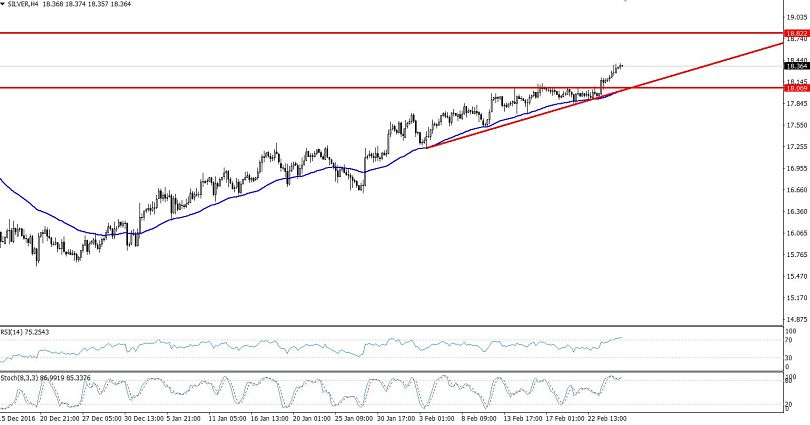 Are you looking to buy it?

In my opinion, we need to give it some time as silver may retrace back. I am saying this because of the leading indicators, particularly the RSI, that's holding at 75. It's in the overbought territory and we may see buyers taking profits before Trump's speech on Tuesday.