Last week, we saw a continued bullish momentum in the U.S Dollar. Despite the tug of war between positive and negative economic events, it helped us achieve good trading opportunities. Particularly, the U.S economy grew less than expected, core durable goods were not in favor, and the U.S. Jobless Claims fell to the lowest point in almost 44 years. At the moment, the U.S Dollar is still trading bullish at $101.43, up +0.08% in the early Asian trading session. However, most of the strength in the U.S Dollar isn't caused by these fundamentals.

Bullishness in the Dollar, Major Fundamentals

Last week, we didn't see any clear remarks from President Donald Trump but investors certainly boosted their bets on the U.S Dollar in the wake of expected tax cuts in future.  However, he hasn't signaled any sort of timeline to initiate his plans. Trump always proves that he is a businessman.  He appears in front of congress, speaks and concludes the things optimistically, but there is definitely nothing new in his speeches. Rather, we're waiting for his next speech to see when he is going to start taking action.

Janet Yellen was sounding quite hawkish in her speech on Friday. She intimated an eagerness to increase the Fed funds rate at the upcoming FOMC March 14-15 meeting. She emphasized on rate hikes, while stating that "employment and inflation are continuing to evolve in line with officials’ expectations". We have to see if the Fed increases rates in their upcoming policy meeting or not, but the market has "priced in" the sentiment for sure. Investors are shifting their investments from the safe haven assets (gold & silver) to the greenback, causing a bearish momentum in the Bullion market. Let's have a look at the available trading opportunities in the market.

The precious metal gold plunged more than 400 pips due to the hawkish remarks from several Federal Reserve officials who signaled that contractionary monetary policy is likely to come soon. Moreover, the positive fundamentals of the U.S economies divert investors focus not only to the U.S Dollar but also to the stock indices. 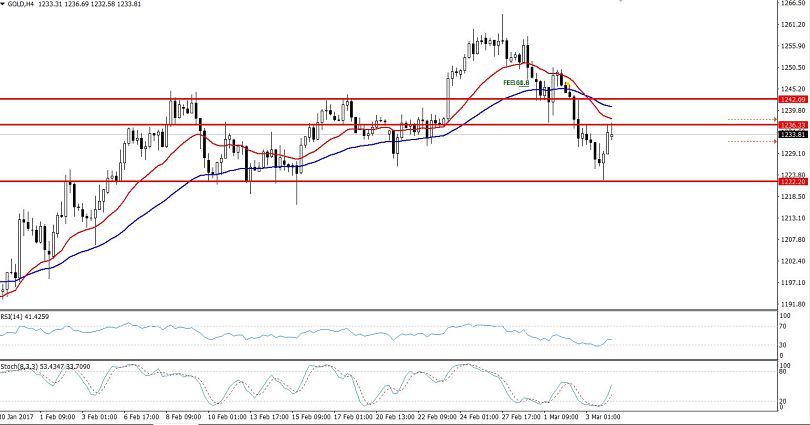 Gold plunged sharply on Friday to add more than 200 pips, but the gains were limited as the metal found a major resistance at 50% Fibonacci retracement level of $1236. Looking at the chart, we can see a clear signal of indecision between buyers and sellers. However, the technical view is suggesting a slightly bullish tone in the previous metal. The candlesticks pattern "three white soldiers" in 1- hour timeframe is boosting bets on the bullish Gold. Besides that, the leading indicator RSI has also moved into a buying territory of above 50.

Let me draw your attention towards the candlestick formation "Test Bar" in the 4-hours chart, representing that the buyers seems to be exhausted. Today, we may see some profit-taking below $1236. Investors need to keep a close eye on  $1236 – $1233. Selling is recommended only below $1233 with a take profit at $1229 and $1227.

Likewise, we have also seen some dramatic changes in the Silver. It has a very strong positive correlation with gold and a negative correlation with the U.S Dollar. Looking at the technical side of the instrument, we see that the oscillators, particular RSI and stochastics, are holding in the oversold territory. 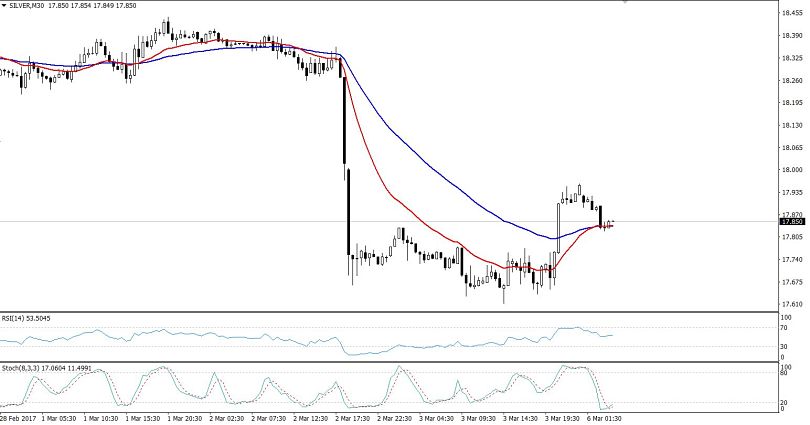 Currently, it's trading slightly bearish at $17.824, right below a 38.2% Fibonacci retracement level of a $17.928. Moreover, the 50 periods EMA is also keeping it in a bearish mode. We need to monitor the economic events from the U.S, especially the Factory Orders that are due to release in the New York trading session today.

Ethereum Price Rejected Again: Is Another Bearish Move Coming Up?
20 mins ago