Hope you guys had fun yesterday. We managed to achieve a good number of pips not only on the forex signals but also in the Nikkei, WTI Crude Oil, and Gold signals. Moreover, the market moved exactly as we predicted in our 6th of March Morning Brief. Despite the absence of major fundamentals from the U.S economy, the U.S Dollar traded in a bullish tone against a bucket of major currencies. The negative correlations between the U.S Dollar Index and Bullion lead the gold and silver deeper.

Besides that, the U.S factory orders expanded for the 2nd consecutive month. It’s showing optimistic views about the manufacturing sector, extending a support to the Fed Rate Hike sentiment.

The Market of Sentiments

This week, the U.S Dollar is merely trading on sentiments. Despite having less economic releases, the major focus of investors is on the upcoming FOMC meeting that’s taking place on March 14 – 15, keeping the remarks from Janet Yellen in focus, where she emphasized on rate hikes while stating that "employment and inflation are continuing to evolve in line with officials’ expectations". Investors have increased their bets on the U.S Dollar.

Speculators have increased the demand for the U.S Dollar even before the release of an actual decision by the Federal Reserve. The bullishness in the greenback is mostly borrowed by these short-lived sentiments that are likely to switch dramatically on the release of actual news.

In my opinion, the market has priced in the interest rate hike sentiments. Let me share the likely scenarios and their outcomes.

FED Keeps the Rate Unchanged –  We may see a sharp bearish trend in the U.S Dollar as the speculators who bought the U.S Dollar in the wake of interest rate hikes will be disappointed. They will surely sell and switch their investments to gold and other safe haven assets.

FED Hikes the Rate by 25 Base Points- In the second scenario, the Priced In U.S Dollar is likely to soar sharply but the gains will be limited as most of the investors who invested in the U.S Dollar are likely to go for profit taking.

EUR/USD is trading with a slightly bearish momentum as the investors' focus remains on the Fed rate hike sentiments. Today, the Euro is under pressure since the German factory orders are due to release with a negative forecast. It’s always important to monitor the manufacturing figures due from Germany as it’s the major manufacturing hub of the Eurozone and plays a major role in boosting the Eurozone revenues. 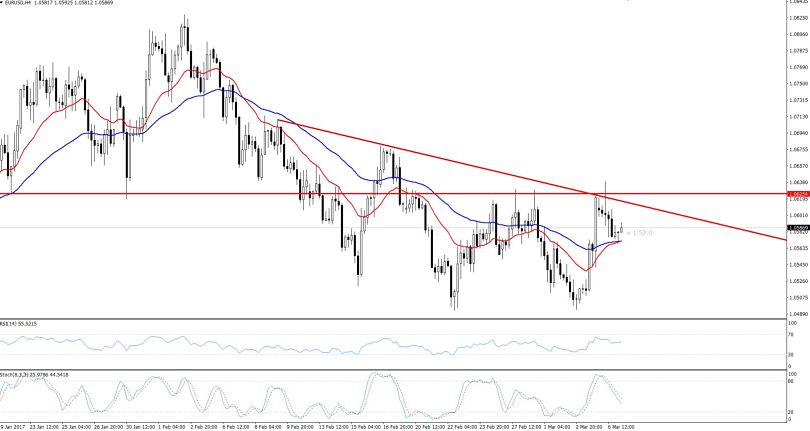 We have a very nice trade setup in the 4-hour chart as the EUR/USD is trading below a double triple top resistance level of $1.0625, and has also completed the 38.2% Fibonacci retracement. In addition, the 20 & 50 periods moving averages are also supporting the pair at  $1.05700. The technical side of the EUR/USD is quite clear and it’s providing us with 2 forex signals.

On the 7th of March, despite the absence of major fundamentals from the U.S economy, the U.S Dollar traded in a bullish tone against a bucket of major currencies.

The safe haven currency, Japanese Yen, plunged after North Korea conducted missile tests early yesterday, fueling risk aversion sentiment. The risk-averse investors preferred to keep their investments into safer assets like Bullion. However, the Japanese Yen is also considered as a safer investment due to deflation in Japan.

Actually, the Japanese economy has been in deflation for so long and their interest rates are also in the negative territory. So the investors feel safer to invest in the previously weaker currency of a world’s 3rd largest economy (as per GDP). 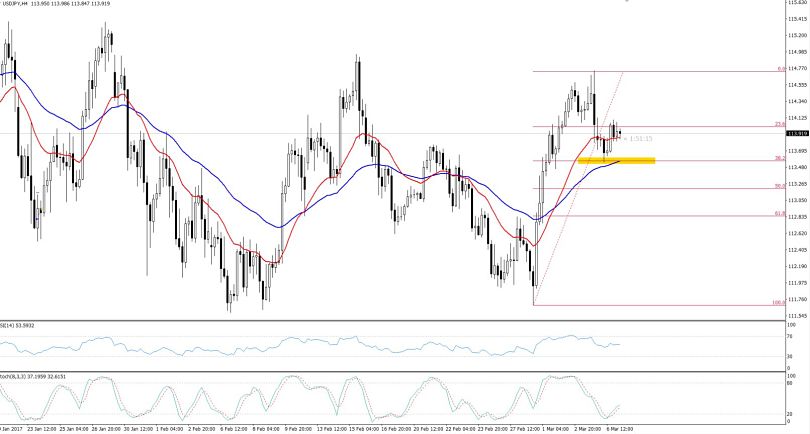 Let’s have a look at the technical side of the pair. The USD/JPY has completed a 38.2% Fibonacci retracement at $113.567 on Monday. In addition to this, we can see that the 20 & 50 periods EMA has crossed over, along with the RSI, that has a crossover below 50 in the 1-hour time frame.

Keeping the fundamentals and technicals in focus, I recommend to enter a buying position on a dip in the price. Significant trade levels are $113.635 with the take profit at $114 for the day.