As discussed in our 7th of March Morning Brief, the U.S Dollar continued to trade higher at $101.75. Investors' focus remained on the Fed fund rate hike sentiment that's coming in the week ahead. However, the gains were limited since we have been waiting for the U.S labor market figures due on Friday.

Dudley assured the importance of a rate hike as he stated in an interview last week that "animal spirits had been unleashed." Moreover, he said that contracting monetary policy "has become a lot more compelling" considering the U.S election of President Donald Trump.

Yesterday, the U.S Trade Balance deficit increase to $4.2 billion, demonstrating that the U.S economy has purchased more than they sold to other countries. This results in a lower foreign exchange rate and places adverse impact on the currency. However, the single currency had very little impact from this news. The bullish greenback also helped us with our gold signal as it matured by 40 green pips.

EUR/USD continues to trade bearish for the 3rd consecutive trading day at $1.05655. Besides the U.S fundamentals, there are major economic releases due on Wednesday. One in particular is the ECB who are weighing on the single currency. The president of the ECB, Mario Draghi, may provide some clues about their interest rate decisions and he is likely to share further plans regarding the bond buying program.

Moreover, the German manufacturing figures fell in the month of January 2017 by 7.4%. It’s highly recommended to keep a close eye on any economic event coming from Germany since it plays a major role in the Eurozone growth. 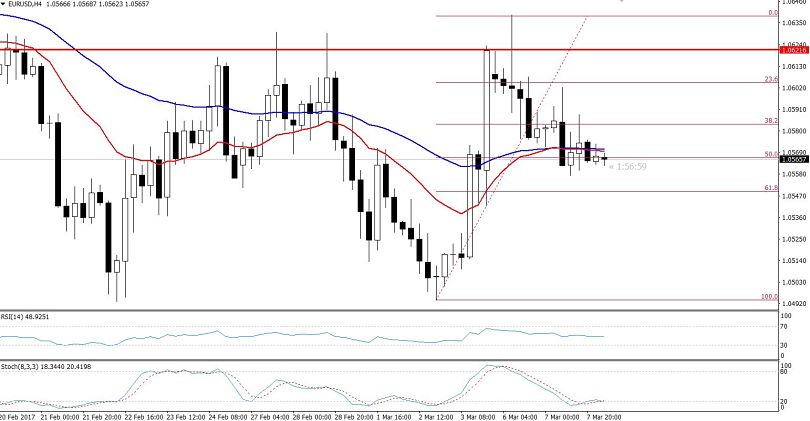 We mentioned that the EUR/USD gave us a very nice trade setup in the 4- hour chart since it traded below a double triple top resistance level of $1.0625. At this moment, the pair is trading sideways in a very narrow trading range of $1.05800 – $1.05600. The breakout in this range is likely to give us a clear idea regarding upcoming trends in the market.

In my opinion, the investors are likely to wait for the ADP- Non-Farm Employment change figure that is due to be released today at 13:15 (GMT). Economists are expecting a negative ADP figure that may extend some support to the pair. I believe having a sell position below $1.05570 will be a good idea, along with a stop loss above $1.05800 and a take profit at $1.05437.

Investors fueled demand for the Japanese Yen over the growing tensions between China and North Korea. Yesterday, China urged North Korea to forbear from more missile tests. It's important to mention that China is one of the biggest trading partners of Japan and both countries also share the borders.

So any threat, economic slowdown, or political uncertainty in China also impacts Japan, directly or indirectly. 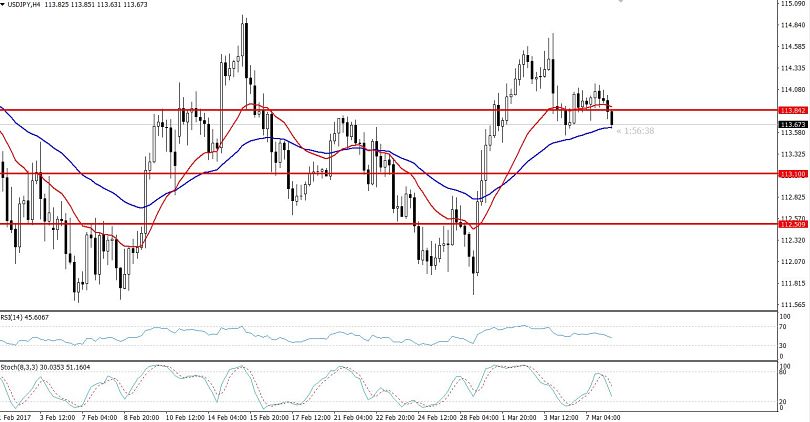 Similarly to the EUR/USD pair where we noticed a bearish trend due to a weaker Euro and a stronger greenback, the USD/JPY pair is trading in a bearish tone for the same fundamental reasons.

Having a look at the 4- hour chart, the USD/JPY is holding right above a significant double bottom support level of $113.625. It also tested the 50 periods EMA at the same level. In addition, the leading indicators, especially the RSI (below 50), is also suggesting a bearish tone in the pair.

In my previous article, I recommended that you have a buying position on a dip. "Significant trade levels are $113.635 with the take profit at $114 for the day" and this Forex signal helped us pocket 35 green pips.  Today, I would recommend that you follow the same level. The major focus needs to be on economic events from the U.S as they have potential to change the direction of the pair.