Happy Friday, guys! We have finally made it to the last day of a week. It’s a big day so I am anxiously waiting for the major opportunities coming ahead. Some of the events on today's calendar are the Non-Farm Employment Change  & the U.S Unemployment Rate, which are due later today.

Yesterday, the ECB President, Mario Draghi, was a major market mover. He extended some support to the weaker currency, Euro. He left the minimum bid rate and asset purchases program unchanged. He sounded pretty hawkish when he commented that there is no longer a sense of urgency with regard to taking further actions as well as continuing with the LTRO (targeted long-term refinancing operations).

On the contrary, the greenback remained weaker after the release of the U.S initial jobless claims. The Department of Labor reported a rise by 20k to 243k in the previous week. The increased figure by the labor market is considered unfavorable and discourages investors from buying the U.S Dollar.

EUR/USD, the Pair In Focus

Finally, the EUR/USD soared to trade at $1.0596 and has added more than 70 pips since Thursday.  As discussed above, the demand for Euro was boosted by the remarks of Mario Draghi. However, in my opinion, the gains are likely to remain limited as the focus of investors will switch to fresh economic releases from the U.S. 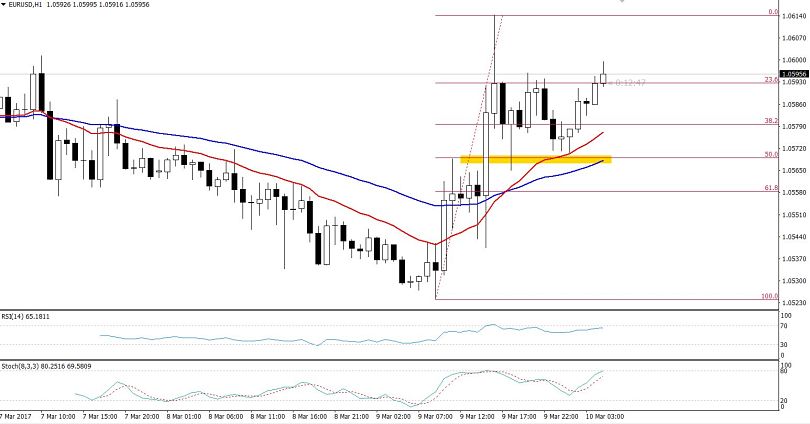 The major pair has crossed above the 50 Periods Moving Average along with a crossover in the RSI (at 65), which is representing that the bullish trend has been initiated in the EUR/USD.

In addition to this, the currency pair has formed a bullish engulfing candlestick pattern in the 4-hours time frame. Previously, the pair completed a 50% Fibonacci retracement at $1.05695 and the same level is in our focus to initiate buyings today.

The safe haven currency, Japanese Yen, lost its appeal after the favorable remarks by the ECB President Mario Draghi. In our 9th of March Morning Brief, we already discussed that the impact of the ECB is not limited to the Euro. The Japanse Yen also faced consequences in the form of low demand.

Investors switched their investments from the safe haven assets to riskier assets. That's why we can see a major drop in the prices of Gold. 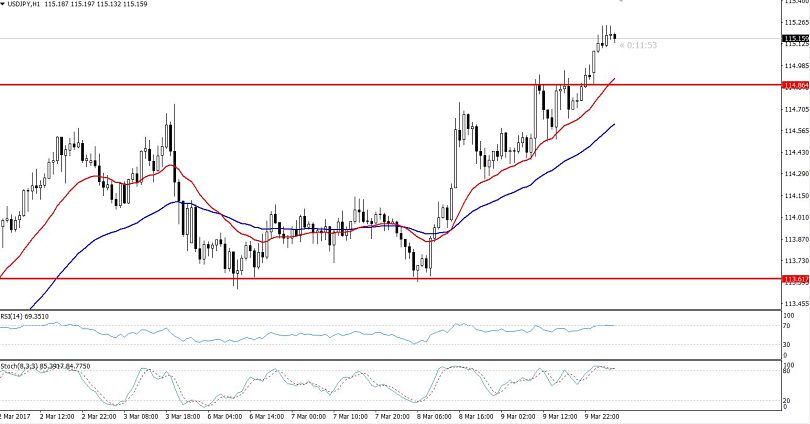 By having a look at the chart, the USD/JPY is trading at $115.192, carrying a strong bullish trend. I noticed a major resistance ahead at $115.380 that has the potential to push the market lower. However, I am also concerned about the bullish pattern "three white soldiers" that's likely to be completed in the daily chart today. Let's come back on Monday to see how the market closes today.

Forex Signal: Honestly, I don't to see any trade in the pair for now. We need to wait for the market to go a bit higher at $115.400 and I may ask you guys to enter a sell position there with a very tight stop loss since we have the Non-Farm Payroll later today.