Over the last two days, we have presented the support and resistance levels for EUR/USD and GBP/USD. But against all odds, these levels still remain valid as we haven´t moved too far from recent ranges. So today we´ll take a look at NZD/USD. Hopefully the support and resistance levels for this forex pair will give us an opportunity to open a forex trade. 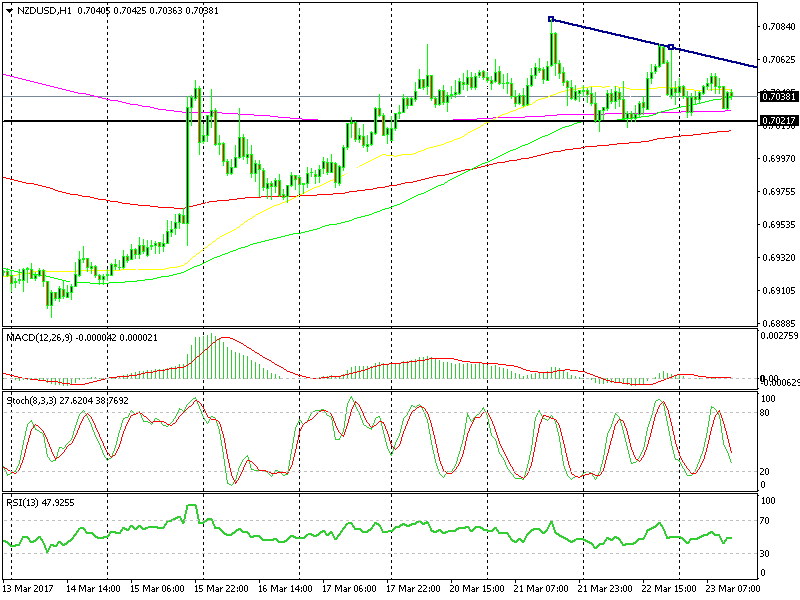 The angle in this triangle is closing

Right now we are standing at 0.7040-45, which is where we find the 50 SMA (yellow) on the H1 forex chart. That moving average has provided resistance and support in the last several days, so it´s likely to do the same now. Stay below it and it counts as resistance, move above and it turns into support.

The next line of resistance (although mild) is provided by the descending line of the triangle you see on the forex chart above. That level comes at 0.7060.

0.70 is obviously a big round level and the 50 and 100 SMAs have met each other on the H4 chart just below that, so it´ll be a massive level to watch.

You could try a little scalp (20-25 pips) with a short term buy forex trade, if we do get down there. Otherwise, if it breaks, you could also play the opposite direction with another short term trade.

Selling below 0.70, to take advantage of the first wave of selling after the break, makes sense – more or less like the break of the 112 and 111.50 levels in US/JPY we highlighted before yesterday. If you utilized that trade idea you must  be sitting on a couple of winning trades by now.