Morning traders, it’s such a pleasant morning here and I'm enjoying every bit of it. Yesterday, although the market was not very volatile, we managed to gain some green pips. The WTI Crude Oil and Nikkei signals closed in profit. We entered into crude oil twice and our second signal stayed in profit for a long time. Later, due to change in the fundamentals, it ate our stop loss. Overall, we remained in profit and that’s what that matters!

Today the central banks RBA (Reserve Bank of Australia) and ECB’s (European Central Bank) President Mario Draghi is expected to make a speech which is attracting attention and may cause volatility in the market.

The Reserve Bank of Australia is likely to release their cash rate along with a policy statement in a few of hours. The previous rate was 1.50%, and taking the improved Gold prices into account, I am expecting a neutral stance from them. Therefore, we can’t ignore the RBA Rate Statement. Investors should monitor it for further clues about the next policy action. This meeting may provoke volatility in the market if the RBA’s stance varies from market expectations.

Mario Draghi, the President of ECB, will speak at the launching of the new €50 banknote in Frankfurt. They have intensified the security features which will allow for better protection against forgers. In my opinion, his speech is unlikely to impact the market since the ECB is just replacing an old note with a new one.

Though Mario Draghi is not supposed to talk about the monetary policy actions, any remarks from him will be enough to shake the market. So, let's wait for the event to pass before we enter the market to avoid unnecessary risks.

EUR/USD – The Pair With A Major Trade Setup

As discussed in our weekly forecast report, the EUR/USD is trading mostly unchanged, around $1.0660. The tug of war between bulls and bears is still not over which is keeping traders in isolation.

This supported pair is first and foremost because the Eurozone unemployment rate failed to surprise the market as it fit within expectations. The figure dwindled to 9.5% for the month of February. This is undoubtedly better than the previous month's figure of 9.6%. Besides this change we have not seen any major fundamental shifts from the United States. That's why the pair has not moved a lot.

Let's jump to the technical side where I'll discuss the second reason for a supported EUR/USD. 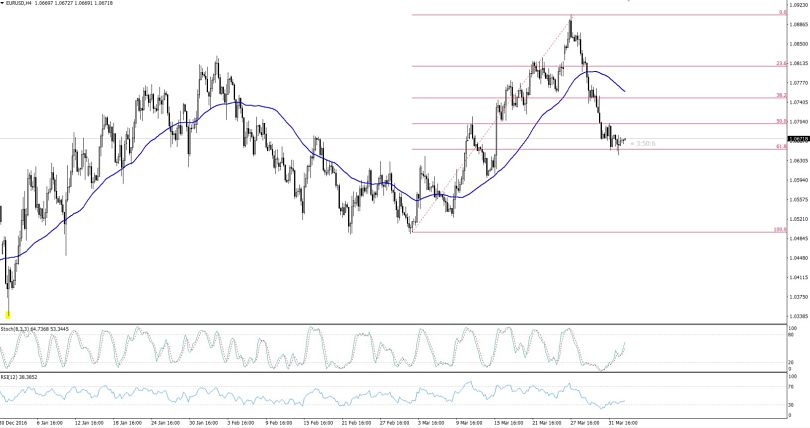 If we look at the 4 – hour chart, the EUR/USD has stuck in the brief range of $1.0650 – $1.0699. In addition to this the pair has completed a 61.8% Fibonacci retracement at $1.06510. The RSI was oversold, but the pair failed to pullback higher. Now it seems that the market is making room for further selling as the technical tools, such as the RSI, are normalized, and are not in an oversold territory anymore.

AUD/USD – The Pair in the Spotlight

Yesterday, the pair sank lower for a 3rd consecutive day due to slight strength in the U.S dollar index. However, the AUD/USD is likely to continue its bearish rally as we are expecting the release of Cash Rate decisions in the Asian sessions.

The bearish momentum strengthened after the release of Australian retail sales figures. According to the Australian Bureau of Statistics, the retail sales released at -0.1% in the month of February. The figure was worse than the previous one (0.4%), and even the expected figure of 0.3%.

This is why investors lowered their bets on the Aussie and moved their investments towards other opportunities in the market. 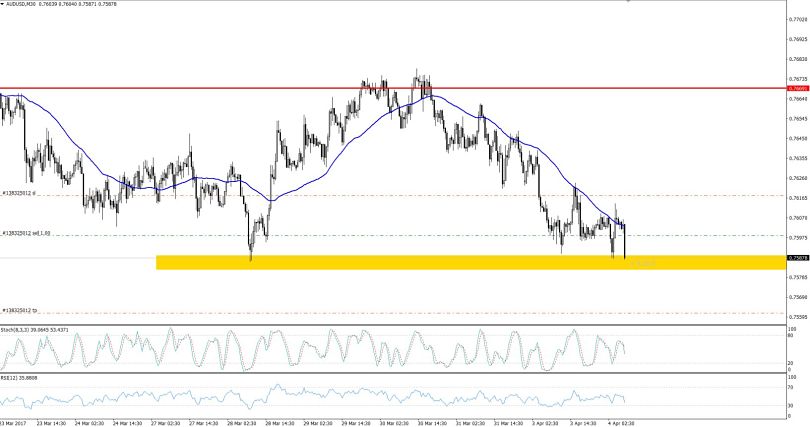 The candlestick pattern "three black crows" is holding my attention. This pattern demonstrates that sellers are dominant and we may see a continuation of the bearish trend. Besides that, the pair is holding below 50 periods EMA resistance of $0.7610, and the RSI (below 50) is also signaling a sell bias.  Lastly, we can see a descending triangle pattern in the 4 – hour chart which is about to break. We can expect the pair to test the next support level of $0.7565.

Fellows, keep a close eye on the RBA and ECB, although we aren't expecting any major changes. Nevertheless, the remarks still have the potential to move the market. Further, we need to move our stops at breakeven once our positions show us significant profits. This is how we can deal with sudden changes in the fundamentals.

Forex Signals Brief for February 1: EU Inflation and US Employment Before the FED
11 hours ago