Dovish FED but the USD Finishes on the Up… Is There War on the Horizon? – Weekly Analysis 3 – 9 April - Forex News by FX Leaders

Dovish FED but the USD Finishes on the Up… Is There War on the Horizon? – Weekly Analysis 3 – 9 April

This has been one of the quietest weeks in ages. Whilst there were quite a few important forex events, I guess the forex market was uncertain and hesitant to take sides… hence the tight range of most forex majors.

We received the FOMC minutes from the last FED meeting when they hiked the interest rates. According to the market, the minutes were dovish and didn´t warrant another rate hike soon, which became evident on Friday after the US employment figures were published.

The Buck survived the week despite all this, and it even closed the week on the up. Funny enough, this was paralleled in the Euro as well. ECB´s Draghi tried to play down the Euro, but it bounced right back up.

Last week, Brexit started for real and we saw the initial movements from the EU with some banking and political advancements (n.b. Gibraltar).

We also had some terrible political events this week; terrorist attacks in St. Petersburg and Stockholm, a gas attack in Syria, followed by a US missile attack on some of Assad´s force, and so the sentiment wasn´t that great at the end. 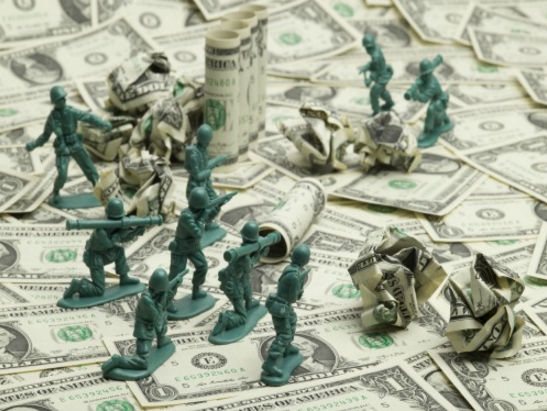 Toy soldiers may be of more help to the USD

The market was very quiet this week and trading opportunities were a bit scarce and, therefore, the number of forex signals we issued was a bit lower than usual (only six).

One of them still remains open… guess which one? Yes, the EUR/CHF signal. We love it when the price gets around the 1.07 level, and in Q1 we made 320 pips from this forex pair with short term signals only.

So, only five signals closed this week and one of them hit SL, although that signal was opened the previous week. At 81:17, the win/loss ratio is pretty good but the sample is not large enough to come to a conclusion, so we´ll have to wait for the end of the month to see the bigger picture.

Our most profitable pair this week, though, was NZD/USD. We opened two forex signals here; the first hit TP on Tuesday and we closed the second signal manually during the spike on Friday after the US employment data.

So, it has been a decent week even though it was a bit boring. We made 35 pips in total, which is a good start at least.

This was one of those weeks when you feel ashamed of humanity. It started horribly with an explosion on a metro in Russia and ended with a truck running over civilians in Sweden.

But what really hurt the sentiment was the US missile attack on some military bases in Syria. It came after a chemical attack on some civilians and, as a result, the Buck closed the week with some pips.

We know how much Trump hates a strong dollar, so I bet this wasn´t his first choice. Yep, we can figure out politics through forex – that’s the state of the financial world now!

The FOMC minutes weren´t expected to provide much action on Wednesday, but the market saw them as dovish and the Buck took a dive because rate hike expectations for June declined from 70% to around 60%, which was helped by the huge miss in NFP (non-farm payroll) numbers.

Mario Draghi and his mates at the ECB tried to be a key player in the market on Thursday and they shifted their rhetoric to bearish again after a few rosy months. However, the Euro turned out to be a bigger player when it bounced off the 1.0620 level again.

But, as the sad news increased at the end of the week, the sentiment worsened and EUR/USD finally broke below 1.06 in nearly a month. On the other hand, USD/JPY jumped about 100 pips higher in the last few trading hours of the week, so we have to watch out next Monday because this week close pretty mixed.

We also had some mixed numbers from the UK as well this week. The services PMI number surprised everyone when it jumped from 53.3 to 55. But, manufacturing PMI missed expectations while construction output, industrial production, and manufacturing production all fell. That´s pretty bad and the pound really felt this upset.

We received some really mixed numbers from the US too. The ADP non-farm employment beat expectations by about 80k, while the NFP missed out on Friday. That was very confusing for the market and the dollar moved 60 pips lower at first, only to reverse and end up about 100 pips higher.

The unemployment rate lost another 2 points this Friday, and this had some effect on the US Dollar as well.

We have looked at EUR/USD a couple of times lately, but on Friday this forex pair moved out of the range and the chart setup has changed.

You see the 100 SMA (green) we´ve been talking about on the daily chart? That has been providing solid support in the last several days, but the market sentiment worsened on Friday and we finally broke below this and the 1.0620 support level.

That opens the door to 1.050 and further but, at the same time, the market is not that bearish towards the Euro as it was the last time we were here descending. Euro shorts are not that crowded either, so we have to be careful if we´re selling. 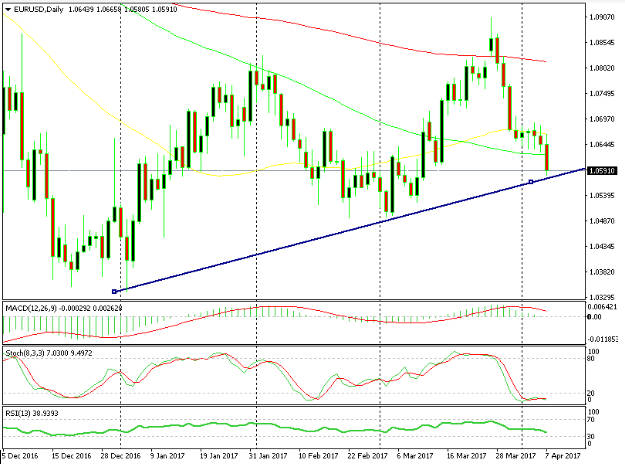 We finally broke the 100 SMA

The weekly chart also looks pretty bearish, last week saw a massive bearish engulfing candlestick and this week the move down stretched even further, breaking below the 20 SMA (grey).

We still have to take out the ascending trend line which connects the last two swing lows. By the way, I still think that we must build up longs on this forex pair and the lower we get the better the risk/reward ratio. So, 1.04 or 1.0350 would be a good place to open a long buy term trade. 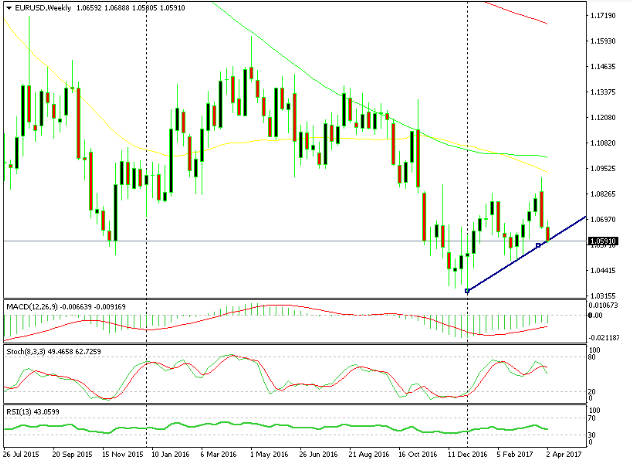 We closed a pretty quiet week which seems odd considering the volatility in the last 3-4 months. Usually, you don´t get many trading opportunities in a quiet market, but it is much easier to read it, so forex traders tend to perform well in such conditions.

We did pretty well too and closed the week without any losing signals. Next week, though, I expect a lot more volatility because support/resistance levels have finally let go on some forex majors and the global situation is at boiling point. Let´s hope it all remains under control.