The market fluctuation proves that Donald Trump is the main player in the market. Every day he has something new to say to shake up the market.  He undeniably enjoys staying in the spotlight.

Yesterday, the U.S dollar plunged sharply in contrast to most major currencies, after  President Donald Trump remarked that the currency is getting too strong. He also voiced his intention to reappoint Janet Yellen, as he likes the low-interest rate policy.

This is quite surprising as earlier he blamed China for the currency devaluation, and he is now seemingly following in their footsteps. Consequently, we have encountered major drops in the U.S dollar and huge gains in the Gold.

EUR/USD – Breakout In The Pair

As we discussed in our previous report, the EUR/USD had consolidated in a sideways trend. To be more specific, there was a bullish flag pattern on an hourly chart which was likely to break out on the release of fundamentals.

The Trump remarks finally helped the pair come out of the range and place a multi-day high of 1.0676. We are approaching Easter, which is why the market trades seem quite uncertain. 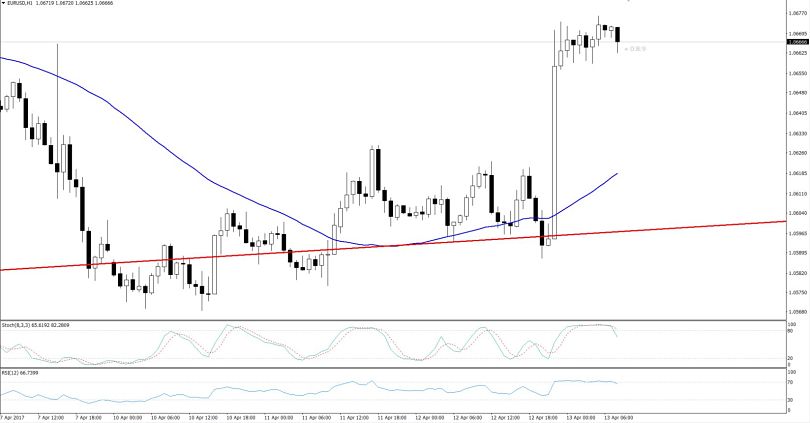 In the 4 – hour chart, we can see that the pair finally managed to come out of the $1.05660 – $1.0620 range. In addition to this, it has crossed above the 50 periods EMA, demonstrating a bullish signal. But if we look at the RSI, it has entered into the overbought (above 70) territory which means we can see a slight retracement in the pair.

Looking back at our weekly forecast, the pair has pulled back higher after testing the daily trendline support of $1.0560. This is why I decided to wait for the $1.0550 breakout.

Considering the ongoing tensions around the world, the market will probably remain unpredictable. However, the $1.0640 level seems to be a good area for buyers.

Yesterday, the Japanese Yen did really well for us. This is true despite the fact that it was a selling trend and we suggested a bullish trade to catch the retracement. Our suggested take profit was 109.850 and happily, the market placed a high at exactly 109.855, closing our trade at take profit level.

Overall, the safe-haven currency Yen is supported due to the French presidential election as well as potential military action by the United States against North Korea and Syria. Let's have a look at the technical levels for today. 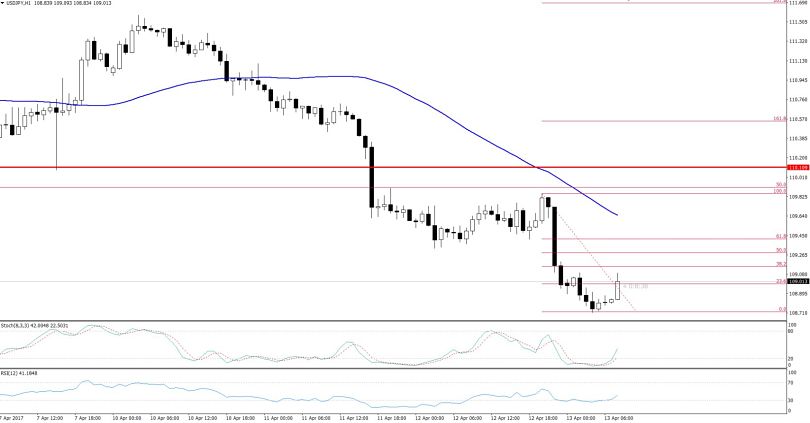 The USD/JPY has crossed half of the journey towards our long-term target level of $107.850. Yup, this is the same level that we recommended in our weekly forecast.

At the moment, the RSI in the 4 – hour chart has entered below 30, demonstrating that the pair is oversold and we may see a bullish reversal. The test bar above $108.715 is also supporting a bullish bias. Therefore, I guess it's the right time to catch the retracement up to 61.8%, with a Fibonacci level of $109.40.

Traders, as we have observed, the market trends are incredibly weak and the trends reverse suddenly due to the lack of volatility. So all we need to do is to trail our stop loss at breakeven once our trading signals show profits. Good Luck!

Ethereum Price Rejected Again: Is Another Bearish Move Coming Up?
6 hours ago