In yesterday's New York trading session, the market encountered another wave of volatility as investors increased their positions in the single currency Euro. This came specifically after the release of mixed economic figures from the United States.

Our trading signals on the Gold and Nikkei were a hole in one. Investors are now desperately looking to find out more about President Donald Trump’s tax reform plan to predict how it will impact the market. On Friday, U.S President Donald Trump stated that he is likely to reveal a tax plan on either "Wednesday or shortly thereafter" which may include a “massive tax cut” not only for individuals but also for businesses.

The good thing about Trump is that he never fails to provide the market with breaking news. He managed to weaken the Canadian dollar and strengthen the greenback with a mere twitter post. He tweeted that "Canada has made business for our dairy farmers in Wisconsin and other border states very difficult. We will not stand for this." Watch!

The demand for a single currency Euro is consistently rising. Frankly speaking, I wasn't expecting a pullback in the EUR/USD but it seems investors are in love with the Euro. Perhaps one of the reasons behind the bullish Euro is the uncertainty in Trump's policies which are keeping potential investors away from the U.S dollar. I think that's exactly what Trump wants, a weaker dollar

Consequently, investors are left with very few investment options. The results of the first round of French elections are making the Euro the most reasonable currency for investment purposes. We aren't expecting any major fundamentals from the Eurozone today. This forces us to trade based solely on technical trading levels. 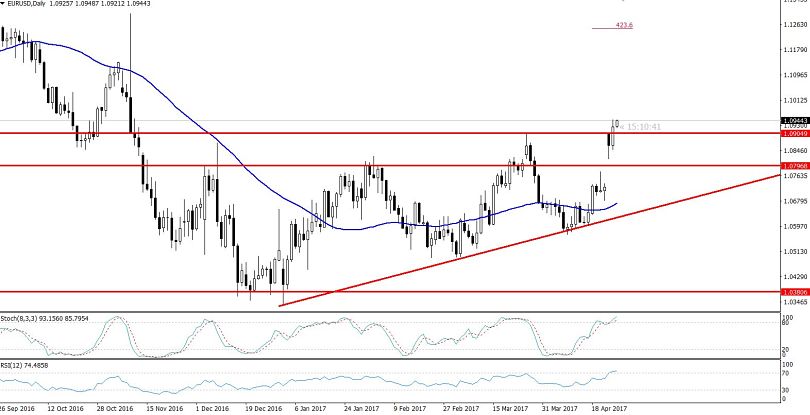 Although the single currency Euro is trading in the overbought territory against the U.S dollar, investors are not willing to take profit. Yesterday, the EUR/USD violated the major resistance level of $1.0908 to hit another resistance at $1.0946.

The pair has formed an ascending triangle pattern in the 4-hour chart which is extending a strong support at $1.0920 and a resistance at $1.0945. As we know, the ascending triangles patterns are likely to break upward. If this happens, we may see EUR/USD testing a new target level of $1.1000.

As we know, the Canadian economy sends nearly 70% of its exports to the U.S and the increased duties are likely to hurt Canadian business. Therefore, the investors withdrew from Canadian currency and the sudden sell-off caused a drop in the prices of the Loonie. 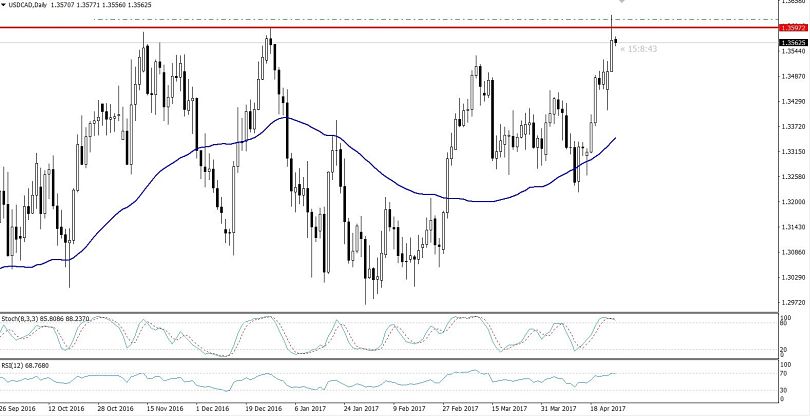 On the flip side, the RSI is still bullish above 50 along with the 50 periods EMA. I can see a strong support level at $1.3515 and this could be a potential buying level for today.

We don't have many economic events from the United States today, but Canada will be releasing Core Retail Sales and Retail Sales. Let's keep a close eye on Canadian currency pairs to spot more trading opportunities.

USD/CAD Failing at MAs, Despite Dovish Remarks by BOC's Macklem
16 hours ago