Forex Signals Brief for May 4th

Good morning traders! We had another great day yesterday. Our forex trading signals on the Gold, Nikkei, and WTI Crude Oil did a marvelous job. These signals gave us three profitable trades in a row, despite the fact that the market became highly volatile in an unpredictable manner upon the release of the hawkish FOMC statement.

Before we proceed towards fresh forex trading signals, let's recall the previous market updates. The Fed fund rate and FOMC were major market movers on Wednesday. As mentioned in our update entitled The Market Sees FOMC As Hawkish, The USD Uptrend Begins, the Federal Reserve left interest rates unchanged at 1% and downplayed the slowdown in economic growth while focusing on boosting inflation. This ultimately develops the U.S. dollar's bullish sentiment.

Moreover, the rest of the United States and Eurozone's fundamentals remained in line with expectations, for the most part. Refer to our earlier update, Hawkish FOMC Vs. Dovish Fed Fund Rate – May 3rd Daily Highlights, to read more about the major releases and their impacts on the market.

EUR/USD – A Pair With Bearish Breakout

Yesterday, the single currency Euro remained supported against the greenback because of the release of optimistic economic figures. The GDP (Gross Domestic Product) figure surged 0.5% in the Q1 of 2017. Nevertheless, the release wasn't enough to support the Euro during the New York session against the FOMC Statement. In consequence, the EUR/USD slipped to place an intraday low of $1.0881.

We have two major events ahead – the labor market figures from the United States and the final round of the French Elections on May 7th.

Due to massive volatility yesterday, the market is likely to go for correction today. We may not see any major moves ahead of NFP. Regardless, the rough idea is to enter a sell position below 1.0900 with a stop loss above $1.0945 and take profit at $1.0860.

The bearish momentum in the pair initiated when EUR/USD broke below-below 50 periods EMA support level of $1.0910 on the hourly timeframe. Although it has broken below the ascending triangle pattern at $1.0890, traders seem to be mixing it with the double bottom support level of $1.0880.

On the flip side, the momentum indicators, RSI and Stochastic are demonstrating a bearish bias in the pair. On that note, let's take a look at the intra-day trading levels.

The Japanese Yen is selling heavily since the BOJ showed a dovish stance at the policy meeting and left the rate on hold at -0.10%. The geopolitical tensions are fading due to the release of the latest fundamentals which are giving investors new reasons to sell the safe-haven assets.

As a result, the USD/JPY has been maintaining a bullish momentum for five consecutive trading days. Yesterday, the U.S central bank gave another reason to invest in the USD/JPY. Yet, the market downplayed fundamental due to major technical reasons.

Today, I'm going to wait for the market to share a clear trend since the USD/JPY is trading in between two trading levels. 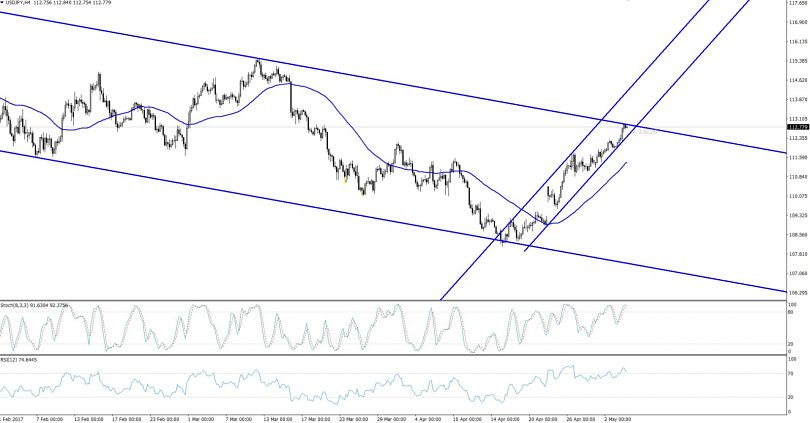 Let me draw your attention to the daily and 4 – hour timeframe, where the pair has already reached the top of its long-term bearish channel causing the USD/JPY to hold below a strong resistance level of $112.850.

Whereas on the 4-hours time frame, we can see that the bullish channel is providing sufficient room to buying for investors, we can't ignore that the pair has already entered the overbought territory. The RSI is holding above 70 and is signaling a potential retracement. In this confusing scenario, we should stay away from this pair. Waiting for the NFP is a good idea for now.

The FOMC statement is likely to play the market as it's the only major event to take place over a couple of days. However, we have unemployment claims from the United States expected to be released during the New York session. It may not cause much volatility, but still, it's worth watching.