We made it through another profitable week. I hope you are enjoying our trading signals, analysis and looking forward to more exciting trade ideas. We always aim to be there with latest updates in the market.

On Thursday, the market traded with a huge round of trading volume and volatility due to two key drivers, as we discussed in Forex Signals Brief for June 8th. I'm talking about the UK Election and ECB Meeting.

Since the polling stations in the United Kingdom General Election are closed, the exit poll was published and proposed that the Conservative Party has failed to acquire a majority.

Let me add that it's an exit poll and it can be significantly different from the actual outcome. Until now, the Conservative party is leading with the most votes. Let's wait and watch for the end results.

The European Central Bank left the minimum bid rate on hold at 0.0% and the deposit rate at -0.40%. Nevertheless, the decision was in line with projections, as we were not expecting any change in the rates this month.

However, the press conference gave us further clues regarding their next policy actions. The ECB intends to continue the bond-buying program at the same pace of EUR60bn per month until the end of December 2017. This ultimately dumps the hawkish sentiment of tapering the QE (Quantitative Easing) and causing a dive in the EUR/USD currency pair.

We have encountered a sharp decline in the gold prices from the $1295 to $1271 in the span of two days. Previously, the precious metal was supported due to the hiked haven appeal, but the written testimony from prior FBI Director Comey failed to exert any significant pressure on US President Donald Trump. In response, the weaker dollar gained support and the stronger buck helped to undermine the gold price.

Moreover, the fresh Chinese trade balance figures came in stronger than the previous one, describing a 15.5% annual gain in the exports for the month of May. The imports grew 22.1%. China is a major economy and also is part of the top gold consumer list. The improved economic conditions increase investor's confidence in the global economies and undermine the risk appetite. Ultimately a drop in risk also drops the gold prices. 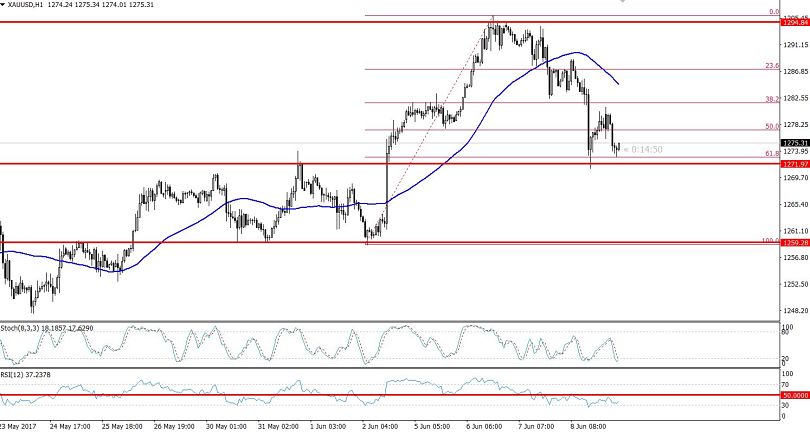 The momentum indicators, RSI and Stochastic, are both coming out of the oversold trading zone, revealing investors' buying sentiment. This is because of the fact that the gold has already completed 61.8% Fibonacci retracement. This can be seen in our hourly chart.

Undoubtedly we can't ignore that the gold is consolidating below 50-periods EMA. This demonstrates a selling trend in the metal, but our aim is to catch the short term correction, rather than jumping into a long term trend.

The Asian morning began with improved Chinese trade balance, dovish ECB with an unchanged interest rate, and, most importantly, Theresa May taking the lead. Let's wait for the final outcome of the UK elections. In my opinion, Theresa May's potential victory may impact the gold prices positively. Good luck and have a great weekend!