The global financial markets consolidated in a narrow trading range on Tuesday due to US Independence Day. The greenback was mixed against the Euro, Yen, and Sterling, these mostly consolidated in earlier ranges. Despite this, the Loonie bulls were unstoppable in their charge making the Canadian dollar the biggest mover against the US dollar.

The renewed geopolitical tensions between North Korea and the United States are increasing demand for haven assets and weighing on the indices. Yesterday, North Korea announced that it was able to successfully test-launch an intercontinental ballistic missile (ICBM) that could be aimed at certain parts of the US mainland, specifically Alaska. Consequently, the bullion market gained a support and is still trading higher.

GBP – Services PMI is due to be released at 8:30 GMT with a forecast of 53.6, slightly lower than the previous figure of 53.8. The Services PMI is a leading indicator of economic health – businesses react quickly to market conditions. Their purchasing managers hold the most current and relevant insight into the company's view of the economy.

U.S – Factory Orders m/m are scheduled to release at 14:00 (GMT) with a negative forecast of -0.4%, lower than the previous -0.2%. Factory Orders is a leading indicator of production. The rising purchase orders signal that manufacturers will increase activity as they work to fill the orders. The increased productivity is likely to boost GDP and inflation.

FOMC Meeting Minutes – What To Expect?

The FOMC Meeting Minutes are due to be released at 18:00 (GMT). The Federal Reserve (Fed) officials have drafted a plan to reduce their $4.5 trillion balance sheet, but have yet to decide the starting point.

These meeting minutes are expected to reflect on decisions made during the June 13-14 meeting. The Fed hiked the rates in the month of June and also signaled that there is likely to be one more hike in the second half of 2017. Now we have to assess if they will keep supporting the dollar, which is in trouble nowadays due to the hawkish stance from peer economies.

The EUR/USD traded mixed on Tuesday in the absence of major economic releases as the US markets were closed because of Independence Day. The major currency pair gained support just above 1.1335 (382% Fibonacci Retracement Level).

Recently, dovish remarks from ECB's Chief Economist Praet played their role in causing the Euro to fall against the Buck. He stated that the bank’s mission is not yet accomplished and that the baseline for projected inflation remains uncertain due to the current expansionary monetary policy.? 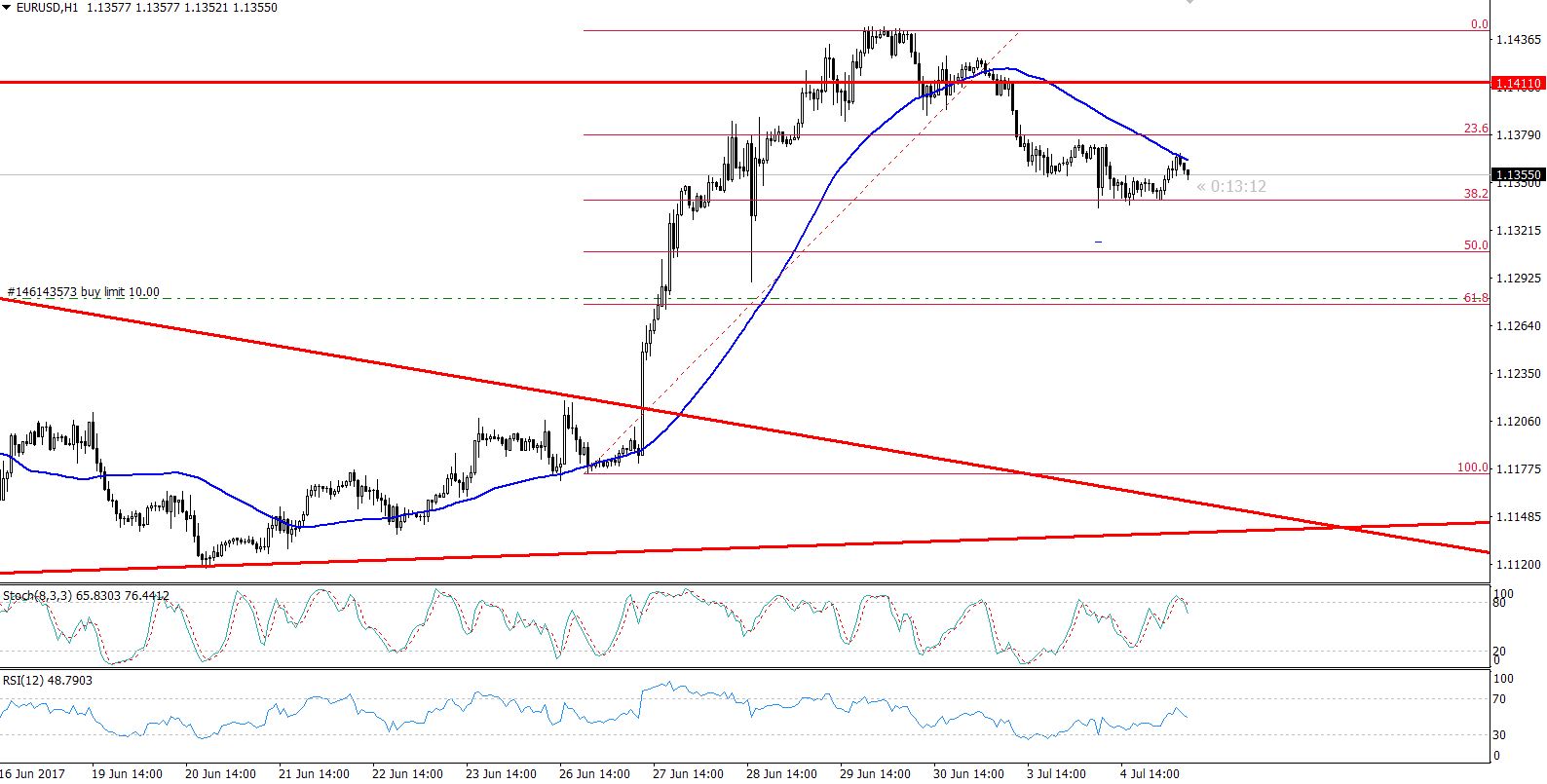 On the EUR/USD chart, the pair is consolidating below 50 – periods EMA, which signifies a selling momentum in the pair. Whereas, the overbought currency pair has already completed a 38.2% Fibonacci retracement at $1.1338. Breakage below this level is likely to push the market deeper towards 50% level of $1.1305 and even 61.8% retracement level of $1.1280.

On the hourly chart of EUR/USD, both of the leading indicators, the RSI & Stochastic, are trading in the bearish region after yesterday's crossover below 50.

Lastly, the candlestick pattern, three black crows on the daily timeframe, caught my attention. The pattern signifies a potential bearish trend in the market.

The global financial market is likely to remain calm in the Asian & European sessions, however, we can expect some action in the US sessions. Today, nothing is more important than the FOMC meeting minutes, which are likely to cause a muted reaction if the Fed fails to present something new. We are in a good position with our forex trading signals and likely to share more in the upcoming sessions. Keep updated for the latest signals and news!