Forex Signals Brief for July 5th – The Day Before The Big Day!

In the Asian session today, the market is trading calmly ahead of numerous economic events after having a volatile session due to U.S FOMC meeting minutes. The greenback remained constant against its peers after the Federal Reserve's policy meeting minutes failed to provide clarity about the next rate hike.

Some of the Fed officials thought that it would be a good idea to hike the rates while others thought that waiting until the end of  2017 or early 2018 would be more reasonable as this would present them more time to evaluate the economic growth and inflation outlook.

Therefore, the fluctuations in the markets were highly unpredictable. But today we quite a good number of fundamentals to be released ahead of a big day tomorrow, yes, the NFP day!

EUR – ECB Monetary Policy Meeting Accounts are due to be released at 11:30 (GMT) and it's highly likely to impact the single currency Euro. It's a comprehensive record of the ECB Governing Board's most recent meeting, providing in-depth insights into the economic conditions that influenced their decision on where to set interest rates.

U.S – ADP Non-Farm Employment Change is scheduled to be released at 12:15 (GMT) with a negative forecast of 184k vs 253k (previous). It's often named advance NFP due to its high correlation with the Non-farm payroll. Actually, ADP provides payroll services to the U.S corporations, and they analyze data from around 400,000 customers to drive employment growth estimations. The positive figures enhance the expectations of positive NFP.

U.S – Unemployment Claims is expected to be released at 12:30 (GMT) with a slightly positive forecast of 243k as compared to 244k (previous). This figure represents the number of individuals who filed for unemployment insurance for the first time during the past week.

CAD – Canadian economy is expected to release Trade Balance and Building Permits m/m with a negative and positive forecast respectively. The trade balance figure significantly impacts the exchange rate of the Loonie as the Canadain economy is export oriented, a drop in exports isn't something that BOC (Bank of Canada) would like.

The single currency traded in line with our previous analysis report, though it wasn't very volatile it still made a steady move towards the initial target level of $1.1303.

The global markets were fully operational but the trading conditions were inescapably very light as after the U.S Independence Day holiday investors await the big day, the NFP day.  Overall, the single currency EUR is still supported technically and on the prospects of policy actions by ECB during the next months. 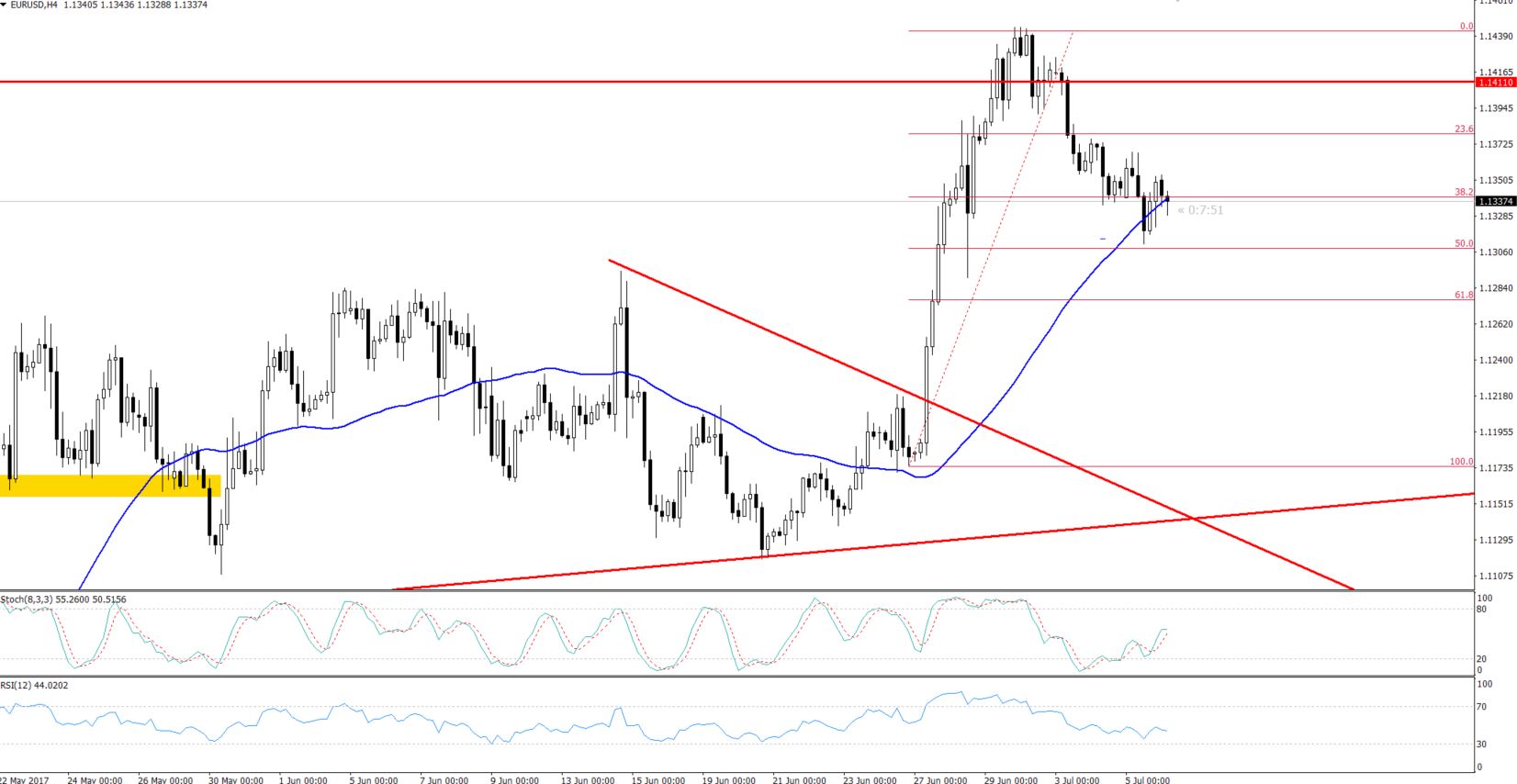 The technical outlook hasn't changed much as we can see on the hourly chart of EUR/USD that the pair is consolidating below 50 – periods EMA, signifying a bearish trend. While the currency pair has already completed 38.2% Fibonacci retracement at $1.1338 and has made its move towards 50% Fibonacci retracement level $1.1305.

On the hourly chart of EUR/USD, both of the leading indicators, the RSI & Stochastic are trading in the bearish region and signaling a bearish bias of investors.

Honestly, I would like to wait a bit for a clear trend before entering the market as the pair is more likely to get stuck in a sideways pattern ahead of major events today and tomorrow.

Today, taking a look at the fundamental side, it's definitely a day full of opportunities. In particular, investors are advised to keep track of economic events from the United States, Canada & Eurozone. In addition, it's preferred to trade level to level and avoid any long term trade as the market may change the technical outlook tomorrow on the release of U.S labor market figures. Good Luck!

We’ve recently incorporated some exciting new financial instruments in our trading signals service -gold and crude oil. We will add more instruments soon, such as CryptoCurrencies, so keep an eye out for analysis on these new instruments.