EUR/CHF Looks Like An Unstoppable Machine, What Happened To The Swissy? - Forex News by FX Leaders

EUR/CHF Looks Like An Unstoppable Machine, What Happened To The Swissy?

EUR/CHF has been in a long term downtrend which lasted about a year. But a couple of months ago, everything changed when Macron won the French presidential elections.

Since then, we have only seen one way traffic in this forex pair. A couple of weeks ago, this pair broke above 1.10 for the first time after a year, but the 1.11 resistance level was a bit too much for EUR/CHF buyers.

Well, that level didn´t last long though; the 1.11 resistance level was broken this week, which has been the best week for this pair so far since January 2015 when the SNB (Swiss National Bank) killed half of forex accounts by removing the 1.20 peg in EUR/CHF.

This week, EUR/CHF has climbed about 250 pips, which is huge by this pair´s standards. The SNB might be behind this move, but I know there are quite a few hedge and investment funds involved as well.

From what we know so far, the ECB (European Central Bank) is going to start tightening their monetary policy soon, while we have heard nothing from the SNB, so the big names in the industry feel more comfortable sticking to their long EUR/CHF trades and adding more. 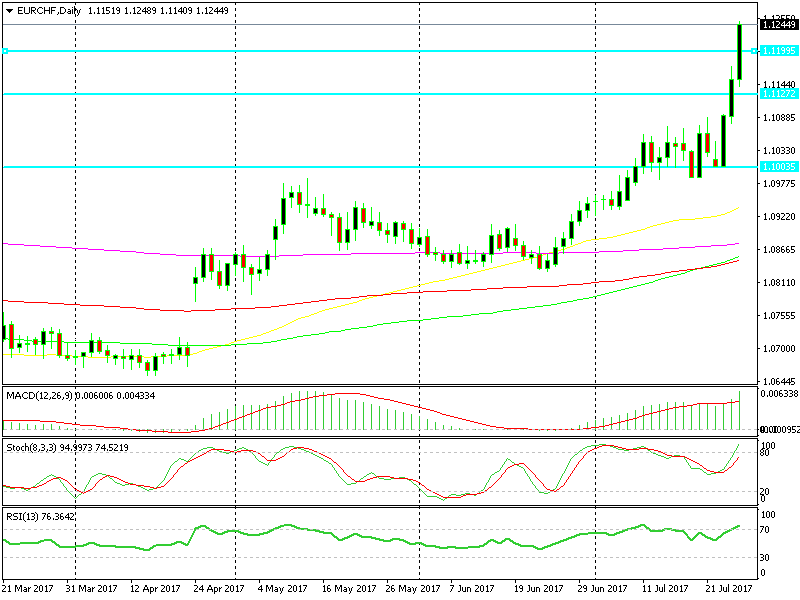 These are the main levels where we can buy

As you can see from the weekly chart above, we have broken the resistance levels, so they are likely to turn into support on the way down. We have touched the 100 SMA (red) today, which is an obstacle on the way up and it might force a retrace soon.

Forex Signals Brief for September 28: More FED Speakers and US Data to Keep the USD Up
14 hours ago