Gold Is Approaching An Important Level. Third Time A Charm or Are We Going Back Down? - Forex News by FX Leaders

Gold Is Approaching An Important Level. Third Time A Charm or Are We Going Back Down?

As my mate Arslan pointed out in the morning brief yesterday, Gold is headed towards a very important level. It has climbed up nearly $90 since early July (don’t be surprised, it´s Gold we´re talking about) and now we´re getting pretty close to the massive resistance level at $1,296.

At first, it was the Dollar weakness which sent Gold surging until the end of July. In the first week of August we saw a slight pullback, to the 50 (yellow) and 100 (green) SMAs, but then North Korea came to the battlefield ready to go to war and Gold started climbing higher again. 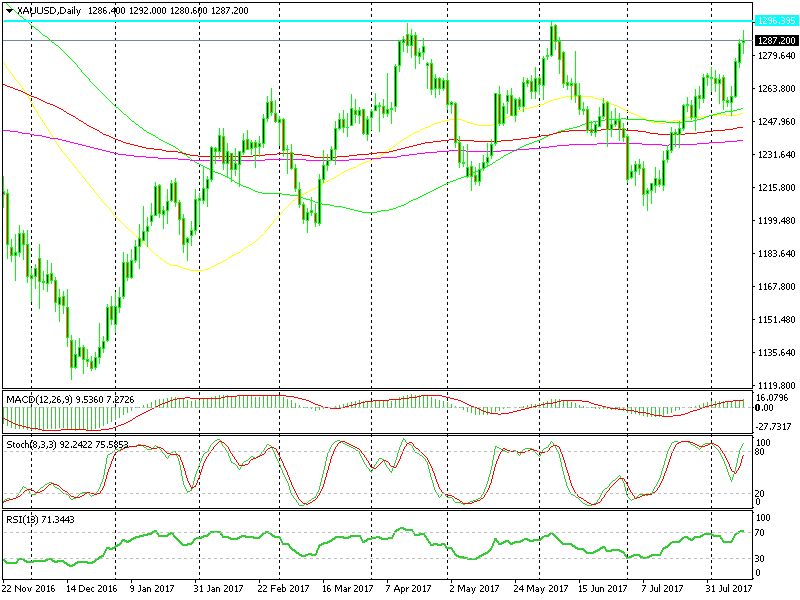 This is a huge level to overcome, but this is Gold, so you never know

The disappointing PPI inflation numbers yesterday and the CPI numbers today gave Gold the last push higher and now we are close to the $1,296 resistance level.

This is a double top chart formation which hasn’t quite worked out, but it surely is providing resistance, so now it might be the third time that this level has to do a job in reversing the price back down.

But tensions between the US and North Korea are escalating and Gold might as well break above this level. So, we have to wait and see how this mockery ends. If it wears out over the weekend, then we might see a reverse happen pretty quickly.

Trade Idea: In this case, I would sell Gold where it is now and place a stop above resistance, probably around $1,298 or even $2,000. The first TP target is at the 2 MSA around $1,250 and the second one is at the bottom of the previous swing low above $1,200, so the risk/reward ratio is pretty luring for sellers.