Triangle in USD/JPY Is About to Explode

USD/JPY has lost considerable ground over the last three weeks, but the decline seems to have stopped temporarily. The reason for this is the support level around 108.50- because it is a major level, the buffer zone for this support area stretches from 108 to 109.

The price had bounced off of this area many times last year, and USD/JPY sellers are still finding this level difficult to break. They have been pushing continuously downward over the last few days, but every time we get around here, the price bounces higher. 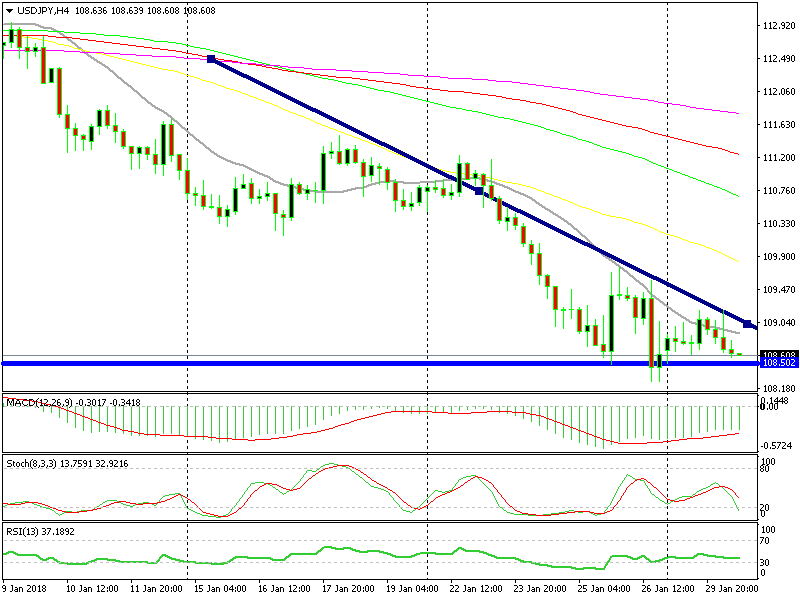 The triangle is getting narrower

It is obvious that buyers have become active down here, while the sellers cash in on their sell positions. The bounces have been very limited, and in fact, they have been getting weaker each time.

The bounces have been getting lower because of the 20 SMA (grey). This moving average has provided resistance since last Thursday, and despite being pierced a few times, the price has returned back below it.

A horizontal support line and a descending moving average have formed a triangle. The triangle has been getting narrower, and we are about to explode in either direction, according to triangle and wedges strategy.

My feeling is that the triangle will be broken to the upside.  The USD has lost approximately 60-70 pips across the board over the last hour or so, and nevertheless, the Yen is not gaining against the Buck. This means that the support is staying; after all, this is a massive support area. Once the USD buyers return, USD/JPY is likely to jump higher.