In one of the previous cryptocurrency updates, we highlighted a certain level in Bitcoin. This level was the $11,600-800 area which is where the 200 SMA was standing on the H4 chart. This moving average had provided resistance late last week and early this week. So, we thought that this might be the place where this retrace lower ended.

Although, that moving average didn’t last long. It was broken as I was posting that update. The sellers had another go at major cryptocurrencies and Bitcoin dived to $10,282. That’s the price on my broker’s platform, at least.

That’s pretty close to the major support/resistance level at $10,000. That is a big level in itself that sellers have to face if they want to take control of Bitcoin and the crypto market in general, since Bitcoin is the guide for cryptos in general 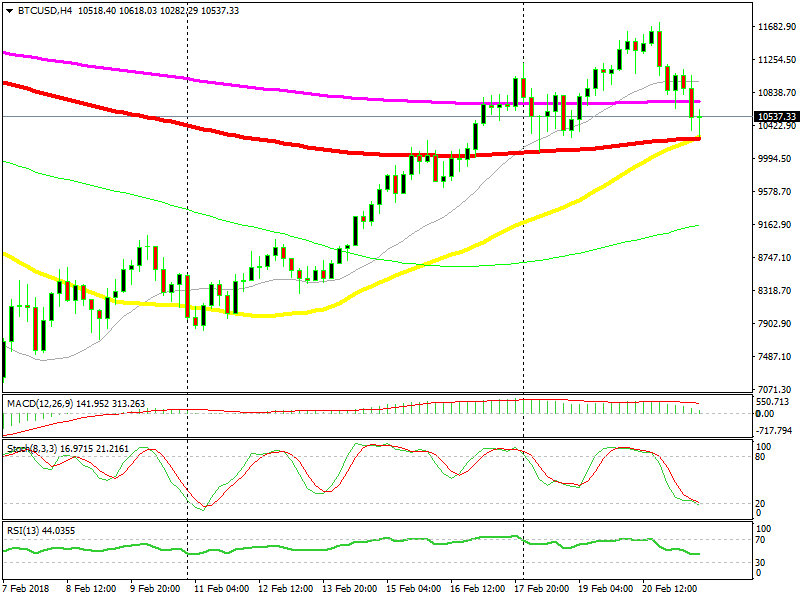 But before that, the sellers have another support level to break, which is just as important. That support is provided by two moving averages, the 100 smooth MA (red) and the 200 simple MA (yellow).

The 50 SMA has provided support and resistance about two weeks ago, while the 100 SMA has been active on this chart timeframe more recently. As you can see, it provided resistance by the middle of last week and after being broken, it turned into support and has refused the price on pullbacks lower.

It is doing the same now. In fact, this H4 candlestick is about to close as a pin, which is a reversing signal after a pullback. The retrace seems complete also, since the stochastic indicator is oversold. If this candlesick closes as it is, then according to forex textbooks, we should expect a continuation of the uptrend. Let’s see if cryptocurrencies will reverse soon.