USD/CAD was falling pretty fast during the second half of December and in January, but in February the trend reversed completely. This forex pair started the month near the lows at 1.2250, but ended the month about 600 pips higher.

Crude Oil dived more than six dollars early in February and the Canadian Dollar usually follows oil, so USD/CAD went up. In the last two days, Trump’s comments about tarrifs on steel and aluminum sent this pair more than 100 pips higher. The Canadian GDP report this afternoon helped as well because Q3 was revised lower to 1.5% from 1.7%. This month also came lower at 0.1%, from 0.4% in the previous one.

As a result, USD/CAD surged higher again today and now it faces a mid-term resistance level. This resistance level comes at 1.2915-20. In the chart below we can see that it has reversed the price down several times in October, November and December last year. 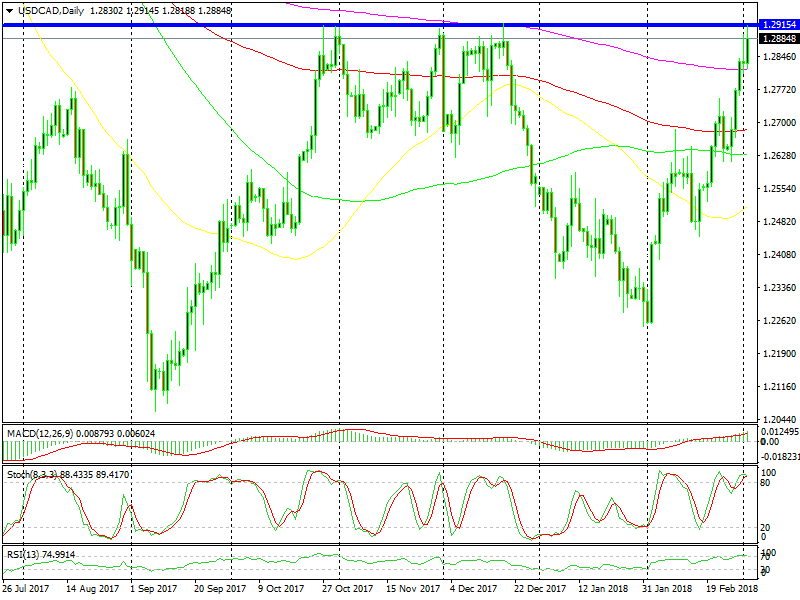 Today, the price kissed that level and pulled back. I don’t know if the trend will reverse to bearish now, but you can see that there is some strong sell interest up there since this pair is about 40 pips lower now. Above there comes the big round level at 1.30.

We can find the 100 SMA close by on the weekly chart, which will add more strength to that level. Besides that, the stochastic indicator is almost overbought, which strengthens the case for a trend reversal. But if fundamentals disagree, then that level might be broken fairly soon.

Depends how strong Trump pushes for tariffs. Canada may be exempted but that’s not certain. The market will close soon, so if the buyers will have another go at the 1.2920 level, it won’t be today. We’ll see what happens over the weekend. Keep an eye on the news for Trump.