Yesterday, EU and Brexit officials were out with comments about the deal that both sides are trying to reach. The comments were positive and both sides said that they agreed on the majority of issues. This is the first time that we hear positive comments from UK and EU officials so the market got excited. Today though, it is trying to make up its mind ahead of another big day tomorrow.

Traders aren’t sure which side to pick today

Sentiment improved in the forex market yesterday when EU and UK officials came out of the meeting all smiley. It seems like they are finding a golden middle way, but we know that the UK has swerved backwards. They said that they had agreed on most terms, although the financial services and the Irish border remain unresolved. They are the most important issues of Brexit to be honest.

At least, they have agreed to the rights of the citizens. We know that there are a few million EU citizens living in the UK, mainly from Eastern Europe, but there are also several millions or more British citizens living in Europe. We have only heard the loud noises from Brexiteers, moaning about the number of Eastern Europeans in the UK, but this goes both ways; the Brexiteers just didn’t want to acknowledge that.

Anyway, the market got excited to hear positive comments from both sides on Brexit and the sentiment improved. The GBP rallied since it is the primary beneficiary of a soft Brexit, if that is the case. The Euro also benefits from it, although to a lesser degree. So, the Euro rallied as well, triggering the stop loss of our sell signal. We opened that signal at the 50 SMA on the H1 chart, since the trend of the previous several days was bearish.

Today, the market is trying to figure out what to do next. Tomorrow, the Fed is holding its meeting and the consensus is that they will hike the rates by 25 basis points (bps). The UK earnings report is also scheduled for tomorrow, followed by the Bank of England (BOE) meeting on Thursday. So, forex traders are trying not to be caught on the wrong side.

Therefore, the price action has been pretty slow today. Although, some pairs are trying to make a move. EUR/USD and GBP/USD are retracing lower, so it seems like forex traders are closing some of yesterday’s positions. We saw this as a good opportunity to open a forex signal, which we’ll explain below.

Yesterday, we mentioned that cryptocurrencies are not respecting the chart setups correctly, especially the bullish formations. Bitcoin and other major cryptos have made a few pins and dojis on the daily chart. Besides that, the stochastic indicator has been oversold for quite some time on the larger timeframes.

Yet, the jumps have been getting smaller. Sometimes they are not happening at all. On Sunday, most of the major cryptos formed a daily pin/hammer, which is a reversing signal after a downtrend.

But, the follow-through yesterday was pretty weak. Litecoin moved about $10 higher yesterday, although that’s not what we are used to seeing in cryptocurrencies. Today, the buyers don’t seem to be able to push any higher. In fact, sellers had a go earlier on. They pushed cryptocurencies lower but they are back up now where they started the day.

Buyers are not jumping in after any sort of pullback like they used to until very recently. So, it looks like the public has become more informed about cryptocurrencies. That’s a good sign for the cryptocurrency market. 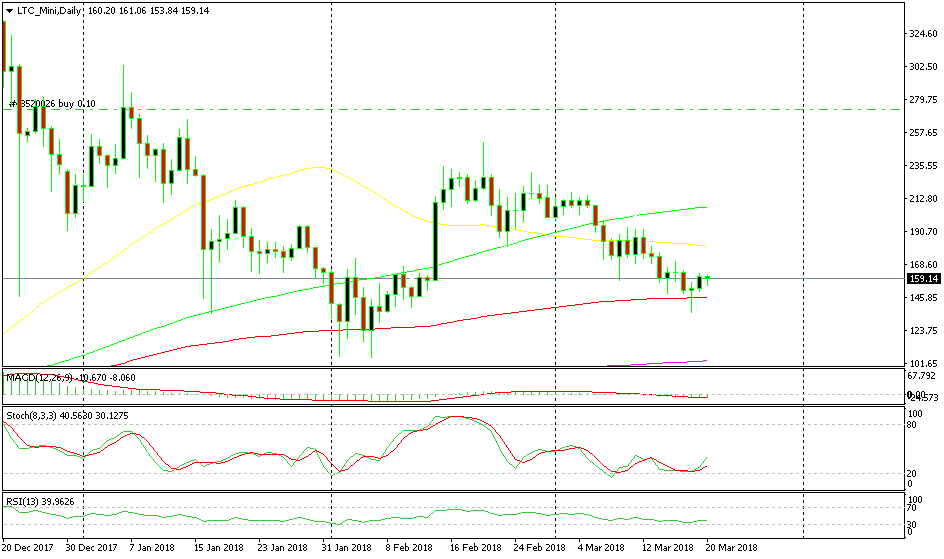 There’s no follow-through from the bullish setup today 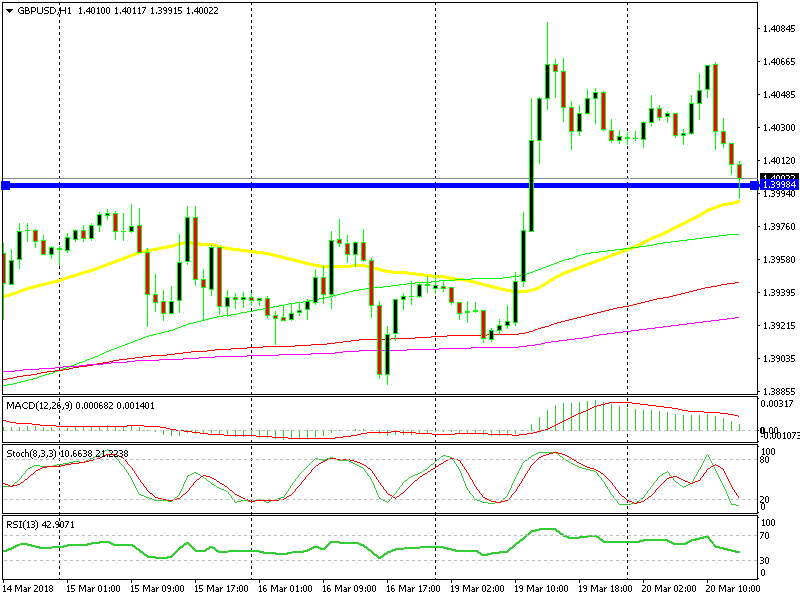 The next leg of the downtrend is resuming

We opened a buy forex signal in GBP/USD a while ago. This pair was retracing lower after the 180 pip surge yesterday. But, the 50 SMA (yellow) provided support on the H1 chart and the 1.40 level is also helping the buyers. The stochastic indicator is oversold, which means that the retrace down is over. Now, the reverse higher should follow.

Traders seem uncertain today after the sentiment improvement yesterday and before the Fed meeting tomorrow. There is a slight demand for the USD, but that is probably forex traders unloading some of yesterday’s positions. So, I expect the market to be quiet during the US session too.