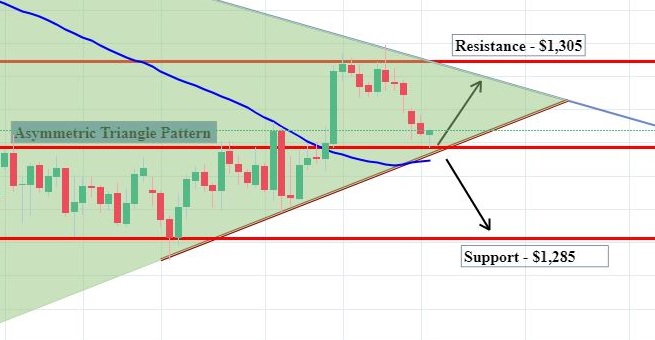 A Dramatic Dip In Gold – Asymmetric Triangle Eyed for Support

On Monday, gold traded bearish, falling further beneath the $1,300 level amid fading safe-haven demand on the back of reducing geopolitical tensions. Once again it’s President Trump behind it. The demand for risky investments boosted after Trump declared on Sunday that a U.S. team had entered North Korea for the preparation of a historic summit between him and North Korean leader Kim Jong Un. As you know, the lack of uncertainty hurts safe haven investments like gold and helps stock indices to boost.

By the way, we don’t have any economic event as the market is enjoying the holiday. But gold is forming an exciting trade setup. Let’s check it out…

However, considering the thin trading volume and lack of economic data, we can expect gold to continue trading in the range $1,295 – $1,305. Both leading indicators, RSI and Stochastics, have entered the oversold zone signaling that sellers could return from here and attempt to bounce off the support level of $1,295.

Gold Slips Below $1,770 - Stronger US Retail Sales in Play
9 hours ago