What Is Going on in Italy? The Italian Job - Forex News by FX Leaders 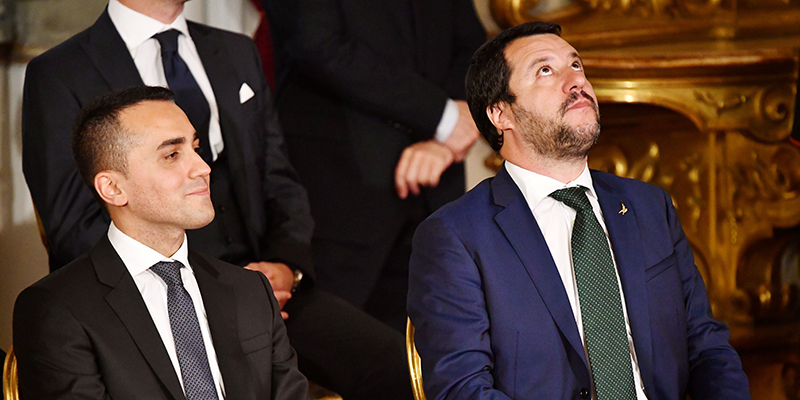 What Is Going on in Italy? The Italian Job

The two new Italian leaders waiting for a divine signal

Italy is in a middle of a political crisis. Someone can argue that it is in a middle of a financial crisis as well. That’s true to some extent. It is not that the economy is plunging in Italy. It is not exactly flourishing either but it is not really in a crisis. In fact, it was on a good run for more than a year. The financial stimulus form the European Central Bank started giving its effects last year, so the Italian and other Eurozone economies improved considerably. The last few months have been slow, but that has been the case for all the Eurozone.

So, it is not an economic crisis, but rather a financial crisis which has been weighing on the shoulders of the Italian taxpayers. This crisis comes from the high public debt that Italy has. Most of the debt is held by Italian citizens, but it is still pretty high. The Italian Debt stands at 2.1 Billion Euros, which means 130% of its GDP.

The taxes are pretty high too, which are weighing on the ordinary Italian worker. Income tax is progressive in Italy, but most of the workforce falls 38% and 41%.

If you work in Italy and earn a bit more than 2,000 Euros per month before tax, you’d pay around 40% income tax. Add more than 9% for social security and you end up giving around 50% of your income to the government as tax.

The debt has increased considerably since the 2008 global financial crisis. The bailout of Italian Banks, as well as the economic crisis during the crisis has increased the public debt. While the economic crisis was horrible for everyone and it came to Europe overnight from the US, the bailout of Italian banks wasn’t the best approach. The bad debt of Italian banks was counted very perniciously so they ended up with a lot of bad debt which could have been recuperated. In comparison, the German banks hold a lot of financial derivatives which are dangerous as the 2008 crisis showed. The root of that crisis which still drags many global economies down was the financial derivatives of US banks. So, Italian banks were bailed out by Italian government which used tax money for these operations.

That increased the public debt and reduced spending and investments on infrastructure in the last several years. Higher debt means higher taxes and to some extent lower pensions. As a result, many Italian pensioners have moved to nearby countries like Albania, where their pensions buy more and last much longer, just like the Britons move to Spain and Portugal at that age.

So, the taxes are massive and that’s not even being translated into public investment and higher social security, like in Northern European countries that have similar taxes. As a result, the Italians have been growing increasingly frustrated. Add there the massive influx of immigration from Africa and the Middle East which Italy has been left to handle alone for the major part and the situation gets toxic among the ordinary Italian.

The two main parties that won the last elections tried to play this situation in their favour. It’s not as they are trying to make the most of it purely for political influence. The Legga Nord and Cinque Stelle are genuinely concerned and the leaders are young guys, not some old bureaucrats who are counting their last days.

They are both clearly against immigration and only today (Sunday) I heard Salvini state in Sicily that illegal immigrants should pack their bags soon. Sicily has been one of the main entry points for immigrants from North Africa.

They are also against the austerity measures that have been enforced on Italy by the EU. We heard rumours from them some months ago that leaving the Euro and adopting the Lira back is an opportunity, although they have denied leaving the Euro now. But, they are both against the austerity measures. They have promised tax cuts and increased spending for pensions and public investment.

But, that still goes against the strong rules that the EU has set for Italy. Now, the two parties have backed off from leaving the Euro and today I heard some encouraging words from higher European officials such as Junker as well as Merkel. They said that the EU should respect Italy more. That means that the Italian government will have some more maneuvering room regarding taxes and spending. That’s a positive, so it seems like there might be a consensus after all.

The head of the Italian government is a technocrat put in position by the President, but we know there will be new elections soon, once the summer holiday season is over and these two or perhaps just one of them will win again and they will choose their own Prime Minister.

That is where Italy stands right now. So, the financial markets are scared of what might be coming, hence the panic that set of across all markets last week. The encouraging comments from both sides, the Italian politicians and the EU are a great sign, but no one knows how things will go for certain. We have to wait until late summer or early Autumn to see what direction the Italian Job will take.