The Greenback Is Extending Early-March's Gains.

Early in the Asian session, the unemployment rate fell to 5.3% against expectations for it to remain unchanged at 5.4%. That was a bit unexpected and it provided support for AUD/USD sending it around 50 pips higher. The NZD also received some decent bids from the fall in Australian unemployment rate. In the European session, the UK retail sales report was the most important economic release. It was another positive surprise as retail sales jumped by 0.7% in July against 0.2% expected. The subcomponents of the report were also very positive, which we will explain in the sections below. Nonetheless, the GBP is still during the European session.

The Turkish Lira is continuing to recover today as USD/TRY falls below 6 and is trading now in the 5.70 region. That has eased the worries about a financial meltdown in Turkey and a possible contagion to other emerging markets. Stock markets are recuperating too as a result, albeit pretty slowly, especially European stocks.

German HPI – The wholesale price index was expected to grow by 0.5%, but it fell flat at 0.0% this month. This was a bit unexpected after three consecutive positive months. Although, prices didn’t decline at least.

Japan May Fall Into Recession – Ex Bank of Japan economist said in an interview with Reuters this morning that Japan might slip into recession next year or in 2020. The reason for this is the hike in the sales tax that is coming next year, but you never know how things will turn out.

UK Retail Sales – Retail sales were expected to grow by 0.25% in July after falling by 0.5% in June, but instead they jumped by 0.7%. The yearly sales jumped by 3.5% from 2.9% expected. Core retail sales also came much higher, core monthly sales came at 0.9% versus 0% expected, while yearly core sales came at 3.7% against 2.8% expected. The GBP jumped 30 pips higher at first but it reversed lower quickly.

FDI Grows by 14.9% in China – The annualized Chinese foreign direct investment grew by 14.9% as recorded in July, much higher than in June. Although, that is also due to the weakening Chinese Yuan as China fights its battle against US sanctions.

FX Reserves Increase in Turkey – Erdogan urged Turkish citizens last week to convert their forex reserves into the Turkish Lira. But instead, Turkish residents increased their forex reserves by $1.3 trillion combined. No one wants to risk their savings so the president can save face, it doesn’t work like that Mr Erdogan, sorry.

US Unemployment Claims – Unemployment claims came at 212K against 215K expected. Not much of a change and the claims remain stable around these levels.

US Philly FED Manufacturing Index – The Philly FED manufacturing index fell to 11.9 points from 25.7 points last month. This is the lowest reading in more than a year. Employment, prices paid and especially new orders fell dramatically so this is a really bad report. We don’t know if this is due to the trade war that Trump has started or if it is just for one month, so it will have to be seen how next month will be.

US Housing Starts – Building permits came as expected at 1.31 million but house starts missed expectations. They were expected to increase by 1.27 million but instead the actual number was 1.17 million. Another soft data from the US and the USD lost a handful of pips.

Canadian ADP Non-Farm Employment Change – Employment grew by 11.6K in Canada in July. Today’s number brings this indicator back to positive territory after the 10.5K decline that we saw last month.

Trump Praises the Economy – Donald Trump is up and tweeting already. He said that the US economy is doing better than ever with low inflation and high business optimism. Companies’ profits are higher and we are protecting our workers. My view is that inflation is not where the FED wants it, the economy looks OK but there are weaknesses such as the weak manufacturing number we saw just a while ago and wages are not really picking up as they should have. 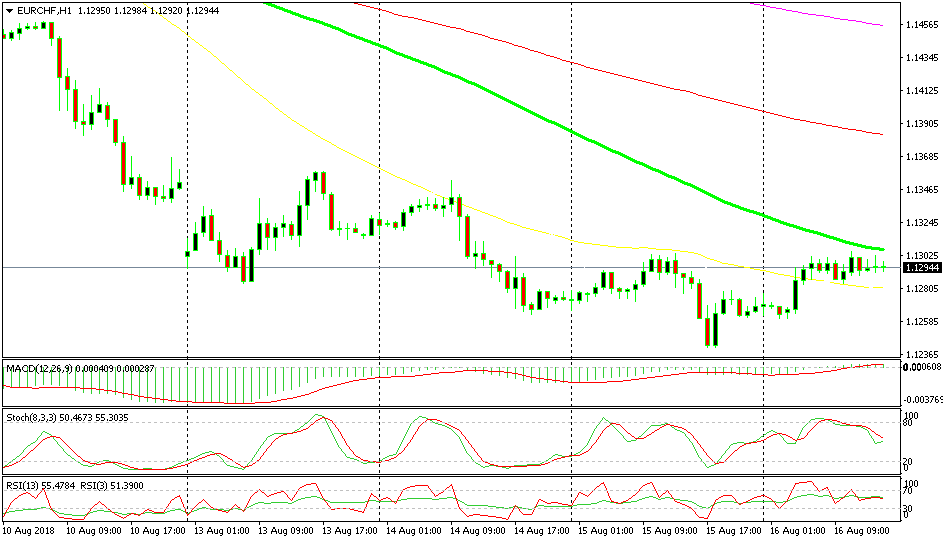 EUR/CHF has been trading on a steep downtrend last week and it continues to trend lower this week, although the downtrend has slowed. The price has retraced higher today but it seems like the retrace is over now. The 100 SMA (green) is already scaring off the buyers and it is likely to provide resistance if they keep pushing higher. The retrace is complete on the H4 chart as well. The 20 SMA has already caught up with the price on the H4 timeframe so it should strengthen the resistance.

So, the UK retail sales report was pretty upbeat but the GBP is still bearish. On the other hand, the US economic data leaned on the soft side but the USD is not really feeling anything. The data is very light for whatever remains of the US session, so trade the sentiment today guys.

Can AUD/USD and NZD/USD Resume Uptrend After the Retrace Lower?
2 months ago