It Has Been A Slow Pre-FOMC Session For U.S. Markets.

If you have been around long enough trading forex, I mean several years, then you should know that markets get pretty quiet for some time in Summer and in Winter. From Christmas until the second week of January and during the entire month of August the financial markets become pretty quiet. Price movements are smaller and slower across all markets and ranges are more visible. This happens because large institutional forex traders go on holiday during these two periods of he year. So, the market changes during these times and we must adapt to these changes in order not to get caught wrong too often.

During holiday periods, markets are usually quite boring, so they tend to be repetitive for longer periods. This means that if an instrument is following a trend, that trend might go on for days and even weeks. Similarly, if a forex pair is trading in a range, it will stay within that range for longer periods than usual. That’s because it takes the price longer to get from one target to another if the price action is pretty slow. This makes it difficult to spot the ranges because the pair might trend for a few sessions until it reaches the other side of the range.

It might be hard to even identify trends because the retraces which often last several hours or several sessions last much longer now. One good example is the retrace in EUR/USD which started the previous Thursday. It looks as a trend in itself but if you look at the higher time-frame charts it is just a retrace of the larger trend. So, we must see the larger picture to identify if the market is trendy or range bound and for this we have to use larger time-frame charts. 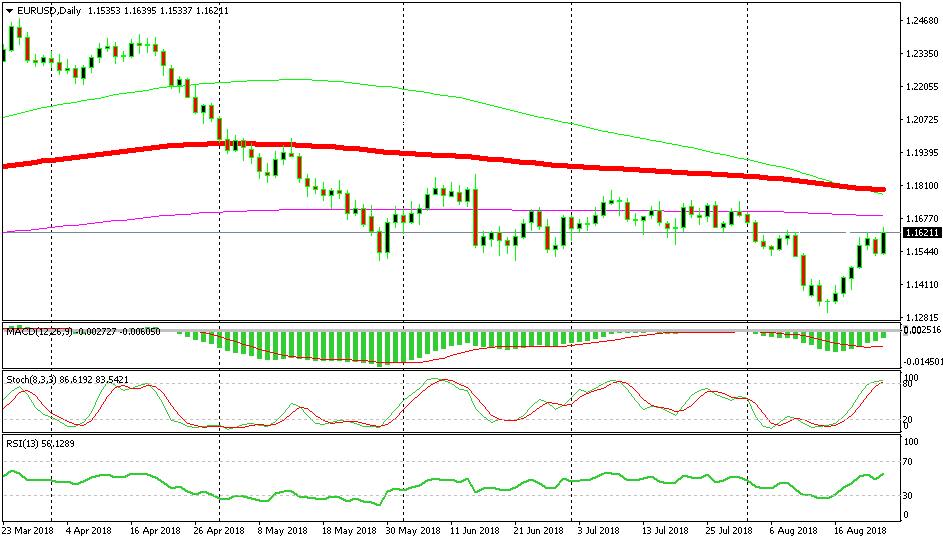 What seems as an uptrend now, is just a retrace of the downtrend

Since the markets are quiet, during holiday periods the price tends to stay quite long close to a support or resistance level. Bounces off of them are not as quick as in normal trading periods. As a result, these support and resistance level might get pierced or there might even be a breakout. But be careful, because these might just be false breakouts before the price retreats inside the range again. Not that there can’t be any breakouts, but they are rarer. As we said, large institutional players are on holidays and robots usually respect these major levels. By the way, algorithms are still on during these periods so it is not as bad as it used to be a decade ago regarding liquidity.

As we repeated many times, the price action is pretty slow during Winter and Summer holiday periods so it takes longer for the price to make similar moves in size. While it may take a few days for the price to go from one side of the range to the other in normal times, in these periods it takes a few weeks. During this time, there will be minor spikes and reversals since liquidity is thin. Be strong and don’t look at the chart all the time. Open the trade, place your targets and let it run its course. Basically, be patient. This week, I opened a forex signal in EUR/CHF around midday and while the price was going in the right direction, it was moving really slow. So, when we were in the evening, I decided to sleep it over because we weren’t going to reach our target before the next day, even though I was sure we would eventually reach it since fundamentals and technicals were both on our side.

Since the liquidity is thinner, the ranges tend to be smaller. Even the trends are smaller. So, we must be prepared to reduce the targets, especially for shorter term trades. I usually keep stop losses the same but reduce the take profit targets during these periods. It messes up the risk/reward ratio but it is quite profitable on such markets. So, if you usually look for 60 pips on an intraday trade, you might consider reducing it to 40 pips, otherwise you will have to let it run overnight.

Trading forex is not that easy of a job. it requires lots of nerves, consistence and hard work to read and analyze the markets and what affects them, such as economic reports, central banks, politics etc. Over the months, it gets pretty tiring and it wears you out, especially emotionally. So, it is advisable that you take a break as well once in a while and there’s no better time than during holiday periods, otherwise, it will get to you and it will affect your trading. Most of forex traders do, so I’m telling this mainly to myself. I do as well, but this year I haven’t and I will take a week off soon. But if you are deciding to be a good soldier and continue trading, then you might want to take a look at these tips for trading in such times.