Today was packed with economic data and I was expecting some good price action in financial markets after seeing only one way traffic in the last couple of days. The US Dollar has been sold off aggressively during this period as the US mid-term elections approach and forex trades fear that Democrats might take the Congress which would make life difficult for President Trump. So, they are closing some of their long positions in the USD

The European session started off with manufacturing reports coming out from the Eurozone and we saw a slight cool off once again in this sector in Europe. This looks bad after the softening of the services sector that we saw in October. The Italian manufacturing performed even worse as the manufacturing production declined. The economic numbers from Canada were pretty soft as well with the annualized earnings slowing down considerably. But, the economic figures from the US were quite upbeat, which gave the USD some much-needed support, although the climb has already stopped. 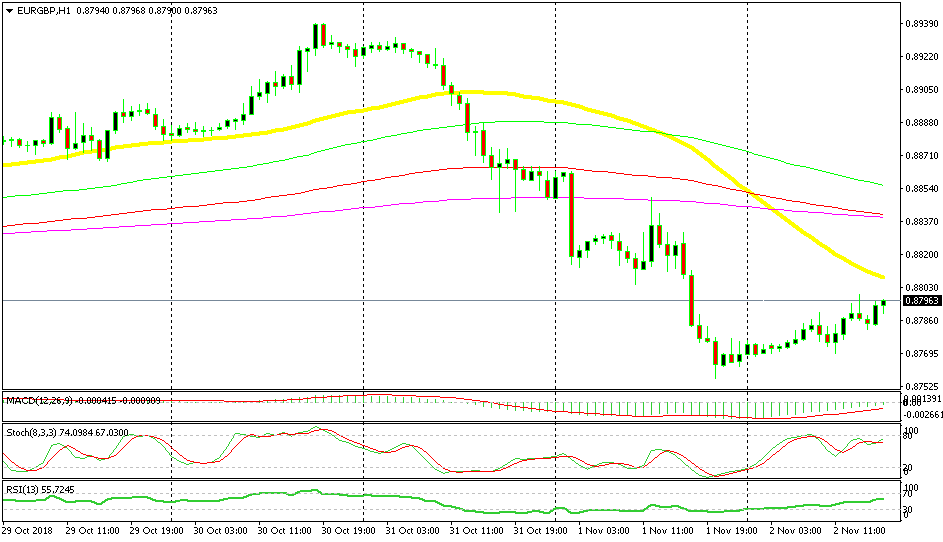 The 50 SMA is catching up

We decided to sell EUR/GBP a while age as this pair was retracing higher on the H1 chart. The trend has shifted for this forex pair as Brexit rumours suggest that we might get a Brexit deal soon. The retrace seems complete now as stochastic is near the overbought levels. Besides, the 50 SMA (yellow) is catching up and it will likely push EUR/GBP lower when it reaches the price.

The selloff in the USD seems to have come to a halt now after the positive economic numbers that we saw come out of the US during the US session. But, I think that we might see another wave of USD selling until the mid-term elections next Tuesday. By the way, I was thinking that elections were going to be held during the weekend, so the uncertainty will continue for another two days in the markets.