On Friday, the market closed with a stronger dollar sentiment as the Greenback pared losses against a basket of currencies. Bulls entered the market after employment report explicated US job growth bounced sharply in October, steering further labor market tightening that could encourage the Federal Reserve to boost interest rates again in December.

On Monday, the market is very likely to trade with a stronger dollar sentiment on better than expected job reports and hawkish FOMC sentiments. Let’s take a deeper look at the economic events & trade setups…

After a strong October employment report in the US, beating economists forecast, adding 250K new jobs and wage growth of 3.1% over the year are adding up to hawkish sentiments from the current FOMC. Although the Federal Reserve isn’t expected to make any changes in interest rate in it’s Nov meeting, Dec meeting is widely expected to show a rate hike by 25 base points.
The Fedwatch indicates 81% probability of Fed raising rates to 2.25%-2.50% at December 18-19 policy meeting. That said, the dollar index seems an attractive investment for swing traders and we may see investment moving in next week. 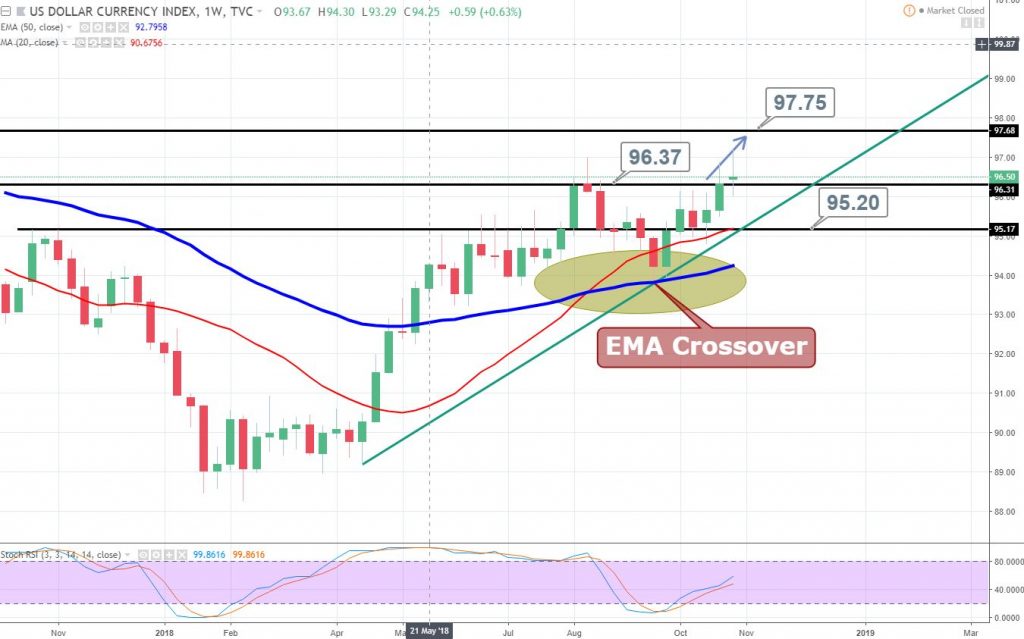 GBP/USD – Series of Fundamentals Lined Up

The British Pound jumped during the previous week on expectations of a Brexit deal and signals from the Bank of England that if the departure from the European Union is smooth, more interest rate hikes could be on the way.

On the weekly chart, the cable took a bullish turn to test the 20 periods EMA at $1.3035, but it failed to give us a bullish crossover. This signifies uncertainty regarding the bullish reversal in the pair. It’s a fundamentally driven week, and we can’t determine much based upon the technicals. However, the pair may face an immediate resistance near $1.3035 and $1.3175 along with a support near $1.2800.

The bullish breakout of $1.3175 is likely to push the GBP/USD into a new trading zone, which may offer further buying opportunities until 1.3335. 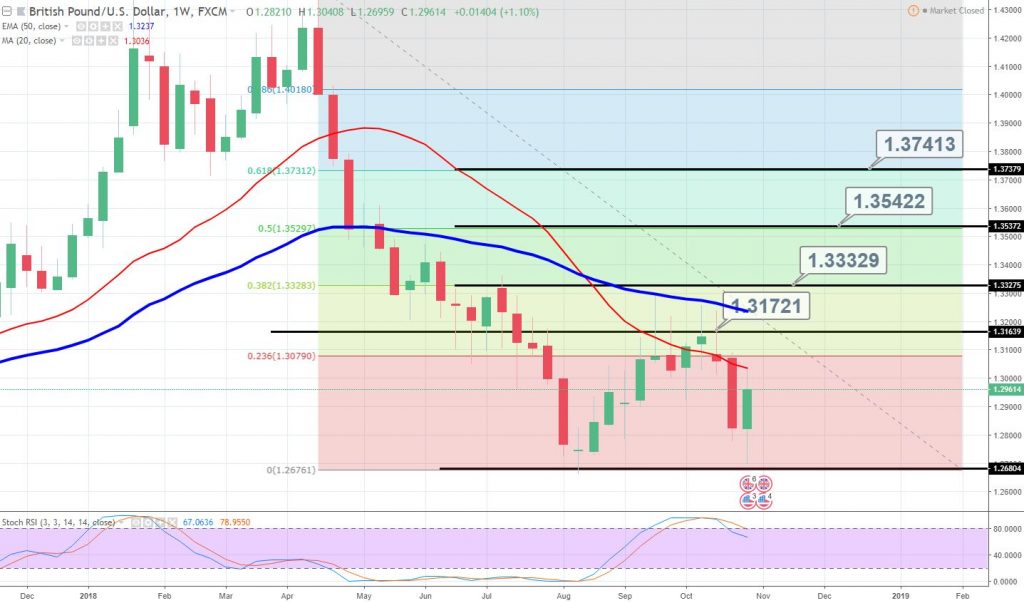 1 – Services PMI – On Monday, the Markit will be releasing the services PMI figures at 9:30 (GMT). Economists are expecting a slight drop from 53.4 to 53.9 which may place massive influence on the pair. However, we should be ready to capture major changes in the data.

2- Gross Domestic Product – The Office for National Statistics is due to release GDP figures on Friday at 9:30 (GMT) with a positive forecast of 0.1% vs. 0.0% growth in September 2018. While the Prelim GDP q/q is also expected to jump from 0.4% to 0.6%.
Fellas, the GBP/USD is likely to stay supported this week in the wake of positive forecasts.

On Tuesday at 3:30 (GMT), the Reserve Bank of Australia will present its monetary policy decision. The odds of any change to the record-low cash rate of 1.50% are minimal. Therefore, we may not see any major change in the AUD/USD. I really wish they change the rates as only then will we have a chance to capture a nice amount of quick pips on Aussie pairs. 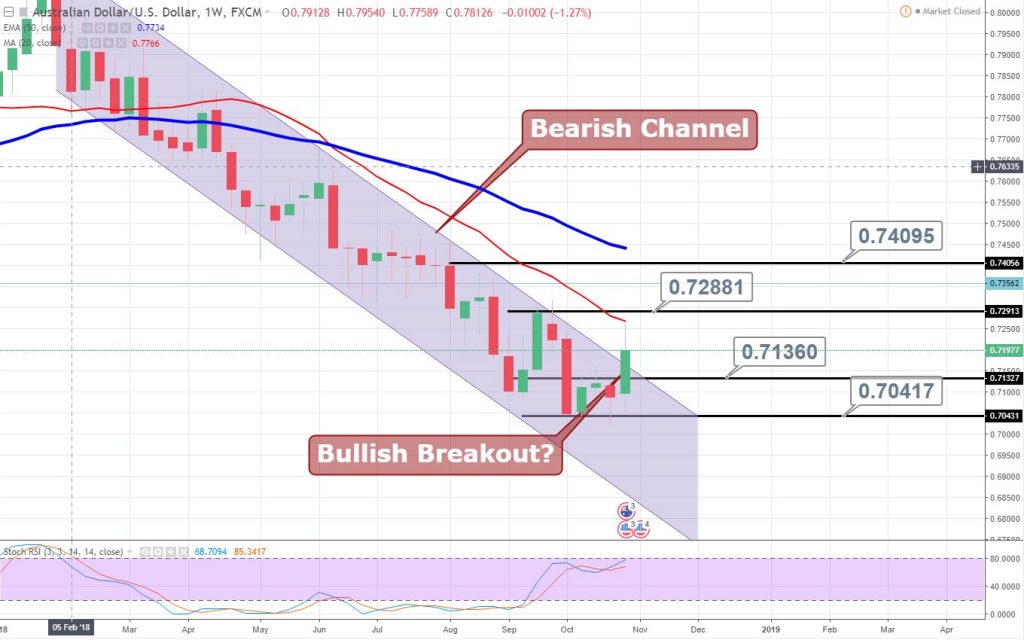 Taking a look at the weekly timeframe, the AUD/USD is peaking out of the bearish channel which was keeping the pair in a tight range of 0.7045 – 0.7190. Thing is, the weekly closing is outside the bearish channel and most importantly it’s a bullish engulfing pattern. It shows a strong bullish sentiment of traders. Therefore the continuation of a bullish trend may lead AUD/USD towards 0.7285 and 0.7400 in the coming week.

On Wednesday at 20:00 (GMT), the Reserve Bank of New Zealand will release the Official Cash Rate. Just like RBA, the RBNZ is also expected to keep it on hold at 1.75%.
Alongside Cash rate, the Rate Statement and RBNZ Monetary Policy Statement will be monitored. The RBNZ Press Conference is also due at 21:00, and I hope that RBNZ Governor Graeme Wheeler will speak up about his future policy actions.
That’s all for now, but stay tuned for live market updates and forex trading signals. Good luck and keep following FX Leaders for another profitable week.

Will We See A Deeper Retreat in Gold Ahead and After the FED, ECB?
4 hours ago
Can the ECB Keep the Rate Hike Pace as Eurozone GDP Contracts?
EUR/USD has been bullish since October, but the move might have come to an end and we are seeing a slow reversal lower ahead of the ECB
6 hours ago