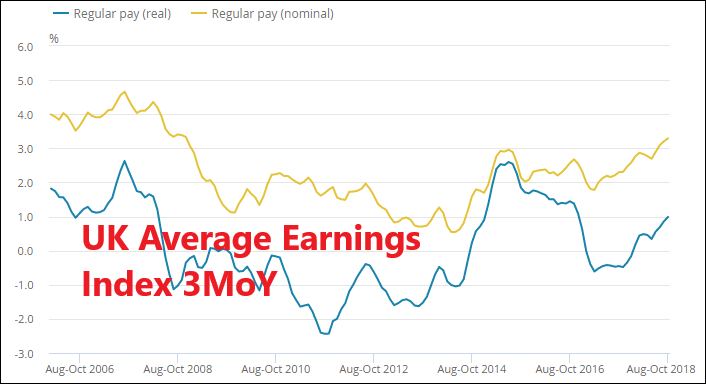 The earnings have been growing throughout the entire year in the UK. There was a small cool off by early summer as growth in earnings declined to 2.4%, but it picked up speed as the year progressed. Earnings increased to 2.6% and 2.7% respectively in July and August, then last month’s report showed a jump to 3.0%.

Today, the 3m/y average earnings index showing the figures from October posted another great number as they jumped to 3.3% against 3.0% expected. Last month was revised higher as well to 3.1% from 3.0% previously.

GBP/USD is around 70 pips higher this morning but that is due to comments and rumours regarding Brexit and because of some USD weakness as well, rather than due to the earnings report. This is because the fundamental numbers aren’t going to show the path for the future of the British economy if Brexit goes wrong and Britain crashes out of the EU with no deal. Anyway, let’s have a quick look at the numbers below:

Apart from the claimant count change, this is a great report. The unemployment rate remained unchanged at 4.1% after having ticked higher last month from 4.0%, but that’s still a very decent level and it is below the 5% natural unemployment rate.

The GBP should have rallied strongly in the higher earnings numbers. In normal times, this great report would set the trend for the weeks to come. But, the UK is not in normal times. We are in the final stages of Brexit and the market cares for nothing besides that regarding the GBP, so keep an eye on Brussels today as Theresa May continues her struggle to close the deal on Brexit .

Sub-Par Metrics Put Pressure On The Greenback
12 hours ago