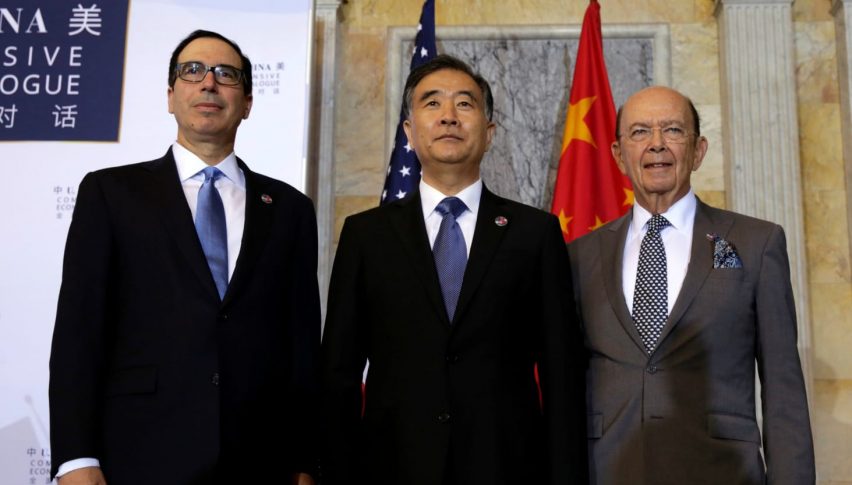 Just like yesterday, the financial markets have been quiet again today, probably waiting for the FOMC meeting minutes which will be released this evening. What’s different today is that the sentiment has turned mildly positive which can be observed in the commodity Dollars which have been crawling higher during the Asian and the European session. The climb in the CAD is another matter since it is following crude Oil prices higher. US WTI crude continues its bullish reversal and it has finally broken above the $50 level today.

The improvement in the market sentiment is due to the positive tones from the US-China meeting. Officials from both countries are having talks on trade and it seems that they have reached some common ground. They will release the statements at the same time tomorrow to avoid the confusion that followed Trump-Xi meeting in the G20 summit about a month ago.

The Aussie is a double winner on a trade agreement because the sentiment will improve and risk currencies such as the AUD gain on positive sentiment. At the same time, that would be good news for the Chinese economy which is in trouble right now, and consequently for the Aussie.

Another highlight during the European session today was the decline in the unemployment rate in the Eurozone as well as in Italy. Eurozone unemployment lost two points falling to 7.9% and the Italian unemployment rate ticked lower too. Stock markets continue to grind higher again today as well as USD/JPY, while GOLD is reversing lower, which means that safe havens are in a bit of a trouble.

EUR/CHF has been on a downtrend for a few months now but it made a bullish retrace higher during the Asian session last night. Although, it couldn’t overcome the 50 SMA (yellow) which has been providing strong resistance to this pair since last week. The price formed a small doji on the H4 chart below that moving average and stohastic was overbought, which means that the chart setup was pointing to a bearish reversal. The reversal is now underway, but the selling opportunity is still on for this pair if you want to trade it.

The market is in a bit of a limbo right now as we wait the Bank of Canada announcement to come out. But, the reason for this is mainly because of the FOMC minutes later on as well as the statement that the US and China will release tomorrow regarding the trade talks.