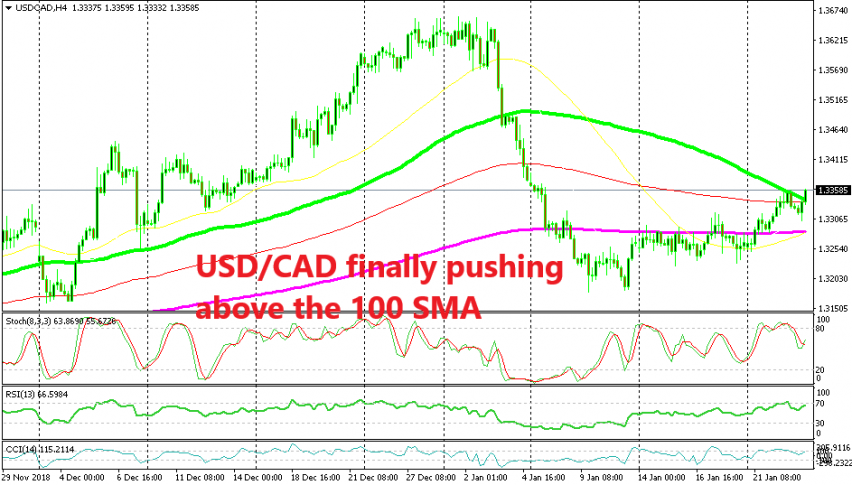 Thje Canadian Dollar had been losing ground for many moths last year as Oil prices tumbled. For that reason, USD/CAD has been on an uptrend for a long time, but it made a big bearish turnaround at the beginning of this month as crude Oil prices climbed more than $10 during that time.

This pair lost around four and a half cents in more than a week, but the climb in crude Oil has slowed down considerably in the last two weeks and as a result USD/CAD has retraced higher as we can see form the H4 chart above. Although, the 100 SMA (green) provided resistance to this pair yesterday, so we were in doubt whether USD/CAD buyers would be able to push above it.

The retail sales report wiped away those doubt though. That report which is for November was expected to be negative already, but it came out even worse. Core retail sales which exclude autos were expected to decline by 0.4% but the actual number came at -0.6%.

The Bank of Canada chairman Poloz spoke in Davos earlier saying that the BOC will decide on the monetary policy depending on the economic data. He sounded a bit optimistic, but he was speaking at the same time as the data was being released, so I suppose he didn’t see that report.

Well, forex traders did, as did we and the conclusion from his comments and the data are that the BOC will turn dovish. All the recent economic from Canada has been pretty weak in the last several weeks, so that makes sense and USD/CAD has just moved above the 100 SMA.

Can NZD/USD Push Above the 200 Daily SMA As Retail Sales Turn Positive?
3 days ago