The Support Holds in Gold, the Range Remains - Forex News by FX Leaders 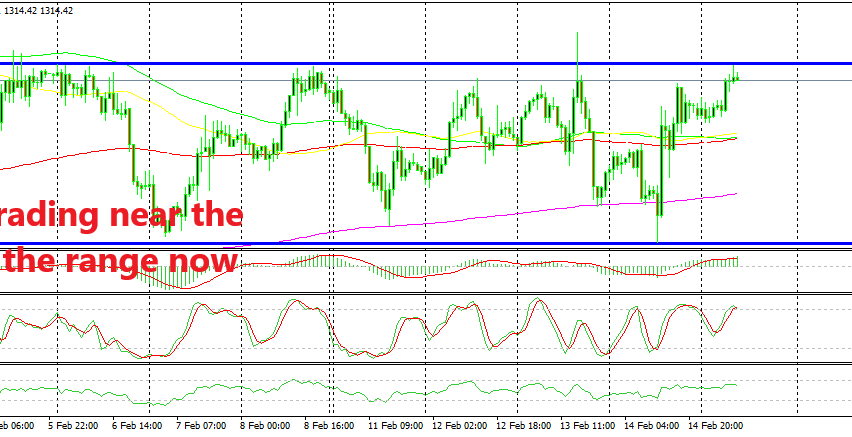 The Support Holds in Gold, the Range Remains

The 200 SMA has been broken, but the range still holds

GOLD has been trading inside a $14-$15 range for two weeks now. It made quite a scene when it broke the big resistance at $1,300 as well as the 100 weekly SMA and it did push around $25 higher in the following days. But it reversed down close to $1,300 again, in what seemed like a retrace before the next move higher.

But, the next move never came. I mean, Gold buyers did try to push higher at the end of last week, but they couldn’t push any higher than $1,31550. The area around that level has now turned into resistance, while the bottom at $1,302-3 has now turned into support for Gold.

This means that Gold has formed a range between $1,302 and $1.315 more or less. The 200 SMA (purple) has provided support during dips a couple of times on the H1 chart, as did the 100 SMA on the H4 chart. But, both those moving averages were broken yesterday while the support zone which now stands a little below these two MAs held. This means that Gold traders are now only trading the range.

Yesterday, sellers were testing the support just before the US session opened, but the US retail sales posted a massive decline for December as we covered in the economic calendar. That sent the USD lower and safe havens in particular higher. That was it for the sellers and the buyers took control.
The Gold trade now has become pretty obvious. Buy near the bottom of the range and sell near the top. So, it would be quite a sensible trade buying at around $1,303 with a stop below $1,3000 and selling at $1,315 with a stop somewhere around $1,318-9, targeting the opposite side. I would also like to get a confirmation of a reversal at either level, something like a doji or pin candlestick before jumping on a trade, so it’s imperative that we watch the price action around those support and resistance levels when GOLD gets there.