Daily Brief, Mar 8 – How to Trade Gold on the US Nonfarm Payroll Today? - Forex News by FX Leaders

Daily Brief, Mar 8 – How to Trade Gold on the US Nonfarm Payroll Today?

Finally, the financial markets moved to violate the sideways trading ranges formed during this week. The credit goes to the European Central Bank, which surprised the market by changing its stance on its tightening plan on Thursday.

Mario Draghi pushed the timing of the bank’s first post-crisis rate hike until 2020. Let us recall, Draghi was previously expected to hike the rate by the end of December 2019. In addition to this, he is also offering banks a new round of cheap loans to help improve the Eurozone economy.

The weaker Euro turned the flow of investments towards the US dollar. As you know, increased demand for the dollar weighs on the precious metal gold.

US Dollar – USD
The NFP (Nonfarm employment change) and the unemployment rate, both events are closely monitored and typically drive massive volatility and trading volume in the market. The Bureau of Labor Statistics is due to release these figures at 13:30 (GMT).

According to economist forecast, non-farm payrolls data point to around 180k jobs added in February, after January’s much stronger-than-expected 304k print.

Comparing the NFP forecast with the ADP nonfarm figure, the sentiment remains negative. On Wednesday, the ADP Nonfarm figure came out worse than expected at 183K vs. 300K previously.

What to expect from Nonfarm Payroll?
It appears that the Greenback is less likely to strengthen on the news release (180k forecast) as it’s far from the previous month’s report of 304k jobs.

Moreover, traders will be pricing in the negative ADP data ahead of actual NFP release today, making the dollar weaker and rest of the pairs stronger.

The February unemployment rate is expected to have slipped to 3.9% from 4.0%.

Average Hourly Earnings m/m – In addition to the nonfarm payroll and unemployment rate, we need to focus on the average hourly earnings. Average hourly earnings are expected to have risen by 0.3% month-over-month or 3.3% year-over-year after the slight 0.1% m/m increase last time (3.2% y/y).

On Thursday, we remain fortunate as our forex trading signal in gold closed at take profit at $1,281 and reversed right after that. Perhaps investors felt less confident about violating the downside range without major economic releases.

At the moment, you can see a tug of war between bulls and bears. The market continues to trade in the same range of $1,290 – $1,281 until the release of labor market figures. 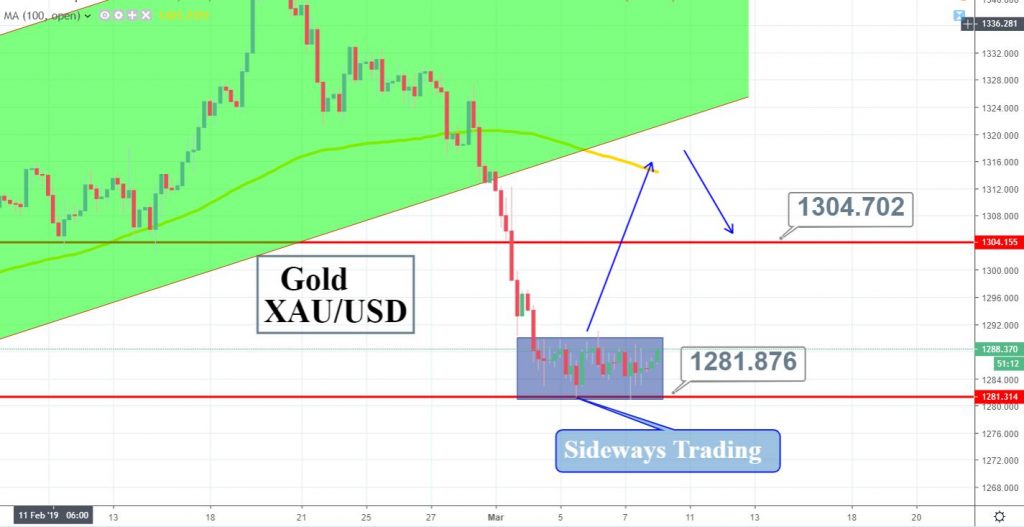 On the technical front, gold can go for a correction up to $1,296, but the focus will remain on the US labor market report today. A positive report may cause a bearish breakout, while negative results will improve sentiment for the buyers.

All the best for today and have an awesome weekend!

Arslan Butt // Index & Commodity Analyst
Arslan Butt is our Lead Commodities and Indices Analyst. Arslan is a professional market analyst and day trader. He holds an MBA in Behavioral Finance and is working towards his Ph.D. Before joining FX Leaders Arslan served as a senior analyst in a major brokerage firm. Arslan is also an experienced instructor and public speaker.
Related Articles
Crude Oil Extends its Overnight Winning Streak - All Eyes on EIA Data!
During Wednesday's Asian trading hours, the WTI crude oil extended its gaining streak and edged higher towards above mid-$52. However, the b
1 hour ago